After the death of 56 lawyers

Six months after the August 8 blast in Quetta that wiped out an entire generation of lawyers, a visit to the Kutchery shows how the wounds of the community are still fresh 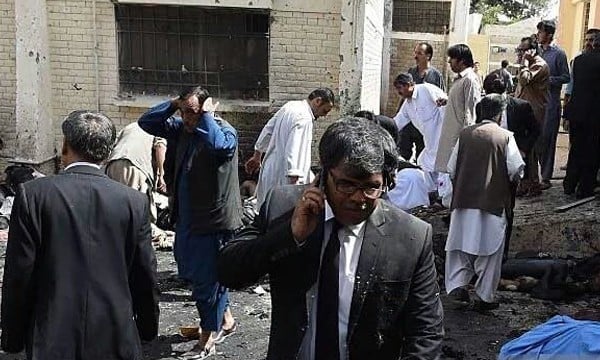 On the morning of August 8, 2016, the emergency ward of Civil Hospital Quetta was crowded with lawyers and media persons. More and more lawyers were coming to the hospital, after hearing the news that the Bar President Bilal Anwar Kasi had been shot dead earlier in the morning.

There were too many lawyers in the premises of the hospital, and as the CCTV cameras would show later there was a mysterious man moving impatiently in that crowd. According to the police sources, the same mysterious man exploded himself and wreaked havoc outside the hospital. 56 lawyers lost their lives and 89 suffered wounds.

Fast forward to March 2017, exactly six months later, there is still a sense of fear in Quetta Kutchery. The traumatic wounds caused by the August 8 attack are still fresh. In Kutchery, one can find several wounded lawyers who just come to meet their fellows and are still not fit to resume their practice.

Security threat alerts and change of security plans are a normal routine. Life has never been the same for the legal fraternity of Quetta ever since the dreadful August blast that is said to have wiped out an entire generation of lawyers in the city.

A visit to Kutchery, which is the third tier court in Quetta, reveals a lot of issues which have largely been ignored by the media as they cover Balochistan. Fear among the lawyer community has compounded with the passage of time; many newcomers are quitting the field. Although no statistics available on how many lawyers have quit the profession after the Civil Hospital blast, at the Kutchery you do meet people who know such lawyers who have left the field.

Wounded lawyers in the attack are also facing pressure from the families to quit the profession given the threat level attached to it. One such lawyer is Abbas Kakar Advocate who suffered severe body burns in the fatal blast. He is still going through treatment and unbearable trauma. "My parents ask me to stop being a lawyer because of what it has done to me and them," he told TNS.

Imran Baloch Advocate is a newcomer in the field. On the day of the blast, some colleagues of Baloch lost their lives while others were wounded. He survived because he had left for home to get some rest in the morning after spending a busy night campaigning for the bar elections. "Still the environment of fear prevails in the courts; both judges and lawyers get alarmed while seeing a strange person and avoid gatherings even inside court," he said.

At the moment, the scenario for legal fraternity in Balochistan is bleak: newcomers quitting the profession, wounded lawyers still facing the trauma, conflicts within the lawyer community and allegations of corruption clearly prove the collective failure of society.

Kamran Murtaza Advocate, Vice Chairman of Pakistan Bar Council, alleged that "the careless issuance of threat alerts by the government to courts is further increasing this sense of insecurity among lawyers and increasing".

Moreover, the effect of the loss of so many lawyers has been catastrophic for the institution of bar and bench in the province. "After the death of an entire lot of senior lawyers, legal profession has been severely affected in Balochistan," says Murtaza who was also former president Supreme Court Bar Association. He explained to TNS "now public can’t get lawyers of their choice; there is a huge burden of cases on the surviving senior lawyers and that has further reduced the pace of judicial system in Balochistan".

Another problem for junior lawyers is that there are not enough senior lawyers from whom they can learn legal practice. Most senior lawyers who lost their lives in the blast had eight to ten trainee lawyers working under them who are now facing trouble finding new mentors.

"Death of 56 lawyers, most of them seniors, has made the learning process very slow for newcomers in the field," said Imran Baloch Advocate. "On one side, there is shortage of lawyers and on the other hand the newcomers who have to fill the gap are facing a hard time just to learn the normal practice."

Baloch added that many junior and inexperienced lawyers have started their own chambers "due to absence of seniors and this is deteriorating the quality of judicial system in Balochistan. Moreover, the strikes by bar leaders have slowed down the process of legal work, and daily wagers dependent on the legal system for their livelihood are facing problems as a result".

Unfortunately, like every other sector of life, corruption has made inroads in the legal profession too. The government of Balochistan had announced compensation for the slain and wounded lawyers. Bar leader devised formulas to distribute the compensation money among the wounded lawyers and this has led to serious allegations of corruption in the process.

One bar group blamed the other for classifying their relative lawyers as more seriously injured so that they could get higher amount of compensation money. In fact, a constitutional petition is pending in the Balochistan High Court against the issue of corruption in compensation.

Talking to TNS, Kamran Murtaza conceded that, unluckily, people within the ranks of the bar have exploited a tragic situation such as the civil Hospital blast. "It’s a harsh reality of our society that people forget everything to protect their self-interests."

Expressing dismay over the allegations of corruption within the bar community, Anwaar ul Haq Kakar spokesperson of the Balochistan Government said that it’s an internal matter of bar and we will not intervene in it. "The government of Balochistan will do whatever is possible to revive the judicial system in the province. We will take every decision after coordinating with the lawyers and judges."

At the moment, the scenario for legal fraternity in Balochistan is bleak: newcomers quitting the profession, wounded lawyers still facing the worse form of trauma, conflicts within the lawyer community and allegations of corruption clearly prove the collective failure of society.

After the death of 56 lawyers