A talk on journalism to school children from across cultures 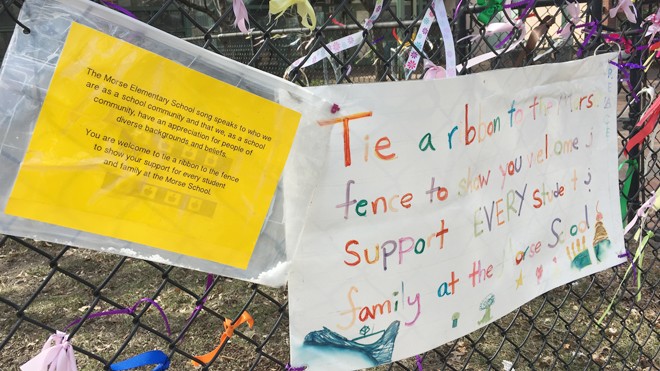 "Did you see our ribbons? They are for immigrant families," says Emma, one of half a dozen 9 and 10-year olds I’m talking to about journalism on a bitterly cold weekend in March.

Sally Dewart, a young teacher in my neighbourhood who teaches at Morse, a public school in Cambridge MA, has invited me to her Saturday morning writing enrichment class in the school library.

Tell me about the ribbons, I say.

"We tie ribbons to the fence to tell immigrant families that we support them," explains Lily.

"We want to tell them they’re safe here", says Will.

The action reflects the school song, We are One. They sing a few lines: "We are one heart, we are one land, we are children and people from many different lands…"

Cleaning up the activity they’re doing on the floor when I arrive, they’ve pulled up extra chairs around the little square table where I’m sitting with Sally. Some place open, lined notebooks on the table. Their teacher has prepared them well -- they have written questions for me.

"What kind of people do you interview?"

"How do you approach opinion pieces?"

"What type of stories do you write?"

"How busy does your work keep you?"

"What part of the job do you like most?"

That’s just the start. They want to know the difference between creative writing or fiction and journalism. I tell them that journalism is based on facts. Fiction doesn’t have to be. Journalists should also present information in a contextual way to give a fuller picture, even if they don’t like it. Creative nonfiction, a new term for them, requires as much research as journalism but can be expressed more imaginatively.

People want to be acknowledged and affirmed. The selfie-culture that’s sweeping the world isn’t just about narcissism, but the human need to be remembered.

I talk to them about journalism basics like the five Ws and the H, about hooks, pegs and beats. They have questions about everything.

Impressed by the girls’ assiduous note-taking, I talk about the importance of note-taking. There’s a study about how writing by hand stimulates the creative process and brain, compared to typing on a keyboard. As a compulsive note-taker, that’s a good thing to know. I know I really should type up my notes afterwards for easier reference, but am often too lazy to. They can relate.

These fourth and fifth graders are already curious about how the news gets reported. They are questioning the information they hear or see on TV.

Michaela recalls a headline about Brad and Angelina breaking up. She doesn’t think it merited that kind of attention. The others agree.

Most of the news is negative, they observe thoughtfully. News is also sensationalised and hyped up to gain ratings and readership, for commercial interests, explains Sally.

This is a whole new generation. It is a bit of a shock to learn that some of them haven’t heard of 9/11. But others have. They share the information respectfully, without trying to put down the ones who don’t know.

The political awareness of these kids is at a different level. They are grappling with the world around them, questioning and engaged in a way that indicates the changing nature of politics in America. Their families are talking politics more than before.

The students talk, hesitantly at first, then more openly, about their shock on waking up on the morning after the presidential election results. "My brother cried," recalls one.

I talk to them about the ‘instant’ nature of today’s 24/7 news. Like oatmeal.

Right, I said, and it isn’t as nutritious as the kind that takes longer, that you soak overnight and cook for 30 minutes. The preparation is an important part of the process. It’s not just about filling your tummy. Information is important but there are problems with instant news.

A talk on journalism to school children from cross culture

By Beena SarwarThey agree. "Because you can make mistakes".

"Yes, and you can also miss out on context and keeping things in perspective".

Is Lily holding out her hand to ask a question, I wonder. Turns out it’s a new hand signal - a rocking motion with thumb to chest, first three fingers folded in, and pinkie finger pointing at me.

It means "I connect with you" and "I like what you’re saying," they explain.

We discuss context and the need to obtain all the facts to get a fuller picture. "This enriches and informs our stories even if we don’t use all the details and quotes we may have," I explain.

One factor behind the shock of the election results, I suggest, is that journalists were too focused on sensational things, gaffes - "booboos, mistakes or the outrageous things" - rather than substance and context. Journalists tend to be college educated, middle class and based in the cities. Mainstream media journalists didn’t really go to people outside their own areas.

The students connect non-verbally with my comments.

"Will you write about us?" they ask.

"Yeah! Put us in the newspaper," says Michaela, half-jokingly.

Their desire to be "in the news" reflects what I believe is one of the key roles of journalists - to ensure that the voices of those who are under-represented get heard. People want their being to be acknowledged. The selfie-culture sweeping the world isn’t just about narcissism. It speaks to the human need to be affirmed and remembered. I was here. I was a witness. I said this. I thought this. See me. Hear me.

The half hour I had planned for ends up being nearly an hour. It is nearly noon as we wrap up. "I’m hungry," says Liam. I crack open the molasses spice cookies from the goody basket Sally has just presented me, creatively crafted from a brown paper bag scrunched into basket shape, covered in purple paper. Molasses spice is an apt flavour for today’s thoughts about pluralism, diversity and inclusivity.

In the lobby, the school principal, in jeans and checked shirt bustling between her office and the auditorium across the hall, makes it a point to thank me for coming in. "We want our students to have exposure to people from different fields," she says, shaking my hand warmly.

Stepping out into the below-freezing cold, I stop and look at the ribbons tied to the school fence to show support for immigrant families.

This is what makes America great, I thought. Here’s looking at you, kids. And teachers.