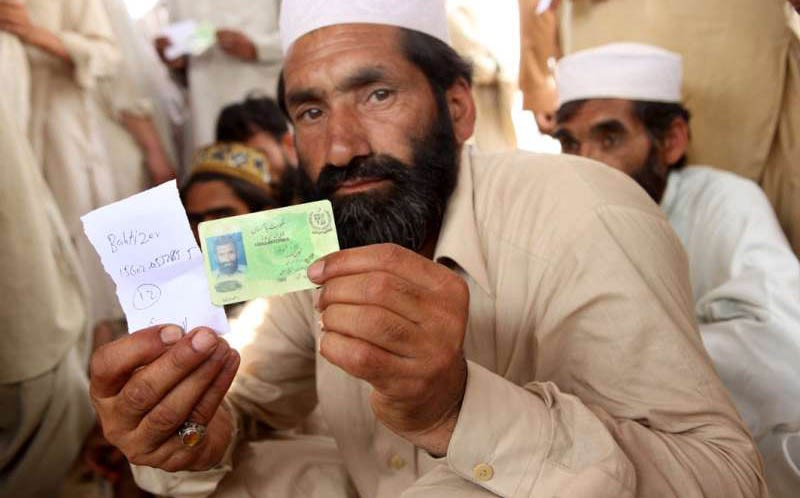 Haji Baghi Khan is the vice president of Pashtun Falahi Tanzeem, Lahore and President Anjuman Taajran, Lytton Road, Lahore. On any particular day, he sits in his small but clean office and attends visitors in large numbers. These are mostly Pashtuns who share their problems with him and request him to get these resolved.

Khan is always keen to help them, as it gives him immense satisfaction, even if it consumes his precious time and affects his financial earnings. He goes to the police stations, traffic police pickets, local government offices, hospitals, almost everywhere, with people of his community, and uses his contacts to help them out.

The other day, he was visited by a team of rickshaw owners and drivers with a complaint that policemen are not allowing them to park their three-wheelers at parking stands at Ayubia Market, Muslim Town. "Their only crime is that they are of Pashtun origin. They are asked to show their CNICs and those who comply are allowed to leave. But in any case, they are not allowed to park there at night."

Khan says, "Nadra has denied issuance of CNICs, B-forms, etc to hundreds of Pashtuns over the last couple of years. The complexities involved in getting the already issued CNICs add to their worries".

The requirements include filling the gaps in the family tree, producing any documents that date back to the times when Afghan refugees had not arrived in huge numbers, clearing themselves in case there is any "intruder" in their family tree, getting an endorsement from a focal person/political agent in their respective districts and preferrably approach the Nadra branch office in areas where their ancestors belonged.

By the word "intruder," Nadra means any person who is not related but has been issued CNIC on the basis of identity card of any members in the family, produced as a supporting document.

Read also: Stereotypes we live with

Muhammad Asghar, a Pashtun who runs a small cloth business at Azam Market, explains that the whole issue is about differentiating Afghan refugees from local Pashtuns but, unfortunately, the burden of the proof is on the latter. "Many CNICs were issued fraudulently to Afghan refugees by showing them as relatives of local Pashtuns in ID card records. But this was done without the knowledge of the people whose cards were being used for this purpose."

Sources in Nadra tell TNS that the authority admits many such irregularities have been the fault of registering authorities at the centres but puts the burden of proof on the applicants.

Asghar says Nadra officials have acknowledged the fact that some Afghan refugees had obtained Pakistani CNICs in this way. "Having these cards is a compulsion for those who want to buy property, open bank accounts and so on. Those who do not go for this option buy property or run business in the name of a local."

However, he adds, they have a very good reputation as far as fulfillment of written and verbal commitments are concerned.

In one case, for instance, a shop owner in Auriga Complex had 70 children, as per Nadra record. "What had happened was that the copy of his identity card had been used many times to show a non-genuine person his relative. This was more common and easy when the records were maintained manually and the existing sharing of computerised data was not introduced."

There is another case where a girl, Sobia Sharif, has not been able to get her CNIC issued. She lives in Daroghawala. Her ancestors had migrated from Mohmand Agency in the 1950s. The reason for inordinate delay, she says, is that 13 suspicious CNICs have already been issued on the basis of her father Muhammad Sharif Khan’s CNIC. Her CNIC cannot be issued till this issue is resolved. A person shown to be her sibling in Nadra records is older than her father. "If this can happen right under the nose of Nadra anything is possible," she says.

Sources in Nadra tell TNS that the authority admits many such irregularities have been the fault of registering authorities at the centres but puts the burden of proof on the applicants. The sources also claim that Nadra’s registration policy is a uniform policy implemented across the country that deals with all citizens of the country equally. "The policy does not single out any particular language-speaking people," they add.

The local Pashtuns without CNICs or blocked/expired ones face problems in getting marriages registered, enrolling children at schools, opening bank accounts, finding houses on rent, visiting places where they are supposed to go through biometric verification and dealing with police.

Arif Nawaz, Additional Inspector General, Punjab Police, tells TNS that they have instructions to get the identity of a Pashtun, unable to produce CNIC, confirmed by the focal persons of the concerned district.

He says another instruction is that Pashtuns will not be checked at checkposts if they have been issued verification certificate by the district police office. He dispels the impression that local Pashtuns, who are unable to prove their roots in Pakistan will be sent forcefully to Afghanistan. There are other mechanisms as well that will be used to establish their identity, he says.

In Balochistan, Hazaras face similar scrutiny along with Pashtuns for their ethnic links with Afghanistan. Baloch are wary that the presence of Afghan refugees in the province having Pakistani CNICs will affect their numerical strength in the province.

While Nadra claims that the laid out conditions are just to ensure transparency, Pashtuns are apprehensive. Azam Khan from Swat says he has come from down-country just to get verification for issuance of his domicile. He questions how can people produce ration cards issued in the 1960s and 70s to their ancestors -- a precondition imposed by Nadra -- if they do not have it or they cannot visit their ancestral areas due to security-related restrictions imposed by the state.

Nadra strategy comprises of data analysis schemes for verification, including across the board fraud detection and mathematical modeling for identification of aliens, amnesty schemes, establishment of helpline, and family tree intrusion detection through SMS.

As per Nadra records, more than 100 million SMS were sent to family heads asking them to verify their family members and around 86,380 intruders were identified during the six-month campaign. The federal interior minister has formed an 18-member parliamentary committee to oversee the verification process of CNICs. The committee, that has held several meetings with Nadra authorities, is likely to come up with recommendations by the next week.

This article was published in The News on Sunday on March 05, 2017 under the title Identity crisis.