Who are you? When did you come here? Where do you work? In an effort to re-verify and gather data, a Pashtun is being treated as a suspect 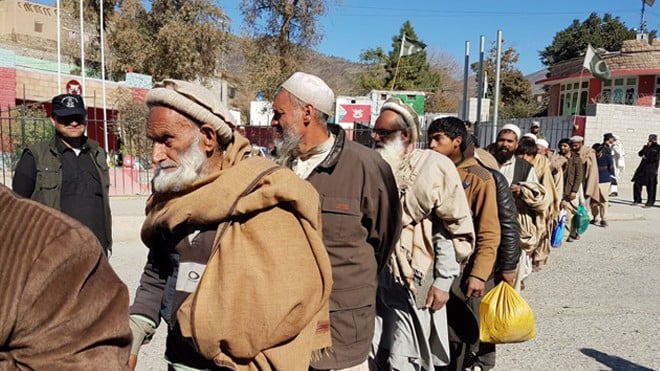 A Pashtun living in Punjab is under scrutiny. He is being interrogated with simple but discriminatory questions like: Who are you? Size of your family? Duration of your stay? Number of visits made to Afghanistan? Do you know Taliban? And, then, he is further demeaned. When did you come here? Where do you work? Why did you marry in Lahore? Number of children studying in madrassas? What is nature of your job/business? Where are your other relatives living in Fata and KP?

In an effort to re-verify and gather data, a Pashtun is being treated as a suspect.

According to sources in the intelligence agencies, around 100 to 120 people, mostly Pashtuns and Afghans, have been taken into custody in the ongoing search and combing operation. Those who are able to satisfy the interrogator are left untouched. And those arrested are cleared only after biometric testing and sureties.

Pashtuns, the second largest ethnic community in Pakistan, feel alienated in Punjab due to the ongoing operation of the law enforcement agencies against them.

Operation, or racial profiling, carried out by the law enforcement agencies are expected to last for an indefinite period. Pashtuns, mostly hailing from Fata and KP, are forced to leave their homes and businesses/jobs in Punjab. Some are risking their children’s educational future too.

Since 2001, Pashtuns have been fighting for their survival. Viewed as ‘suspects’ due to their ethnicity, physical appearance, and their roots in the bordering areas of Afghanistan, they have suffered irreparable losses in drone attacks, mostly in Fata.

Read also: "Pashtuns are the real victims of terrorism"

Even in 2004, Punjab and Sindh banned them from entering into the provinces as a military operation in Wana was launched

"We are planning to pack up and leave in order to save our families from permanent torture and trauma," says Nazia Shinwari in Shafiqabad, Lahore. "We were first displaced from Fata when military operation began in the area. Now we are going to be IDPs again in the wake of fresh operation in Punjab."

The KPK Assembly has adopted a joint resolution against the Pashtun crackdown in Punjab. Awami National Party President, Asfandyar Wali Khan, has warned of "forced deportation of Punjabis" from KPK if the crackdown continues against Pashtuns in Punjab.

Seventy-year-old Darya Khan, came to Lahore from Swat, and settled in Baghbanpura with his family for a safe future in 2007. "I cannot let anyone storm into my house, body search my male and female family members, turn everything in my house upside down in the name of a combing operation," he says with tears in his eyes. "I have asked my sons to leave this place than live a life of insult."

People generally doubt the Pashtuns because they cannot differentiate between registered or unregistered Afghans and local Pashtuns due to their resemblance.

Sources reveal that during the re-verification operation, the Rangers and police have busted around 2,817 Afghans. More than 110,00 Afghans have been registered under the biometric system in one year. Police have also registered 1,752 FIRs against illegal Afghans so far.

"Among the public, there is unrest against the Afghans living in our streets and towns. They want to get rid of them come what may," says Lt Gen (retd) Abdul Qadir Baloch, Federal Minister of State and Frontier Region, talking to the media.

Waheed Chattha, a resident of Thokar Niaz Baig, says he does not want Pashtuns in his neighbourhood. "My neighbour wanted to rent out his house to a Pashtun family last month but other neighbours stopped him from doing so. They said they do not want to see law enforcement agencies raiding the neighbourhood."

A property dealer at Fateh Garh is always reluctant to make a deal with a tenant that even vaguely appears to be a Pashtun or Afghan. "In many cases, they are subject to a security operation, affecting the reputation of the property dealers".

Of late, some markets have asked Pashtun-looking vendors to stay away from their area. Some trade unions circulated letters to all Pashtuns working in the markets to submit their documents in union offices for police verification within 48 hours. Tandoor owners and small restaurants are doing the same. Some letters allegedly by the police department encouraged unnecessary discrimination.

Of late, some markets have asked Pashtun-looking vendors to stay away from their area. Some trade unions circulated letters to all Pashtuns working in the markets to submit their documents in union offices for police verification within 48 hours.

Jamaat-e-Islami (JI) member and KP Local Government Minister, Inayatullah Khan, says hotels have received instructions in Punjab not to rent out rooms to those looking like Afghan refugees or Pashtuns.

According to reports, Nadra is planning to suspend Computerised National Identity Cards (CNICs) of Pashtuns living in Punjab. A Pashtun complainant seeking anonymity says Nadra representatives are using delaying tactics. "It appears I will not be issued my CNIC and I know the reason because they consider me a suspect," he says.

"Nadra has blocked or refused to renew CNICs of more than 100,000 Pakistanis," say a source at the CM Punjab secretariat.

DIG Operations, Haider Ashraf, tells TNS that it’s across-the-board operation, not targeted against any community. "With its various dimensions -- detective, preventive, combing operation, and intelligence-based -- we have been checking and rounding up suspects. We cannot share the details about how many and who are detained as the issue is of sensitive nature," he claims.

SP Civil Lines Division, Ali Raza, seconds Ashraf when he says that it is a data verification operation to record identity and history of a person. "We are going everywhere and those found suspicious are rounded up. The person is released once he is cleared," he says. He confirms that during this extensive operation not a single Pashtun was rounded up or so far found to have any link with terrorists.

An official from the Counter Terrorism Department (CTD), who does not want to be identified, says Pashtuns are highly prone to be suspected. He says the Mall Road blast and Gulshan Iqbal blast proved their connections with terrorist organisations. However, during the current drive, we are unable to lodge an FIR against them due to not detecting any clue of their association with the TTP.

The KP Assembly has adopted a joint resolution against the Pashtun crackdown in Punjab. Awami National Party President, Asfandyar Wali Khan, has warned of "forced deportation of Punjabis" from KP if the crackdown continues against Pashtuns in Punjab.

In order to review the situation, KP assembly speaker, Asad Qaiser, and a few ministers are visiting Punjab on March 6. In a discussion on the media, Khurshid Shah, National Assembly Opposition Leader, termed Pashtun victimisation in Punjab as a stark threat to the integrity of the federation. "It is an undeniable fact that the state admitted existence of Punjabi Taliban with the allegation of local patronisation. But all this does not allow rulers to target Pashtuns," he says.

In order to control the situation, Amir Muqam, advisor to Prime Minister in KPK, rushed to Lahore and met the party leadership and officials at the law ministry. Later, Chief Minister Punjab Shahbaz Sharif and Law Minister Rana Sanaullah had to do some damage control, issuing statements that Pashtuns have the right to live in Punjab.

An ISPR press release says that operation Radd-ul-Fasaad is across-the-board and targets all terrorists, regardless of their ethnic or provincial affiliations. "Anti-Pakistan factors might be fomenting this controversy in a bid to exploit the faultlines in Pakistan," it adds.

HRCP Chairperson, Zohra Yusuf, condemns racial profiling and crackdown against the Pashtun community, particularly in the event of any terrorist activity. "We will not tolerate a Karachi-like crackdown in which nobody knows how many and who are busted, why are they detained and when will they be released. We want transparency during the operation in Punjab and the entire Pakistan," she demands.

“Crypto-currency can be of great benefit to Pakistan…”