A look at the early 20th century Russia 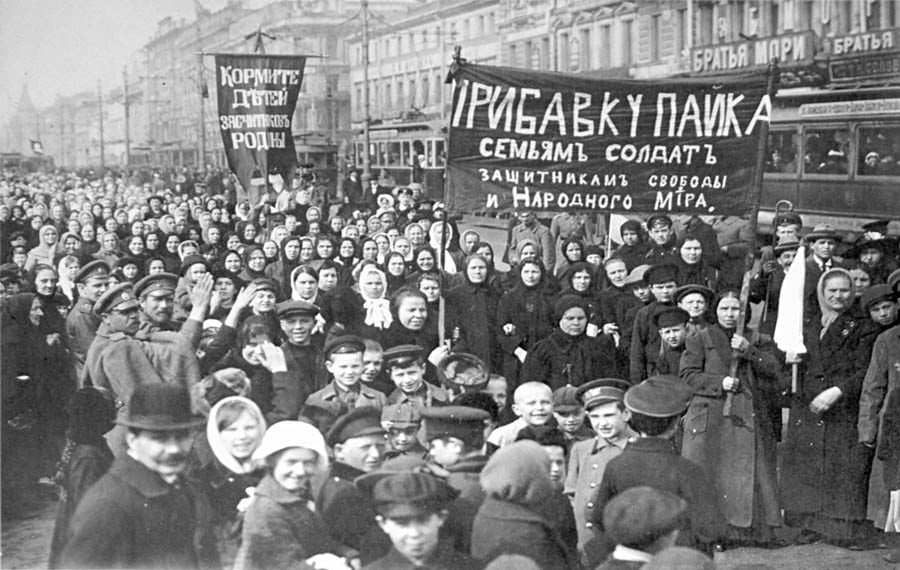 Many people think that the Russian monarchy was abolished by the Soviet Revolution in October 1917 that ushered in a new era of socialism. Though, the most talked about revolution in the 20th century was the Great October Revolution, it was the revolution that took place exactly 100 years ago in February 1917 that got rid of the monarchy and paved the way for the Bolsheviks to take over power in an almost bloodless coup eight months later; most blood was shed after -- not before -- the revolution.

Interestingly, in the February 1917 Revolution neither Lenin nor his Bolshevik Party played an important role; Lenin was out of country and the Bolsheviks were just one of the groups vying for power and that too from the sidelines. In the mainstream of the Feb Revolution, there were other leaders and parties that played a more prominent role to get rid of the Russian Emperor and established a provisional government, only to be overthrown the same year.

The purpose of this article is not to write about the Bolshevik Revolution, which may be covered in a later article. Here we look at the relatively lesser known events, parties, and people that dominated the Russian politics in the run-up to the upheavals in 1917.

From the start of the 20th century, Russia’s economic problems grew steadily worse. From 1900 to 1915, the country was facing virtual economic collapse and the industry was moving into crisis after crisis. Shortages of materials and goods were growing worse and even the army lacked supplies and weapons. Whenever the Romanov Emperor Nicholas II ventured into war -- such as in 1904 against Japan and in 1914 against Germany -- millions of farmers were conscripted into the army leading to a serious shortage of manpower on the farms and fall in food production.

Emperor Nicholas II, on the throne since 1894, was not a competent leader and his ministers were almost uniformly reactionaries. Perhaps the first major event that led to a series of revolutions from 1905 to 1917, took place in January 1905 when an increasing Russian presence in the Far East provoked the Japanese to attack the Russian army and precipitated defeats that dissolved the tenuous support held by Nicholas II and his unpopular government. Following the Russian defeat at the hands of the Japanese, the first revolution took place in 1905 forcing the emperor to grant concessions to the reformers in the shape of a constitution and a parliament or Duma.

The power of the reform movement was founded on a new force that entered the Russian politics in the shape of local political councils or soviets. The soviets were largely influenced by the Social Democratic Party -- founded in 1898 and split in 1903 into Bolshevik (majority) and Menshevik (minority) -- forcing Nicholas II to issue the October Manifesto in 1905. This document marked the beginning of the end to unlimited autocracy in Russia and a constitutional monarchy started to take shape. The emperor could either establish a military dictatorship or grant a constitution, so he issued the October Manifesto promising civil liberties e.g. freedom of speech, press, and assembly.

The power of the reform movement was founded on a new force that entered the Russian politics in the shape of local political councils or soviets.

Establishing a broad franchise and creating a popularly elected legislative body (the Duma) was a major promise of the new manifesto. But no sooner the revolution weakened, in April 1906 a new set of laws -- called the Fundamental Laws -- was enacted according to which the Duma was to have two houses with only one to be popularly elected and that too with limited control over the budget and none at all over the executive. The civil and suffrage rights turned out to be far more limited than promised by the manifesto. So did the Duma come into being?

If yes, did it survive? Again if yes, what did it do and who were the major players and who were they influenced by? Much before Lenin, the people who influenced the Russian politics included scholars and writers such as Chernyshevsky -- who in prison wrote the utopian novel, What is to be Done? -- and Herzen who wrote about literature and politics arguing that the peasants should organise themselves into communes and rebel against the power of the large landowners. In practical politics, there were leaders such as the Marxist revolutionary, Axelrod, who was 20 years older than Lenin.

Axelrod was initially influenced by Anarchist Bakunin, but later collaborated with his friends, Plekhanov and Martov -- two other influencers of the Russian politics at the turn of the century. When the Social Democratic Party split in 1903, AMP (Axelrod, Martov, and Plekhanov) sided with the Mensheviks and in the first 15 years of the 20th century played a much more important role than Lenin did. AMP were the leading ideologists who called for Russian Marxists to abandon violent revolutionary activities and instead concentrate on labour organising and parliamentary work in the social democratic tradition of Western Europe.

This policy was in contrast to Lenin’s strategy of organising a highly centralised party led by professional revolutionaries. AMP had rightly predicted that if a Leninist party were to gain power in Russia, it would replace the despotism of the autocratic tsar (emperor) with its own form of despotism. In all, there were four Dumas from 1906 to 1917. The first lasted two months (May - July, 1906); the second Duma could survive three months (March - June, 1907) before being dissolved. The first two Dumas had large representations from the peasantry with strong liberal and socialist groups that demanded extensive reforms and, that’s why, were quickly dissolved by the tsar.

In addition to AMP, there was another major player, Pyotr Stolypin (1862-1911), the prime minister of Russia from 1906 to his assassination in 1911. In a 2008 TV-poll to select the greatest Russian, Stolypin was placed second; and in 2012 a monument to him was unveiled in Moscow near the Russian White House where the Russian Cabinet is situated. In 1907, Stolypin restricted the franchise to reduce the representation of radical and national minority groups ensuring that the third Duma had most conservative members. The third Duma supported the government’s agrarian reforms and military reorganisation, surviving its full five-year term till 2012.

In addition to Bolsheviks and Mensheviks, there were at least three more groups that were active before the revolution: Constitutional Democrats (Kadets), Octoberists, and Socialist Revolutionaries. Octoberists were a centrist party in Duma that believed in constitutional monarchy and supported most of Stolypin’s reforms. They formed the main faction in the third Duma. Kadets were a moderate liberal party that was more radical than the Octoberists and believed in a socially progressive manifesto for Russia. They were the largest faction in the first and second Dumas before being deprived of their majority by manipulation and repression.

Perhaps, the most violent were the Socialist Revolutionaries led by Victor Chernov (1873-1952). They formed the main socialist faction in Russia from 1900 to 1917, with a focus on redistributing land to the peasants and removing the tsar. Their main support came from the peasantry and they were against the Marxist focus on the industrial labour as opposed to the peasants. The fourth Duma was also mostly conservative but with the First World War starting in 1914, the Duma became increasingly dissatisfied and started opposing the imperial regime.

In the first three years of the war, the fourth Duma played an active role in trying to persuade the tsar to step down in the face of increasing defeats on the front and mounting pressure from the masses for the overthrow of the monarchy. In 1915, a Progressive Bloc was formed in the Duma that was a coalition of moderate conservatives and liberals who were trying to pressure the imperial government to adopt reforms to inspire public confidence. Its leader Milyukov commanded the support of about half of the Duma membership and throughout 1916 tried to negotiate a deal with the tsar.

In the long run, if a state wants to survive it needs to hear the voice of the people and should not rely on nationalistic, jingoistic, and religious slogans that ultimately do more harm to its own people rather than any real or purported enemy.

In 1915, the tsar took personal command of the army and moved from the capital to the army headquarters in Russian Poland. He hoped to inspire the army to fight with renewed vigour, but he had little knowledge of the ground realities of war. His humiliating defeats continued and he could blame nobody else but himself. The government in the capital was controlled by Tsarina Alexandra and her unorthodox monk from Siberia, Rasputin, who influenced the appointment of ministers that were weak and highly incompetent. Now the Russian people and soldiers knew where the responsibility lay and were ready to rebel openly.

Rasputin was murdered at the end of 1916. With increasing dissatisfaction, in February 1917 riots broke out in the capital, Petrograd whose name had been changed from St. Petersburg for its German origin. The garrisons mutinied, workers’ soviets were set up. Now the fourth Duma came into action and established a provisional government to restore order. Tsar Nicholas was forced to abdicate.

With a provisional government in place, without the tsar’s interference, the Duma attempted a moderate policy but was reluctant to announce an immediate end to the war. The Duma had successfully removed the tsar and could have saved itself by accepting the popular demand by ending the war.

But that’s where it failed and gave an upper hand to the soviets. The Petrograd Soviet of Workers and Soldiers was established and led by the Mensheviks and Socialist Revolutionaries, with a minor representation of the Bolsheviks. The Soviet began to function as a boy of revolutionary power of the workers and peasants who created armed militias to implement the orders to make Petrograd garrison politically subordinate to the Soviet. Interestingly, during the February Revolution the Petrograd Soviet was dominated by the Mensheviks and Socialist Revolutionaries, whereas the Duma had the Progressive Bloc.

How this balance of power shifted in favour of the Bolsheviks in the next six to eight month deserves a separate article. For now the most important lesson for a country such a Pakistan is that a war cry may galvanize people for a short while, but as the devastation of the war mongering becomes clear to the people they turn their guns against their own rulers and refuse to be duped by a nationalistic hysteria. If a state neglects the real issues of people it loses the confidence of people paving the way for a revolution.

In the long run, if a state wants to survive it needs to hear the voice of the people and should not rely on nationalistic, jingoistic, and religious slogans that ultimately do more harm to its own people rather than any real or purported enemy.

A look at the early 20th century Russia