Dancing at the darbar

At 3:30 in the morning the day after, a Friday, the nobat was beating again and the bells were being rung by the fakirs in tears. The grief has united so many strangers in love of those who were killed at the shrine 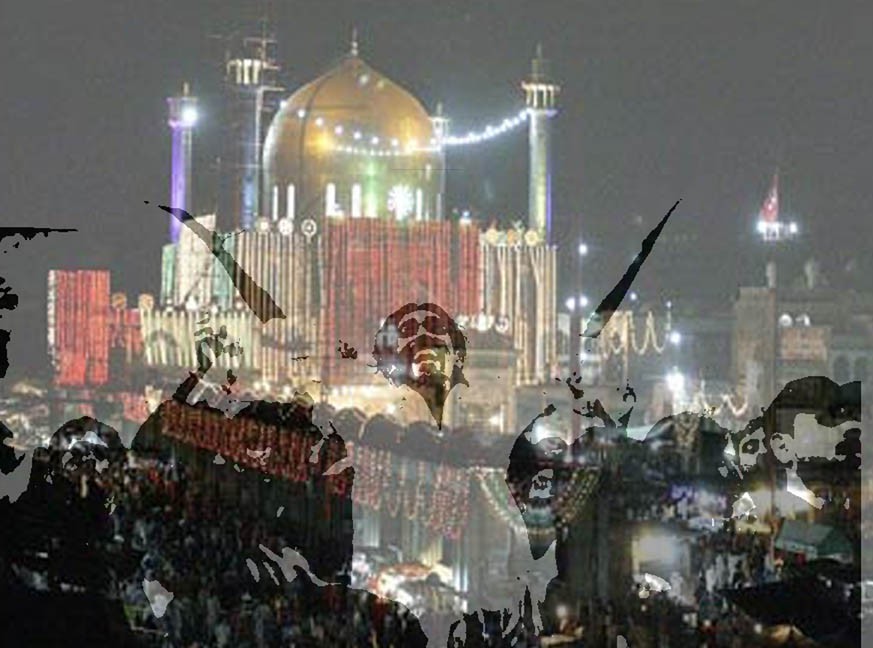 They had travelled to the desert shrine in a bus, a colourful yellow Mazda complete with a red flower headdress, an iron jhoomar grill for a smile, painted eyes for head lights and every small inch of its body filigreed in floral motifs. It was already packed when they got on with the luggage thrown into the air to be precariously perched on the roof by someone at the top. The vehicle slouched slightly to one side but everyone squeezed in somehow to share the aisle with children and with chickens, a couple of bleary-eyed goats and several young girls of a family squatting on the floor in ochre and fuchsia ghagras.

This was the slow bus to Sehwan Sharif from Hyderabad that huffed along and stopped for anyone who waved at it: children without fare, old women with bundles over the head and old men as thin as the sticks they carried for balance. The men, old and young, wore red scarves about the neck and women were dressed in children.

Despite the gaiety, no one spoke out loud or got into quarrels, even the children were hushed because they were all headed for the shrine of the silent dervish on a Thursday night, the night of healing and of shifa’a.

They seemed like wizened travellers who had made this journey several times over and sat contently in silence. There was no music on the decorated but dilapidated Mazda except for the drone of the engine labouring against the sand dunes and high wind, slapped by sandstorms that wiped away the road, creeping past the villages to climb the hills. The river was far away and everyone sat dusted in gold grains that flew in through the open windows. It was still winter.

Several fakirs walked alongside the bus in long strides but at a slow pace. Dressed in loose robes and prayer beads that signified their orders, there were among them some half-dressed in black who bore lean bodies of resilience and restraint, others wore green or red in infinite grace. Indistinguishable in age, they walked with averted eyes, saving their breath for the journey.

The bus did not stop to offer them a ride because walking was part of their meditation: they believed slowness was essential and the arduousness of the journey sweetened the arrival. There would be time enough. They were going to join the fakirs on a Thursday night in dhammal, a deep prayer to the dancing universe, uniting the beat of the heart to the rhythm of dusty stars turning, turning.

The fakirs have taught us the way, a response to bad times and to the closed, confused minds of militant men. So long as arrogance rules the world, there will always be the need for sacrifice.

When the bus finally arrived some six gruelling hours later, the first thing to greet them was the music. The winding streets of the bazaar played loud dhammal songs recorded by almost every major musician of the country who paid tribute to Qalandar Sain, or Hazrat Usman Marwandi, for their work to be blessed. As the shrine of the golden dome drew nearer, taped music died out and you could hear the sombre beat of the nobat, the large drums, answering to the plaintive shenai, emphasising the quarter tones, the silence between notes.

"All grief comes to the heart through speech", writes the Qalandar in Ghazal 70, and later in the same ghazal, "The sorrows of the world dissolve silently in each man".  He wished to silence the longing for the world because it was a useless burden for travellers who need to tread lightly. "Silence heals the weary heart", he writes, or else it becomes "a hive of bees". Perhaps that is why pilgrims who go to Sehwan Sharif harbouring secret desires come away satisfied because they are silenced, a most heady experience for which they return each year.

Sehwan can be addictive and there is no cogent reason anyone can give for it.

But no one reads Qalandar Sain as a mystic poet of Persian origin of the twelfth century who learnt from many masters and was a contemporary of Maulana Jalauddin Rum. Little is known about him except for hagiographic accounts of a man of knowledge and piety who taught others and at least one of his books survives as text in a Turkish syllabus. He is a popular figure now, beyond history, a man known for his temper against the powerful and the unjust.

Like Maulana Rum, he did not identify as a Sufi of any order or hierarchy rife with the politics of the time but wandered in search of enlightenment from what is now Afghanistan, through Azerbaijan that was once Persia, to spend his final years in Sindh which was then part of India. Yet no one reads him through registers of nationality or creed or even in historical time that seems to stop at the shrine.

In the courtyard of Lal Shahbaz Qalandar, Haroon Khalid writes in the Scroll.in "it feels as if the riots of Partition never happened, as if Sindhi Hindus were never forced to abandon their land, as if Christian settlements in Punjab had never been burned after alleged cases of blasphemy".

Present under the golden dome are the khusra or trans people, among others who are considered outsiders -- the criminal and the insane. But if you look hard at anyone they shame you by coming over to say salaam and exchange a courtesy, for that is the tehzib of the shrine.

On the bus they had met an ageing prostitute, now a devoted singer, who had been coming each year for the past thirty years because she said this was where she ran away from the world to peace. This was her darsgah, she had said, where she felt most loved and "reformed", where she was not looked down upon.

Historically, too, shrines have always been the refuge of the broken and the maimed in spirit and in body, home to the poorest of the poor. Just look at the women who walk proud here, dance proud too.

But it is hard to look at the women in dhammal who keep to one side, their minders at pains to maintain norms of modesty. Still they dance, frenetically, manically, visibly in sharper despair than the men, swinging their hair from side to side as though in a refusal of being trapped in the body. In this, women are closer to malamati azadari and not in some easy ecstasy.

I dance to meet my beloved in the streets and in the bazaar
I dance and sing to humble myself.
Do not threaten me with hellfire
for I will dance there too
in ecstasy before the beloved
I dance to the secrets of nature unfolding
I dance on the thorns yet
it is not I who dances.

It was a Thursday such as this when a young man destroyed himself in the shrine. It is reported that the explosion did not damage the walls or even the floors but ripped through human bodies in haal, in a state of ishq, a fakir chanting ‘Ya Hussain’ clearly audible in the recordings just before the violent flash of light. They say that the young man came from some Wahabi madrassa -- several of which now surround Sehwan Sharif -- where love is not taught as the creed of Hazrat Mohammed Mustafa and Karbala is not the story of lovers. Qalandar Sain writes:

It is grief that has united so many strangers in love of those who were killed at the shrine. At 3:30 in the morning the day after, a Friday, the nobat was beating again and the bells were being rung by the fakirs in tears.

The fakirs have taught us the way, a response to bad times and to the closed, confused minds of militant men. So long as arrogance rules the world, there will always be the need for sacrifice to test lovers, even as winter changes into spring and the earth dances closer and closer to the sun, the light lengthens to ripen the mangoes, and children are born to test the wisdom of the world again.

Dancing at the darbar 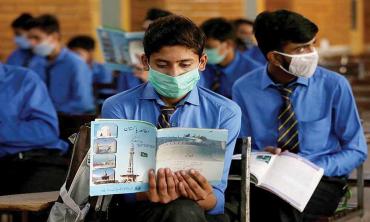 Education in times of pandemic 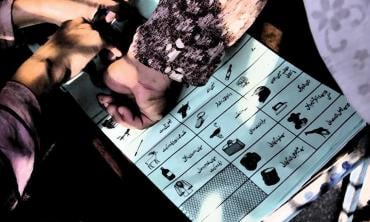 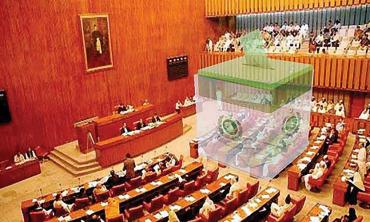