The kite’s the limit

The joys of flying kites were immense 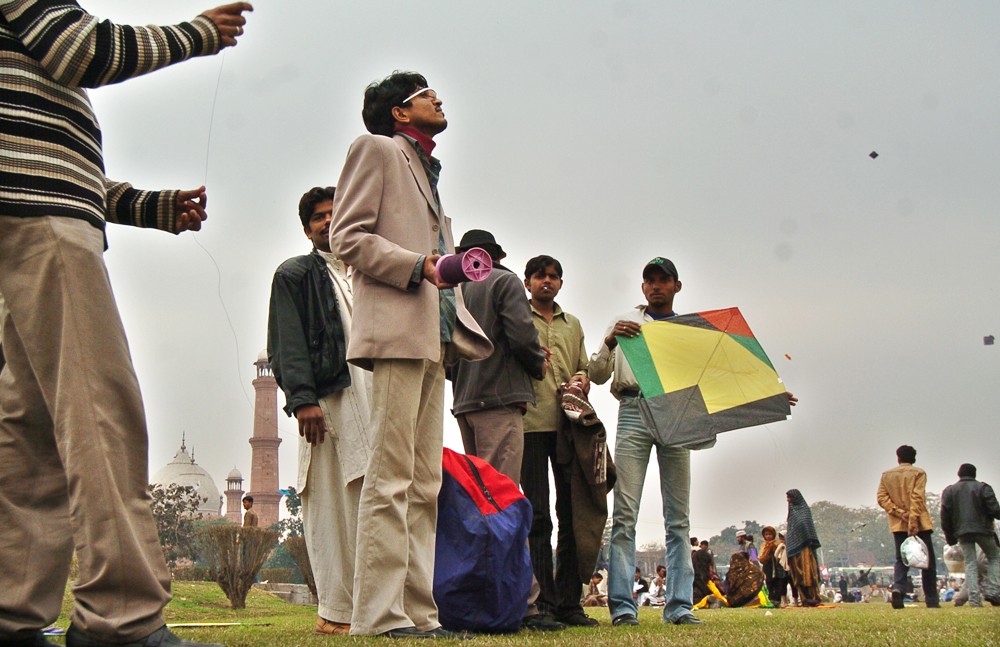 A kite slowly makes its way down to the ground, lilting from side to side. The descent is measured yet teasing, like a droplet of paint slowly meandering its way down a canvas. And what a canvas this kite is exiting -- a sky dotted with colour, filled at once with war and celebration.

Three boys run in a street in which the smell of an ancient rot lingers, eyes glued to the sky -- waiting, anticipating, calculating. Just as the fallen kite is within reach they turn a corner to find another group of boys, quite like them. Each of them pauses to make one final calculation, checking the wind to see how much the kite will sway in its final throe. They run towards it and each other. Some will fall, others will push, but only one will come out a victor. The spoils of war in this case are not divisible.

This was a regular sight in Lahore during the warm spring, not too long ago. And if it were a basant day, then around these boys on every rooftop would be gatherings of friends and families dressed in yellow looking to the sky.

Though I am old enough to remember those days, I have the distinct misfortune of having been too young at the time to have fully revelled in those joys. I was the age where I was made to hold the spools of string while older cousins navigated the choppy winds on the wings of a paper kite. The closest I got to the kite was during the kanni -- tossing up the kite to give it its first flight.

After the initial jerking and tugging at the string, the kite would catch the wind, almost as if by mistake, and be on its way. For the first minute, you could hear it spurring, the wind crashing against it. But this was short-lived, for soon the sound of chatter and music would drown it out.

With the kite up and away I used to turn to my immediate surroundings. I still had to hold the spool diligently, and at an angle that optimized the unfurling of the string, but I could allow my gaze to divorce the sky and return to the earth.

Who knows when basant will be back, and one hopes dearly that it is safe when that happens. But beyond the joy and the festivities, there was something quite extraordinary about that day. Everyone, from pauper to prince, looked to the sky.

In a corner would be gathered older men, or uncles if you will. They would stand there with fingers taped to protect against the bite of the razor-sharp strings. Managing a kite in the one hand and a cigar in the other, loud guffaws of laughter would emanate from that end.

I was young, but not that young, so soon enough my eyes would turn to the women. The yellow in the dress would bring out the red in the lips. There would be sun-glasses and shades abound, but for once they served a purpose beyond vanity and fashion.

Then there was the teenage son of whoever was hosting, who had to manage the playlist. I always pitied the fellow, because this was before the time of iPods and mp3 players. The poor chap would sit surrounded by CDs of Abrarul Haq and Hadiqa Kiani. If basant ever does come back, say a prayer for that wretched soul!

After lunch, everyone would forget about the kites and play a game of Pithu Gol Garam, a traditional South-Asian game where the aim of both teams is to break a small tower of seven stones with a tennis ball and then rebuild it without getting hit by the ball in the process by the opposing team. I don’t think I’ve ever played that game to its end, because it was always stopped short courtesy of a black eye or two.

Read also: "If we sell basant properly, it has the potential to grow into a multi-billion dollar industry"

Everyone would slowly shuffle out afterwards as the afternoon merged with the evening. But after the sun settled, the night came to life.

Though there must have been as many ‘basant night’ parties, as there were kites in the sky, the Punjab Club in Lahore was known to host one of the best. Basant, being a Lahori affair, meant that this party covered all age groups, from wide-eyed children to the young-hearted elderly.

The backdrop would be a warm night with white kites adorning the sky. B-list celebrities could be seen flitting about in leather jackets, enjoying the quiet recognition they would receive from the staff at hand. And the night would be rendered complete only after the DJ played the song, ‘Summer jam’ for the nth time. Each time to the same raucous approval from the dance floor (something about that song just resonates with the Lahoris).

The basant night I rue the most, because I was certainly too young for that last bit of the festivities.

Who knows when basant will be back, and one hopes dearly that it is safe when that happens. But beyond the joy and the festivities, there was something quite extraordinary about that day. Everyone, from pauper to prince, looked to the sky. There isn’t a better metaphor for optimism and hope than that.

The kite’s the limit