Could Basant be far behind?!

Come February, and the noise around Lahore’s favourite festival being revived grows, only to die, while those whose livelihoods were hugely compromised remain unheard 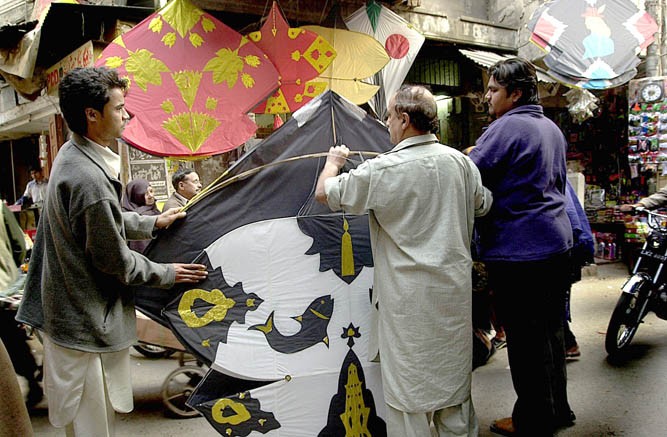 Chief Minister Punjab Shahbaz Sharif’s February 7 tweet -- "Complete BAN on Basant.. No one can b allowed to play with the lives of ppl.. concerned DPO will b responsible for any violation of ban" -- may have secured over 800 retweets and about three thousand ‘Likes’ at the time of writing this story, the fact remains that the Lahoris aren’t feeling glad about it.

Just when it looked like some sense might eventually prevail upon the authorities and they would realise that it wasn’t the sport of kite-flying that was the killer, it’s largely the type of string used in it, we were proved wrong yet again. The calm wind and a clear sky, after the last spell of winter rains, were largely responsible for re-kindling our passion and hope (against hope?), as we waited for the committee to see reason. But, no safe Basant. Oh, wait, no Basant this year, too!

A chat about the ban with people in streets or a random glance on related social media posts shows that the keen kite-flyers are not happy with the government’s fresh announcement upholding the ban. Come to think of it, a lot of these people are also associated with the business of making and selling kites.

"Khalid bhai," as he is called by his friends, is easily the most perturbed on the current situation. An old man, approaching 70, he sits on a cushion, his legs crossed, behind a small stall of candies and cookies, in the famous Guddi Bazaar of Mochi Gate area. There is a register lying next to him, its pages have turned yellow and brittle over time. This was where Khalid would keep record of the number of kites he sold and the deals he inked with kite-sellers from different parts of the country, before the ban was first imposed in 2005.

"I spent half of my life selling kites," he says, bemoaningly. "This would earn me my bread and butter. Today, I am penniless."

He remembers that his average day’s sales was Rs100,000. "But now I can barely make Rs4,000 in a day." He also reveals that things recently came to a point where he had to sell his own house and move to a much smaller, rented place.

"A ban is no solution… We must learn from what the other countries are doing about it, and regulate kite-flying instead. The metal string being the cause of the deaths is a lame argument given by the government. The real issue is something else."

Khalid’s story may at first seem that of an individual and his struggle but it also helps to understand the crisis the kite industry is in these days. There are about hundred shopkeepers in Guddi Bazaar alone who suddenly found themselves out of work. Their stories of how they have survived might give the government some reason to rethink their policy.

Naeem Abbas, from Thokar Niaz Baig, was in the business of kite-making before 2005, and doing very well for himself and his family, had no option but to sell ice blocks in summers and tea in winters.

Talking to TNS, Abbas says, "My whole family was in the business, including my mother and my wife. Each of us would make at least Rs1,500 a day. We used to sell kites to shopkeepers; the profit we made was enough for all of us."

For a clearer picture, a correct headcount of the workers rendered unemployed as a result of the ban can be useful. A rough estimate, according to people in the kite industry, puts the number of workers at around three million in the Punjab, with at least a million in Lahore alone. More than half of them are said to be women.

People like Khalid bhai and Naeem Abbas will obviously oppose the ban on Basant because they have commercial interests in the business. But there are those who criticise it on cultural grounds, and hold the government responsible for contributing to aesthetic impoverishment. They attribute the ban to the government’s poor sense of history also. Yusuf Salahuddin, an art aficionado and patron of local cultural activities, terms the ban as non-Pakistani in spirit.

"I am part of the committee formed to consider the revival of the Basant festival," Salahuddin informs TNS. "We’ve held a series of discussions but nothing came out of it."

He believes that apart from its importance as a festival to mark the beginning of the spring every year, Basant has great potential to attract tourists from across the world. "By banning such festivities we are only making our people dull," he asserts. "Let the people be proud of their culture and celebrate!"

Salahuddin laments the fact that an important cottage industry is being destroyed in Lahore and other cities including Faisalabad, Gujranwala, Sialkot, and Kasur.

Khalid Malik, General Secretary, Kite Flying Association, suggests that the government should launch awareness campaigns and promote safety measures instead of banning the sport altogether. "Why we are not allowing a large number of people an opportunity to play when the same festival is being regularly held in many other countries including India?" he asks.

"There are more dangerous games in the world such as bullfight and motorcycle and car rallies, but people still play and enjoy them. Some people get injured and, in some cases, lose their lives but does that stop others from playing these games?

"A ban is no solution," he insists. "We must learn from what the other countries are doing about it, and regulate kite-flying instead. The metal string being the cause of the deaths is a lame argument given by the government. The real issue is something else."

Could Basant be far behind?!