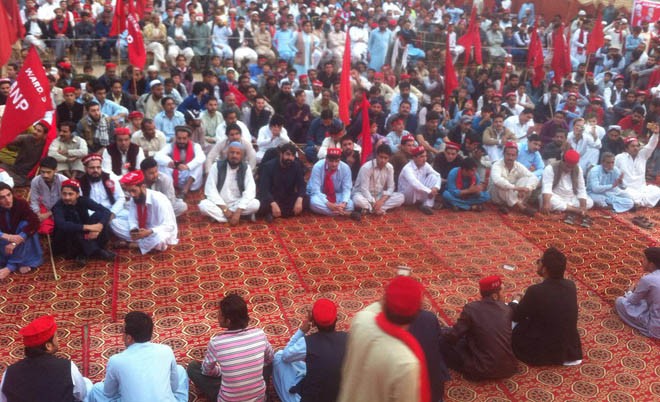 On December 5, 2010, Daud Khan, a member of Awami National Party (ANP) Central and Provincial Council, was attacked near Abul Hasan Isfahani Road in Karachi. He survived but his 17 year old youngest brother, Irfanullah, was killed. One bullet that pierced into Khan’s body damaged his spinal cord permanently. Since then, Daud Khan is bed-ridden.

With many more examples like him, ANP was barred from campaigning during the 2013 general elections. Other parties that weren’t allowed to campaign were Muttahida Qaumi Movement (MQM) and Pakistan People’s Party (PPP). Threatening pamphlets from the outlawed Tehreek-e-Taliban Pakistan (TTP) were distributed in the Pashtun-dominated areas of the metropolis.

The central leaders of ANP, like former provincial minister of Khyber Pakhtunkhwa (KP), Bashir Bilour was killed in a suicide attack in 2012. Earlier, in 2010, the only son of Iftikhar Hussain, then information minister KP, was shot dead. The head of the organisation, Asfandyar Wali Khan was also attacked at his residence in Charsadda.

According to ANP Sindh statistics, 70 workers and office-bearers of the party were killed in Karachi. Moreover, party activists were forced to vacate their areas.

Analysts believe it was the backlash of Operation Rah-e-Raast that started in Swat during May 2009. Simultaneously, Operation Rah-e-Nijat was also launched in South Waziristan Agency of FATA. Militants who fled from these areas took refuge in different parts of the country, especially in the suburbs of Karachi.

According to a map shown in one of the presentations of Sindh Police’s Special Branch in early 2014 there were at least 71 areas in the metropolis where extremist elements or their sympathisers were present. Kunwari Colony, an area of District West, was prominent among them. Other strong pockets were located in Sultanabad, Ittehad Town, Islamia Colony, MPR Colony, Pirabad, Metrovel SITE, Tori Bangash Colony, Frontier Colony, MPR Colony, Faqir Colony, Pakhtunabad, Al-Asif Square, Afghan Basti, Future Colony, Muzaffarabad Colony, Gulshan-e-Buner etc.

After the Karachi Operation the scenario has changed and the ANP is back in its strongholds, resuming political activity after more than six years.

From 2007-2016, the ANP was not allowed to carry out any political activity in these two and other adjoining areas. All the offices were shut down in the adjoining areas of Sohrab Goth.

In the first phase, the TTP put a ban on ANP; later, it turned its cannons towards the ANP members. Those who continued their political activity and resisted were called to the offices of the banned outfit and were threatened with dire consequences. Some were also asked to pay protection money.

However, after the Karachi Operation the scenario has changed and the ANP is back in its strongholds, resuming political activity after more than six years. Workers are holding conventions. Since December 25 last year, the ANP has shown its political force in three different areas like Lee Market, SITE and Landhi, attended by head of the Sindh chapter Senator Shahi Syed.

During a visit to Kanwari Colony, the party’s vice president district West told TNS: "It was a stronghold of Taliban where no outsider was allowed to enter, it was a no-go-area where throats were slit, verdicts were announced and people were given punishments."

Those opposed to the TTP fled from the area along with their families. An old worker of ANP, Ajmal Khan says, "It was a hard time. I left Kunwari Colony and took shelter in interior Sindh and then Punjab. Now I am back."

Several partymen were killed in Sohrab Goth area of East Zone. One of the party presidents was killed outside the ward office and about a dozen party offices in the vicinity were attacked or shut down. In a visit to Sohrab Goth, ANP flags and graffiti in the party’s favour were witnessed. Picking up political momentum, the local office-bearers are organising workers’ convention and corner meetings.

Explaining what happened in the past, provincial cultural secretary Sindh, Norullah Achakzai says: "There was law of jungle. Armed men used to patrol in jeeps. Their system of gathering information was very effective; they would call with 6 digit number and start telling us who we met, where we went -- in short, they would warn us we were being watched."

Another leader of ANP, Alamzeb Alai, has survived four assassination attempts. While campaigning for general elections, he escaped unhurt along with former general secretary ANP Sindh, Bashir Jan, in a bomb attack during April 2013.

"I received phone calls from Waziristan and then five six men came to me and said they had direct orders from the TTP Chief Hakimullah Mehsud to kill me but due to my tribal background they didn’t want to target me directly; instead they asked me to remove the flag from the building of Al-Asif Square," recalls Sher Khan Akakhel, senior vice president, district East.

"We were asked to join Pakistan Tehreek-e-Insaaf (PTI) and other political parties but were restricted to work from the platform of ANP," Achakazai went on to say.

They established Sharia Courts in the area where they announced verdicts and distributed copies of those verdicts. The blue-eyed ones were saved from their wrath but others faced the music. Abdul Wasay Tareen, deputy general secretary ANP East, recalled his torment: "In 2012, they called me thrice but I ignored. One day in a broad day light, 15-20 armed men riding on motorcycles arrived at my apartment building. I was called by the local commander of TTP in a locality of Machhar Colony where I was threatened to remove all flags from the building which I did. The very next day, flags of banned sectarian outfits were hoisted all over the square."

During the 2013 general elections, at least two offices of ANP in District Malir were bombed where several people were killed including the party workers. But, in recent local bodies election, the party took part and won several seats. ANP District Malir President, Saeed Khan, contested election for provincial seat from same place but he was not allowed to carry out his campaign. "Other parties had no threat and they campaigned with complete freedom. Today you and I are moving freely in Gulshan-e-Buner but till a few months back, we could not imagine this," he said.

Another leader of ANP, Alamzeb Alai, has survived four assassination attempts. While campaigning for general elections, he escaped unhurt along with former general secretary ANP Sindh, Bashir Jan, in a bomb attack during April 2013 at Mominabad, Orangi Town. At least 13 people lost their lives in the assault. Alamzeb Alai has recently been elected as Union Council Chairman. He is also the ANP parliamentary leader in City Council of City District Government.

Moreover, the party is flexing its muscles for a mega political show in the near future where central leadership is likely to participate. "We are preparing for a massive political gathering on March 26," says Shahi Syed. According to Syed, there are at least five million Pashtuns living in the city and that is why ANP is "focusing on delimitations of constituencies".

Contacting and strengthening the party setup at the grassroots level, the ANP is determined to eradicate extremist elements from these areas.