The sounds of Iran

Celebrating the anniversary of the Iranian Revolution, a group of Iranian classical musicians, Kook Band, held a number of concerts in Pakistan last week 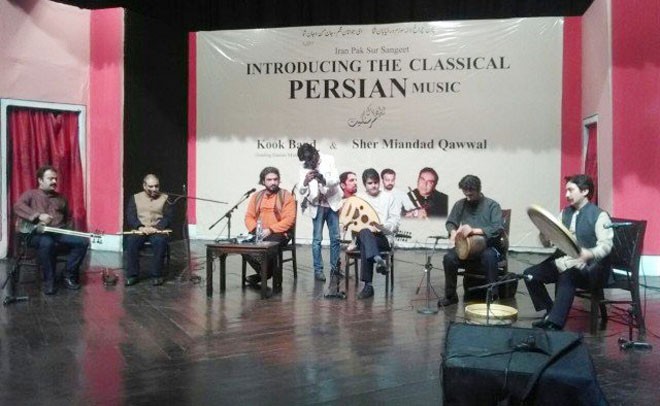 Over the years, the cultural interaction between the Iranians and Pakistanis have not been on the level that it should have been -- for Iran and Pakistan have so much in common, particularly in fields of painting, literature and music. It almost builds up to being a case of shared heritage.

Some exchanges do take place on the state level, particularly on the anniversary of the Iranian Revolution -- as did the one by the group of classical musicians, Kook Band, which held a number of concerts in Pakistan last week.

It appears that since the revolution the classical forms have made some kind of resurgence. It must be noted that music or musicology (elm e musighy) as a branch of mathematics was always held in high esteem in Iran as opposed to the music performance which has had an uneasy and often acrimonious relationship with religious authorities.

Syed Ali Saifi is the leader of this group. He took music lessons from the renowned ustads like Muhammed Raza Lutfi, Hussain Aleez Ada, Mohsin Nafar and Masood Sha’aari. He specialises in playing the taar and sehtaar. He has also been composing music for theatre in Iran. Zaman Khairi is a bansuri player and besides playing and holding concerts has been teaching music. His ustads have been Darush Talai, Masood Sha’aari, Hameed Raza Noor Buksh and Mohsin Nafar. Saeed Jalalean has been trained in music by Daarush Zargari and Ustad Bahimian.

Over the years, the cultural interaction between the Iranians and Pakistanis have not been on the level that it should have been -- for Iran and Pakistan have so much in common, particularly in fields of painting, literature and music. It almost builds up to being a case of shared heritage.

One does not know much about the development of music in Iran in the past three decades, its role in society and the institutions that have been set up for training and propagation. But, it appears from the information provided that there are institutions that impart training to musicians. All members of the group have been to institutions, and been shagirds of common ustads or ustads that they share, which implies that they have been trained in institutions or groups, and not individually on one-to-one basis -- as has been the wont in our tradition. And that has been the real success model of music pedagogy.

It also appears from the same source that they travel a lot, displaying their talent abroad, mostly in Central Asian and European regions.

In Europe, usually the training of music rests with the conservatories that offer courses over a 10-year period. These are basically institutions that transfer the skill of playing an instrument or singing, and prefer to enroll students at a very young age.

In the United States, however, the universities offer undergraduate or post-graduate courses in established universities where even the craft of playing or singing is transferred.

In our system, the transference has been more personalised, on one-to-one basis.

It seems the current Iranian system is a combination of the European and American models of music impartation. Iranian music is melodic and monophonic with 12 basic modes, dastgah, and five secondary ones, awaz. These 12 modes are probably only a reminder of the ancient 12 maghams (maqams) that formed the primary classification of the musical system of ancient and medieval Iran.

The standard melodic patterns of Iranian classical music are codified in something called the radif. It consists of a large body of melodies or sequences called gushes grouped by a mode. To form a suite, the artist selects appropriate gushes along with classical poetry, improvised elements or original compositions. Some gushes and compositions have specific rhythms while others do not. There are different versions of the radif that different artists will use, especially for different instruments.

The musical instruments that are used in Iranian music too are quite familiar at least in name if not in form and sound because they are often mentioned in our classical poetry. Ud, ney, tanbur, santur, daf, tombak, tar, dotar, sehtar and kamancheh are some of the instruments commonly used even today by the musicians who play Iranian music.

According to some musicologists, the division of our saptak or the octave into seven pure and five altered notes is either derived from the Iranian scale or was shared with them in the medieval period of our histories. It preceded similar division which was also shared by western musical system introduced into India by the church musicians best exemplified by the organ and its mini version, harmonium.

It was designed as a concert of fusion music with Sher Miandad also performing his traditional qawwali numbers. Though the organisers whose names had been mentioned in the brochure included the Khana Farhang-e-Iran, Walled City Authority Lahore and Alhamra, it was not properly conceived and even more badly executed. All sorts of unrelated people were jumping on to the stage as promoters of the cause of music or casually walking across if they did not find a way from backstage to where the audience sat.

This was besides the constant stream of people that casually walk in and walk out during concerts in the land of the pure.

Private sector can help in fostering cultural linkages between Pakistan and Iran. The states can facilitate but some verve will be added once it is done by the private sector on a people-to-people basis in arranging film festivals, curating exhibition of miniature paintings and holding of musical performances.

The sounds of Iran