The disaster that took away lives, power and flame 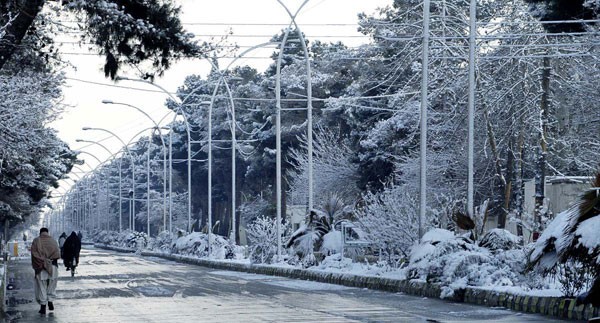 On January 14, Quetta and the nearby districts experienced the first major snowfall and rainfall of the season. The snowfall was intense and nothing like that has taken place in the last 15 years in Quetta.

There was hardly any male social media user from Quetta who did not post his pictures playing with snow. It was very pleasant and people enjoyed a lot. However, the damage this spell of snow and rain caused and the response from the government apparatus is not much known.

This spell which started on January 14 continued for over a week and still another low-intensity spell is expected. Two-day snowfall and seven-day rainfall wreaked havoc in Quetta city and nearby areas. All flights from Quetta were cancelled during the days of rainfall. Highways connecting Quetta with different cities were blocked for almost two days. Snow blocked all sort of traffic near Lakpass Tunnel, Kolpur, Kan Mehtarzai on the main highways. Although the district administration moved swiftly to clear the roads and did a good job, there was no mechanism or preparedness to prevent road blockages in the first place.

Apart from that, small settlements in Mastung, Harnai and Killa Saifullah districts were disconnected from major cities for almost a week. People in these populated settlements ran out of food and water. They made desperate phone calls to people in Quetta and that forced the government to act. Materials of basic survival were airdropped from helicopters in those areas to save the lives of marooned people.

Moreover, Quetta being the only metropolitan city of the province, has a very high population. People from different parts of the province have migrated to Quetta in the hope of a better life. However, after rain and snow the condition of Quetta remained no more satisfactory. Immediately after snowfall, electricity and gas supply was suspended to many areas of the city.

Muhammad Bakhsh, 43, is a resident of Kechi Beg area in the suburbs of Quetta. He lamented that there was a continuous electricity breakdown in his area for 70 hours. "Even our mobile phones ran out of charge and life was totally paralysed for us. We didn’t know what was going on," he told TNS.

All flights from Quetta were cancelled during the days of rainfall. Highways connecting Quetta with different cities were blocked for almost two days. Snow blocked all sort of traffic near Lakpass Tunnel, Kolpur, Kan Mehtarzai on the main highways.

Luckily, Bakhsh still had gas supply in his area and his household didn’t have any problem cooking food and heating the rooms. However, residents in other areas of Quetta were not as lucky as they faced breakdown of both gas and electricity supply.

Khuda-e-Rahim, 27, lives near Balochi Street in the city centre. He said, "Gas supply in our locality was suspended after first day of snowfall." There was no gas supply in their area for almost a week. "We shifted to our uncle’s home for 5 days in Hudda area of Quetta where there was low pressure gas supply," he added.

What happened with Muhammad Bakhsh and Khuda-e-Rahim are not one off stories but majority of people in Quetta faced such ordeals in the aftermath of snow and rainfall. Only Quetta Cantonment and Red Zone, where Chief Minister and Governor’s House are located, received non-stop gas and electricity supply.

Provincial Disaster Management Authority (PDMA) is supposed to take a leading role during disaster. Established in year 2007, PDMA is responsible for devising disaster management policy and ensuring coordination between different government departments in case of any disaster. However, there is still no proper disaster management policy in Balochistan and even a World Bank funded project for this purpose could not prove to be fruitful in preparing a robust policy.

Aslam Tareen, Director General (DG) of PDMA, conceded that there are some constraints and resource limitations under which PDMA is working. He told TNS that in total 19 people lost their lives and 18 sustained injuries all over Balochistan due to this spell of rain and snowfall. "Majority of the deaths took place when cars were drowned in flood streams on connecting roads," Tareen revealed.

"We had given many warnings to people to avoid movement on roads during first few days of rainfall but some people didn’t listen and lost their lives," he said, adding, "the process of determining the loss of property is still in progress and once it’s completed the government of Balochistan will provide compensation to affected people as per government rules."

When asked about the relief operations carried out by PDMA, Tareen said that 258 trucks were moved to supply relief items to 4 divisions of Balochistan. "We also carried out 15 operations in which we dropped food packets in villages from helicopters where roads were fully blocked," he said. "We did whatever we could and provided relief in our capacity," the DG said.

However, a well-placed source inside the government of Balochistan told this scribe on condition of anonymity that there is poor coordination among different government departments that delays disaster relief operations. "Highways were blocked due to snowfall and bulldozers were required to clear the snow. Irrigation Department has 1,600 bulldozers all over the province and not a single one was spared for disaster relief operations," the source revealed. He further said that majority of the government departments lack basic orientation of disaster response and that’s why they don’t realise their responsibilities in case of disaster which further worsens the problem.

Mir Sarfraz Bugti, Balochistan Minister for Home and Tribal Affairs also has the portfolio of Minister for PDMA. He told TNS that although there were problems of coordination and resource limitation, still PDMA did its best in the given circumstances. "This was the first time in history of Balochistan where the state was seen reacting swiftly to help people and everyone endorses it," claimed Bugti.

It’s hard to disagree with the claim of Minister PDMA. However, the government still needs to do more to equip PDMA and improve coordination among government departments. This will help minimise the losses in case of any future disaster in Balochistan.

The disaster that took away lives, power and flame