Women march in London for equal rights and an end to discrimination on the basis of gender, religion or race 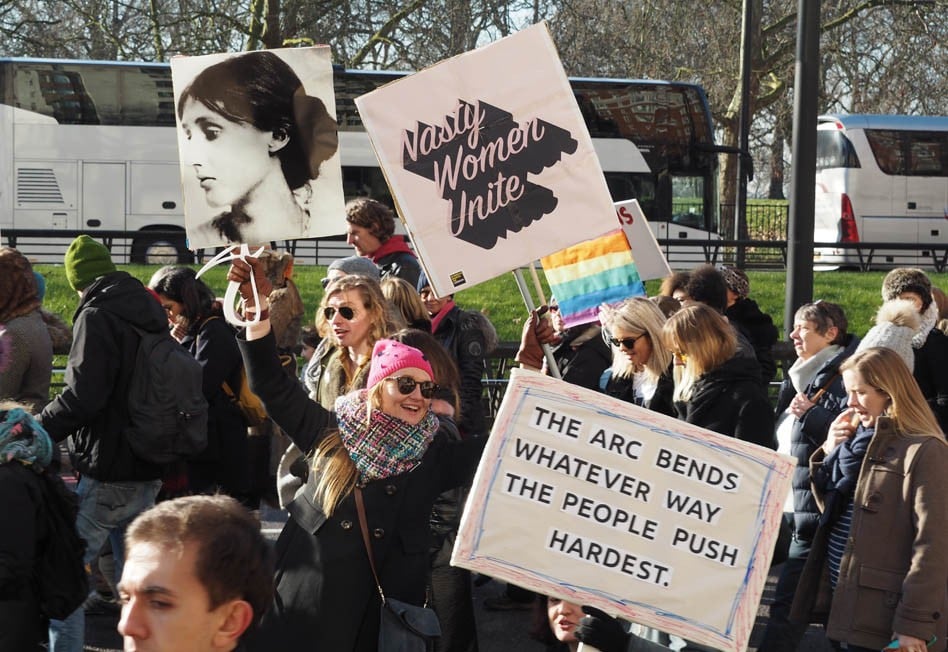 I shivered as I made my way towards Grosvenor Square in London, pushing through the crowd of men and women gathered in front of the US embassy for the women’s march early Saturday morning. The square was packed with protestors; banners and signs bobbing darkly against the bright, electric blue sky. I bumped into an older woman dressed as "The statue of taking liberties," and smiled at a banner that read, "Melania blink for help". In the distance, a man waved a bright yellow placard that summed the feeling of everyone there by saying, "Ugh".

I had struggled with my own banner that morning, finally settling on "Nasty women unite," on one side and "Speak or someone else will speak for you" on the other. We did not have a stick to hold the cardboard up, so my husband suggested that we use our broomstick -- the irony was not lost on me. On my backpack I had a photo of Princess Leia with the slogan "A woman’s place is in the resistance". Because, well … Princess Leia!

The large bronze American eagle looked down from its perch atop the embassy building at a laughing, cheering crowd that consisted of men and women of every colour, race, sexual and religious orientation, political affiliations and disabilities. The atmosphere was electric as people sang and danced, marching to the tune of drums and black cabs honking in support. Women wearing headscarves walked next to women in suffragette costumes singing songs of emancipation. Young women and men carried signs supporting feminism, immigration and equality for all. My heart went out to the hundreds of families with children shouting slogans and stopping every now and then to change diapers on the pavement.

"This is what hope feels like," I thought, smiling at the placard someone had placed on one of the lions in Trafalgar square. "I am woman, hear me roar", it said. And when the traffic light at the square turned green it showed the symbol of womanhood -- Venus. As symbolism goes, it was perfect.

So I marched because I could in this democratic country. I marched for those that could not. I marched for the sake of my body and the bodies of my fellow women, historically violated, abused and used. I marched for my two sons, so that they could see and know the difference between right and wrong.

The organisers had expected 20,000 people but about 100,000 showed up, bringing central London to a standstill. It seemed as if the spirit of the 1970s was still alive for there was an almost palpable feeling of optimism in the idea that change happens when ordinary people take to the streets demanding their rights. The worldwide support for the women’s march was extraordinary and unprecedented. But unless that support is harnessed, it will become another ineffective Occupy Wall Street movement.

Organisers are trying to harness all that energy towards political action, to build a base, a platform to launch a movement of hope, whether it is calling a local representative, sending an email to the prime minister or joining the newly formed Women’s Equality Party. If nothing else, they want to use this political action to get people who are otherwise non-political to start thinking about the big and troublesome questions. Every small drop counts.

I, like thousands of others that day, marched because I am tired of listening to lies perpetuated as truth, tired of inequality, tired of the closet racists, sexist and homophobes that have been crawling out of the woodworks. For months I have been feeling an itch under my skin to do something, anything because I cannot get rid of this one question: What kind of world are we leaving for our children?

So I marched. I marched because I could in this democratic country. I marched for those that could not. I marched for the sake of my body and the bodies of my fellow women, historically violated, abused and used. I marched for the people discriminated against because of the colour of their skin or their religion. I marched for my two sons, so that they could see and know the difference between right and wrong, so that they can grow up to be the kind of men who stand against sexism and misogyny because men are needed as equal partners in this fight for human rights. I marched because I wanted them to know that human dignity is inviolable, that despite the example of the most powerful man in the world, it is not alright to lie and cheat, to be racist and to belittle people because of their gender, religion or disability.

And yes, it is a drop in the ocean and yes it will not solve the problems of women in places like Saudi Arabia and Pakistan but it is a step. And sometimes all that is needed is one small step. As Dr Martin Luther King said, "We cannot walk alone. And as we walk, we must make the pledge that we shall always march ahead. We cannot turn back."

And here is a story. I want to leave you with that which encapsulates the essence of the march. As I was walking, an older woman started chatting with me. "Twenty years ago when I started working I found that women were paid less than men and starting asking questions," she told me. "One day the head of finance, a nice, ordinary man, a father, came up behind me and hit me and pushed me against the wall. He said, ‘I know you are stirring trouble. Stop."

"He’s dead now and I’m still marching." She paused, pointed to my sign and said with a glint in her eyes, "We are all nasty women."