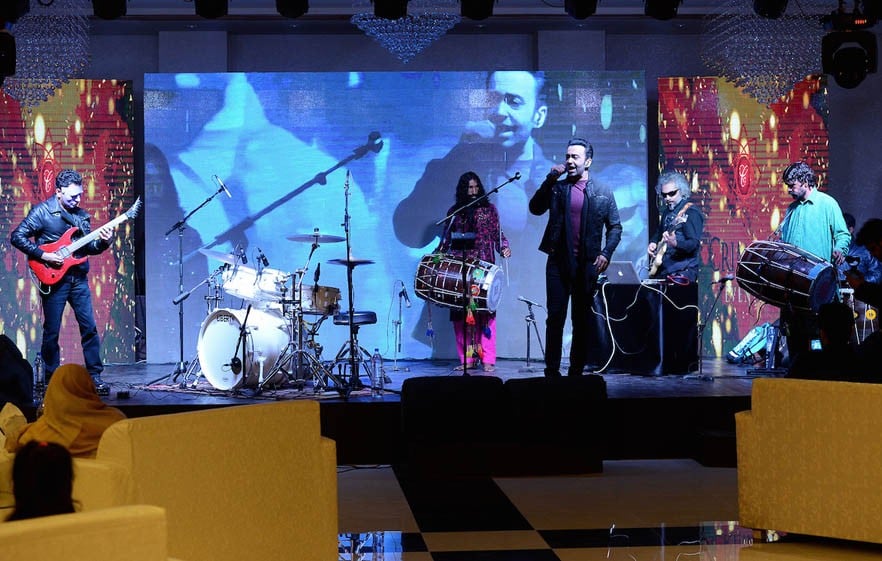 There are music concerts and there are standup comedic acts -- both are known to have their loyal fan base, especially among the youth. In Lahore, particularly, we have seen bands perform at shows where we wouldn’t traditionally expect them to; for instance, we saw the fast rising Bayaan in full musical action at a popular housing website event in DHA last year. What happens, therefore, is not a flattering audience response. The launch of Crimson Complex, in Garden Town, recently, then was a rare event.

The building launch saw not just a musical act by Overload’s Farhad Humayoun -- he is decidedly one of the best Live acts on the local scene -- but also, well, well, standup comedian Shehzad Ghias Shaikh entertain the guests.

Today, it’s not possible to have an event and not roll out your red carpet. The launch event too followed the norm, host Sophia Anjum greeting the guests that included media personnel.

Soon after, the stage was set for Shehzad Ghias. This Karachi-based theatre actor-director turned standup has already become popular in Lahore where he studied at LUMS, and also began his artistic journey. His comedy troupe, catchily titled, ‘Room for Improv-ment’, has had packed shows in the US also. More recently, his posts on social media have increased his popularity among the youth.

Broadly, Ghias’s humour falls in the category of slapstick, but it is intelligent humour nonetheless. At the launch event, his jokes evoked hearty laughs from the audience, whether these were about "desi weddings," the "Karachiwalas," or about his crushes. Perhaps, the funniest, and most relatable, moment of the night happened when Ghias elaborated on Pakistani mothers’ typical jargon. Next, his vivid description of what goes in the head of a "guy" when he see a "pretty gal" driving an expensive car and his own poor "Mehran" breaks down in the middle of a heavy traffic, had the crowd in splits.

Some of his puns didn’t quite cut it, but overall he contributed to enlivening the environment of an event that could otherwise have been -- well, just another launch.

Ghias’s jokes evoked hearty laughs from the audience, whether these were about "desi weddings," the "Karachiwalas," or about his crushes. Perhaps, the funniest, and most relatable, moment of the night happened when Ghias elaborated on Pakistani mothers’ typical jargon.

At the launch, Humayun lived up to the audience’s expectations, belting out one electrifying number after another, from his Coke Studio covers to ‘Neray aa’ and Sufiana kalam, ‘Aik Alif.’ It was a performance that was high on dhol beats and electric guitar chords. This young man is certainly the best live performer we have ever seen.

Humayun wound up the night by taking charge as the drummer.

Lastly, a word about the Crimson Complex. A chic, multi-storey building, with a very modern appeal, the complex stand tall amidst the rather smallish structures you see in the otherwise bustling Barkat Market.