A tale of two trainers 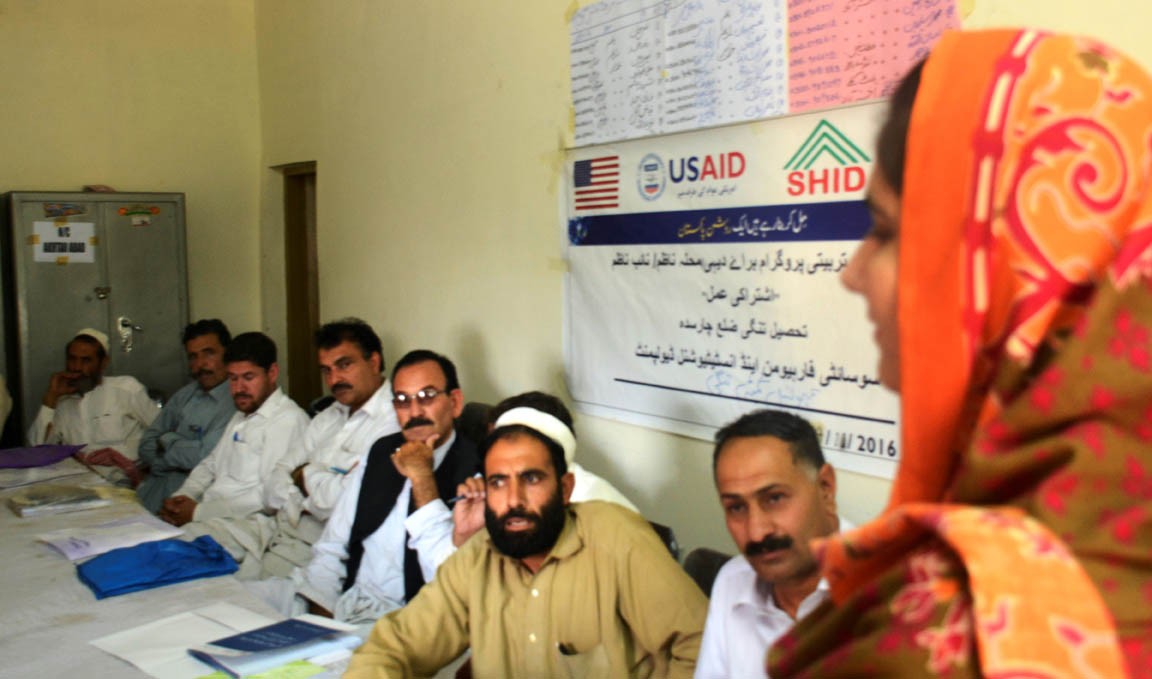 A typical series of training sessions in the remote and conservative Tangi tehsil of Charsadda district in Khyber Pakhtunkhwa! Two new batches of local government representatives! Half literate; half semi-literate! Half proficient in Urdu, the language in which the training sessions are being delivered and in which all the training material given to the participants has been developed; half not!

But something is pleasantly unusual: both the master trainers delivering the parallel one-day training sessions on ‘Resource Management and Transparent Budgeting’ and ‘Participatory Planning’ are women who are not residents of the area and do not speak Pashto, the local language! Still the result of the training is satisfied participants whose beaming faces indicate the excellent quality of learning.

The trainers Najma Razi, 46, and Nida Sultan, 24, are two extraordinary women who are bringing about a positive change in the male dominated Pashtun society. While words may fail to adequately encompass the extent of their achievement, that they are delivering training sessions for Tehsil and Village/Neighborhood Council nazims/naib nazims and members on how to effectively undertake their responsibilities speaks volumes of the courage and professionalism they have exhibited to make a mark for themselves in an otherwise extremely hostile environment.

Limited space is available to women in conservative and semi-tribal societies like the one in Tangi, which borders Mohmand Agency to the west. They are simply confined to the role of a homemaker with barely any interaction with the outside world. Those elected on reserved seats, more often than not, also serve as no better than mere proxies for their husbands, fathers or brothers. Such a patriarchal environment thrives on a culture where women are deemed unfit to play any constructive or meaningful role in the society.

Najma and Nida, as well as their families, had serious reservations when USAID Citizens’ Voice Project (CVP) approached them to conduct training sessions on ‘Resource Management and Transparent Budgeting’ and ‘Participatory Planning’, respectively, for local government representatives from Tangi. However, they found the offer too professionally appealing to decline and were soon attending the Training of Trainers workshop organised by Citizens’ Voice Project in Islamabad.

Najma and Nida demonstrated to the participants, probably for the first time in the latter’s lives, that women were capable of doing whatever men could if provided with equal opportunities!

"I was initially nervous because of my limited experience as a trainer, but Citizens’ Voice Project staff fully supported me, motivating me to use this opportunity as a challenge," says Nida, who has done her Master’s in Economics from University of Peshawar. On the other hand, Najma -- who has done her Master’s in Social Work from University of the Punjab, and Executive MBA from University of Engineering and Technology -- was more concerned about traveling to Tangi on a daily basis and the language barrier with the participants. Her concerns were also allayed during the ToT and after meeting with Citizens’ Voice Project staff.

"Both Najma and I were ourselves beneficiaries in the first place since we were introduced to new concepts and ideas during the Training of Trainers workshop," Nida acknowledges. Based on the knowledge imparted to them during the event, Najma conducted 12 one-day training sessions on ‘Resource Management and Transparent Budgeting’ that were attended by 250 village/neighbourhood council members; while Nida conducted 20 one-day training sessions on ‘Participatory Planning’ that were attended by about 400 village/neighborhood and tehsil council members. The two continued to innovate as their training sessions progressed with a view to better communicating with the participants and improving their training delivery.

"The quality of my training sessions gradually improved as I learned from my mistakes and improvised. My command on the subject matter and my confidence in delivering the training also improved with time. I was not only able to motivate the participants but also formed a bond with them, thus making it a memorable experience for me," Nida says brimming with confidence.

Similarly, Najma also worked on improving her training techniques and modified the contents to better suit the needs of the participants. "At times, I had to employ innovative means to achieve the training objectives. I used to club a literate participant with a semi-illiterate one or one who could speak Urdu fluently with the one who could not. The participants were extremely helpful and if someone did not understand a concept they explained it to him in Pashto. Similarly, if a participant could not ask his question in Urdu, others used to translate it for me," she elaborates.

The participants also echoed these sentiments and were all praise for the two women trainers. "We were highly impressed with their professional behaviour. Their training delivery was excellent and they simplified the most complex topics for us. Even our illiterate colleagues gained a lot from these training sessions," says Sohail Khan, a youth councilor of Dakki Village Council.

The best part of the two master trainers’ achievement is that despite the largely theoretical content of the training sessions, they managed to not only retain interest of the participants but also won their respect and admiration aplenty. Najma and Nida demonstrated to the participants, probably for the first time in the latter’s lives, that women were capable of doing whatever men could if provided with equal opportunities!

Najma and Nida, banking on their experience and youthful exuberance, respectively, changed the perspective of Tangi’s local government representatives on women. One hopes that the palpable behavioural and attitudinal shift among the participants as a result of the USAID-funded training sessions is a harbinger of the positive change in Khyber Pakhtunkhwa.

A tale of two trainers