Let’s speak with one voice

The right to set, define, and defend the national interest belongs to the people of this country alone and that path is full of several social media pages with memes in the corner 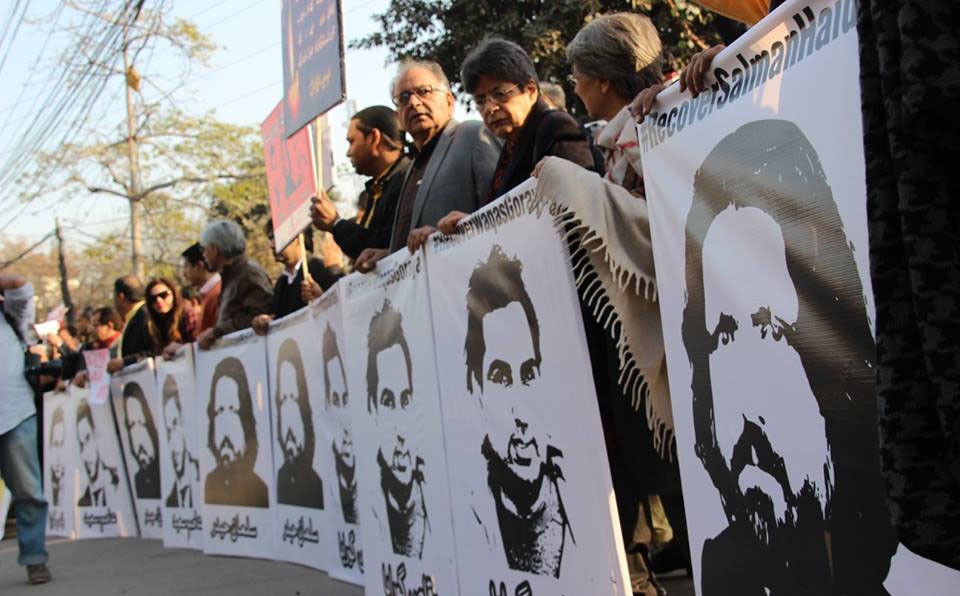 In the past one week or so, five bloggers went missing in Pakistan. No one knows their crime but everyone knows why they have disappeared. Those who are missing seem to share a few common characteristics though. They either ran blogs or contributed to ones that criticised religious bigotry and the security establishment’s heavy involvement in the state’s political affairs.

How do we make sense of their disappearance?

For a long time, the liberals and progressives felt safe simply because they didn’t count too much. That remains true today. One can see the same 20 odd faces appearing in every protest organised by the liberals and the left wing political groups in this country. This remains true for protests being organised in Lahore, Karachi, and Islamabad this time. You see the same faces in front of press clubs; chanting slogans and making the same kind of demands. Nobody bothers to stop and ask them why they are there. Nobody cusses at them sitting in their cars because they are not even a traffic nuisance.

Who would want to pick someone of this ilk?

News reports suggest that these bloggers were vocal critics of the military as well as militancy. Some people suggest they may have criticised CPEC as well. They did all that through various social media platforms (Facebook pages, Twitter accounts, etc.) with some really odd-sounding names like Bhensa, Molbi, or Mochi. We don’t know who took them seriously other than the people who have picked them up. I must admit I only searched them online after these people went missing. I have seen Bhensa memes floating around the internet; some of them funny others not quite so. But who really cared? Does the list include people who liked them or shared them or commented under them or tagged their friends? Are they all suspects? We wouldn’t know.

We do know one thing for sure. Those who abducted them got really upset by their satire.

Pakistan’s establishment faces one big challenge in ruling over Pakistan (whether directly or indirectly) -- how to homogenise a multi-ethnic, multi-lingual, and multi-cultural society? This has been the bane of their existence from day one. How do you make everybody the same when everybody is different?

Two weeks ago, the Human Rights Ministry admitted that 936 people have been found dead in Balochistan in the past five years. In a ‘normal’ country, this would have been enough for at least the minister to resign. Or enough to order a high-powered committee to do a serious investigation. But we know that nothing like that would ever happen here; so why bother with all such details.

Pakistan’s establishment faces one big challenge in ruling over Pakistan (whether directly or indirectly) -- how to homogenise a multi-ethnic, multi-lingual, and multi-cultural society? This has been the bane of their existence from day one. How do you make everybody the same when everybody is different? It’s important to do that, as a homogenised society is easy to mould in its own ideological leanings. Islam became an easy tool. Yet, it would be unfair to say that military is the only one that has used Islam. Politicians have also used it to pander to their voters. But where the latter’s use of religion is only to plead their case to a conservative vote bank, the former use of religion has turned out to be more sinister. It institutionalised it within the state structure and used it to expand its writ.

Religion is an easy tool for homogenisation if that is the desired outcome. A homogenised society is easier to control by dictatorial forces because you have just scared away all dissent. Once you get the monopoly over setting both the agenda and the discourse, it is only a matter of time before public opinion gets shaped a certain way.

Our establishment does not like any challenges to such agenda-setting power; even if it comes in the form of social media pages that identify themselves as Bhensa, Molbi, or Mochi.

This kind of worldview is unable to see beyond its own narrow interests. It sees plurality of opinion as a problem. It wants to see only a certain kind of Islam that accepts its obsession with India, US, and all others who are constantly conspiring against its rise to the top of the world. It wants everybody to have the same interpretation of Pakistan’s history. There cannot be any questioning of Jinnah or Iqbal or any of the other great leaders’ role.

Some people just out of sheer boredom or curiosity want to ask: but why? The powers-that-be find it distressing that people don’t want to readily accept this. On top of all this, they also want to keep a big chunk of resources to themselves and don’t want any one questioning it. These powers have recently discovered that something like CPEC can also be used to homogenise the country and expand their own business empire at the same time. They don’t like anybody criticising their role in this project because it should be obvious to everyone that this project will transform Pakistan completely into an economic power house; no questions asked. They can also pronounce that Pakistan’s destiny is to be an Islamic welfare state and this is what our enemies want to deny us.

Pray tell, who asked for your opinion on this matter in the first place?

But questions like these are -- especially if they accompany a meme with a Bhensa in the corner -- forbidden because they challenge the ‘national interest’, which is defined and protected by them. So, the security establishment eventually picks up or harasses all those who try to criticise it persistently.

Is there any way to reform these institutions? Well, I think, there is. But that path is full of several social media pages with memes with Bhensas or Molbis or Mochis in the corner. That path also consists of writing consistently against these institutions’ desire to set, define, and defend the national interest. That right belongs to the people of this country alone and no one can take it away from them.

So, voice your criticism openly and without fear. Do not hide in fear. These institutions have totalitarian pretensions; they neither have the capacity nor the will to abduct all of us when we speak with one voice. For this reason alone, the absence of Salman Haider and others should only strengthen our resolve to fight for a pluralist, progressive, and a democratic Pakistan.

Let’s speak with one voice