"It extends to the whole of Pakistan"

Could the public warnings put up at various paan joints and tobacco kiosks around the city, against the sale of cigarettes to the under-18s, help to do the needful? 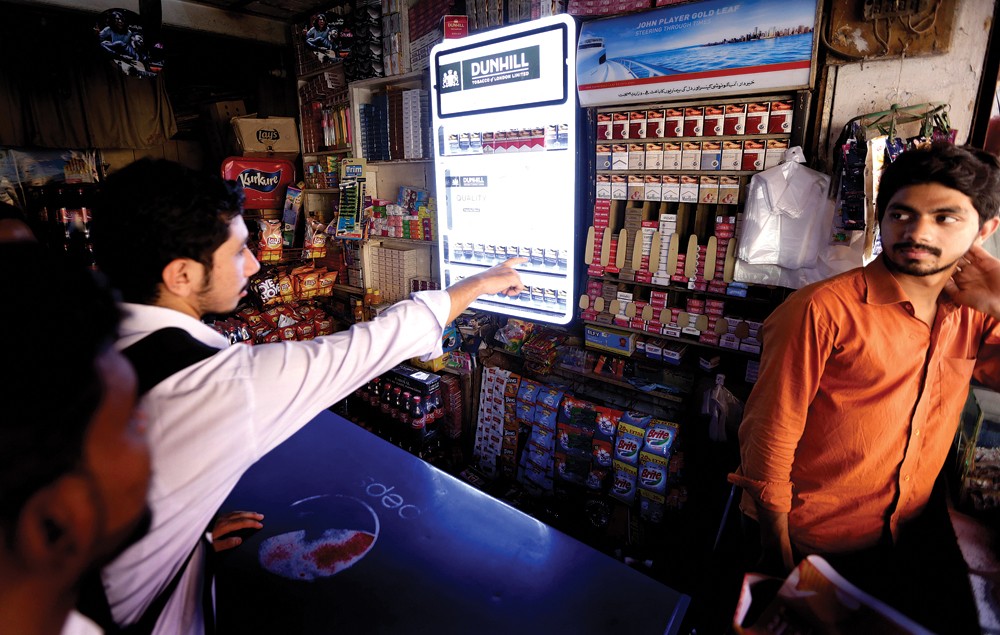 It’s quite ironic. A youth, clearly below the age of eighteen, is spotted taking a drag on a cigarette, right outside a tobacco kiosk that has an entire warning displayed on its entrance that reads, "Cigarettes are not sold to the people below the age of 18 years."

Well, it’s a common sight now. And the notices, issued by the city district government, appear to make no change to the situation. For the shop owners, putting them on display is only meant to escape any penalty. Or, so it seems.

It may be mentioned here that the government had earlier also made it mandatory that no such kiosk would exist within a radius of fifty metres of a school and college. It didn’t prove to be very effective either.

Commenting on the situation, a schoolteacher says, "People under 19 years of age routinely smoke [cigarettes]; some of them like to chew gutka, and they can be found at almost every other paan joint around the city. So much for the warning notice!"

The teacher appreciates the intention of the government, but insists that the entire campaign should be redesigned.

Muhammad Saleem, 16, admits to being "a gutka addict." Talking to TNS, the young lad from Shad Bagh reveals that the item is easily available. He obviously means that the people his age can get it at a shop any day.

Interestingly, every shopkeeper has his regular gutka customers. He doesn’t think twice before selling it to them. It’s only when he sees a new face does he pause for a moment. All of them know it’s a banned item.

According to a paan shop owner, "We strictly follow the rule [of not selling cigarettes to the under-18s].

"As a matter of fact, the shopkeepers are selling cigarettes to people of every age. Putting up posters/notices, it seems, is just an eye wash, to avoid action by the government."

"But what do we do when the [youth] don’t leave our shop until and unless they have purchased the cigarettes. This is despite the notices we have pasted outside the shop door. They seem to have no care. When we refuse, they often get into a hot argument."

A cigarette vendor seems to know it well. He quotes the law, saying, "The anti-tobacco ordinance has 18 clauses. But I ask you, why the clause talks about prohibiting sale of cigarette to the minors? Is it because we are an easy target for the district administration as well as the police that can extract some money from us hence?"

"I have been dealing in tobacco for almost 60 years," says another shopkeeper in the area. "No one has ever asked me to put up such notices on my shop. We already know that cigarettes should not be sold to minors or teenagers. And, we follow the law. So, I don’t think the ordinance helps to check smoking among the teens any better."

The shopkeeper, who does not want to be named, relates an incident where he refused to sell a cigarette to a teenager. "He called an older friend, who showed me his CNIC and we had to sell him the cigarettes he wanted. Now both of them deliberately enjoy puffs in front of my shop as if to jeer me."

He suggests that the health ministry should place a ban on the sale of loose cigarettes. In developed countries, such sale is prohibited. "They are only allowed to sell packs," he adds.

Talking to TNS, Qamar, who claims to be the president of a paan association, says, "My shop was sealed by the district government on the pretext that I did not display the warning notice. I tried to convince the official that I had displayed it but it was inside the shop.

"Actually, the government officials use the law to extort money from us," he says.

In another part of the city, a paan vendor says, "This is my ancestral shop. My father opened it some 40 years ago. At that time, there was no educational institution in its vicinity. Today, a lot of home schools and academies have come up here. Is it justified to ask us to move elsewhere?"

The government has its own ground to stand. A city district government spokesman says the administration has launched a crackdown on paan shops that are selling cigarettes to under-age people.

"Dozens of shopkeepers have been fined and their kiosks sealed. What’s more, those smoking at public places are also being fined routinely," he reveals.

Rejecting the allegation made by the paan vendors that the district administration officials are pushing for bribes in the name of the prohibition ordinance, the spokesman says action is being taken against vendors who are violating the Prohibition of Smoking and Protection of Non-smokers Health Ordinance, 2002.

Nadeem Iqbal, Chief Executive Officer, The Network for Consumer Protection, is all praise for the step taken by the health ministry and says the government must take it further on.

He also says, "The cigarette sellers have become a mafia. They target minors, especially those between ages 13 to 16. Fifty-two percent of our population consists of youth and more than six lakh cigarette vendors sell commodities to them. Whenever such measures are taken to discourage smoking among the youth, paan and cigarette associations start crying foul and complain of police harassment."

Reproducing some contents of the Prohibition Of Smoking And Protection Of Non-Smokers’ Health Ordinance, 2002

"It extends to the whole of Pakistan"