In the name of charity 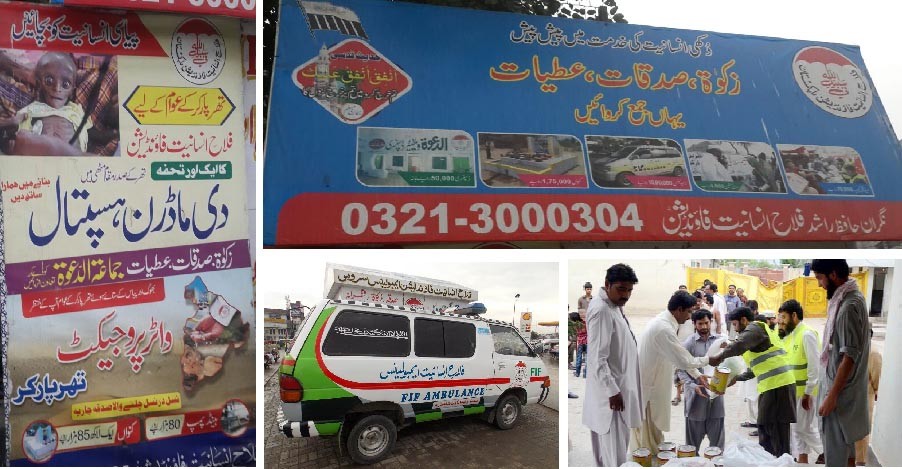 Having a network in 260 cities across Pakistan, Falah-e-Insaniat Foundation (FIF), the charitable arm of Jamat-ud-Dawa (JuD), is considered as one of the largest and fastest growing non-governmental organisations (NGOs) of the country.

There are 245 professors, 523 doctors and 1942 members of para-medical staff associated with the FIF.

It is the first NGO of Pakistan to introduce private fire tenders to help citizens. Currently, it has two fire tenders and both are stationed in Karachi. "By May next year, we have a plan to purchase more units in five cities including Multan, Faisalabad, Hyderabad, Pindi-Islamabad and Lahore," says Abdul Waheed Bhandani, Head of Karachi Rescue Service, FIF.

According to the Fire Department of Karachi Metropolitan Corporation (KMC), 4476 cases of fire were reported last year. To cope with this situation, there are 16 fire tenders and only two fire snorkels available for Karachiites. Out of 22 fire stations, only 12 are operational.

Founded in 1996, the FIF was first spotted during the 2005 earthquake that badly struck Azad Kashmir and northern areas of Pakistan. The team of FIF volunteers was the first to reach on the site of the recently crashed PIA aircraft at Havelian near Abbottabad.

Jamat-ud-Dawa, the parent organisation of FIF, is constantly under fire and various sections of society believe FIF is the front for JuD. While implementing section 11W of the Anti Terrorism Act of Pakistan, the Ministry of Interior had placed Jamat-ud-Dawa "Under Observation" on January 17, 2007; since then its status has not changed. Section 11W of Anti Terrorism Act says, "A person commits an offence if he prints, publishes or disseminates any material by audio, video-cassettes or in written, photographic, electronic, digital, wall chalking or any method which incites religious, sectarian or ethnic hatred or gives projection to any person convicted for a terrorist act, or any person or organisation concerned in terrorism or any person or an organisation placed under observation".

"God gives us and we spend in the way of God. We don’t count the donations we receive because it diminishes its significance and this is a rule," says chairman FIF, though he avoids sharing the exact amount of donations.

On December 10, 2008, the United Nations declared Jamat-ud-Dawa (JuD) as the terrorist front of Lashkar-e-Taiba (LeT) which was also designated as an entity of al-Qaeda on the same day.

Many believe that religious organisations make inroads in the masses through charity work to drive their agenda and network. Muhammad Amir Rana, Director Pak Institute for Peace Studies (PIPS), says: "At the time of 9/11, there were 46 Islamic charity organisations working in Pakistan. Not only here but all over the world, it was the norm of religious or church-based organisations to expand their tentacles with charity. That started from Hassan al-Banna and Sayyid Qutb’s time; later other organisations adopted it."

JuD was founded by Hafiz Mohammad Saeed in 1985. The Karachi Headquarter of JuD is spread over 2.5 acre of land worth billions of rupees. Guarded by armed men, the complex is located opposite the Safari Park at University Road. The complex has secondary school, seminary, hostel, hospital and accommodation for staff. Different local wings of JuD including publication and media monitoring operates from here. The FIF operations in Karachi are also run from this huge complex.

According to Hafiz Abdul Rauf, the Chairman of FIF, they had started charity work since the birth of JuD "but it was formally established in 1996. The first significant rescue operation was carried out in 2003 from Interior Sindh when Badin city was hit by flood."

There are seven hospitals run by the Foundation in Muridke, Gujranwala, Hyderabad, Karachi, Faisalabad and Multan. An FIF report claims that during 13 years of service from 2003-2016, around 0.5 million people have been treated in these six hospitals. There are 176 medical dispensaries. The outfit has a data bank of 66,890 registered blood donors.

The report says FIF has a fleet of 283 ambulances that operate in 242 cities. Tracker is installed in all the ambulances which are monitored by the central monitoring office in Lahore. FIF is also digging wells in the country’s remote areas of Tharparkar, Balochistan, Baltistan and Azad Kashmir. So far they have dug up 1,719 wells and have installed 1,605 hand and electronic pumps.

The FIF report shows that the foundation has a special focus on Tharparkar region where it has bored 1,116 wells and installed 517 hand and electronic pumps. It claims to have distributed cooked food among more than one hundred thousand people and has supplied ration to more than 65,000 families in Tharparkar. It has fed around 250,000 children pediatric meal and has distributed 168,451 packets among people containing clothes and beddings.

FIF regularly organises rescue workshops across Pakistan. So far the FIF has conducted 3,621 different rescue operations around the country.

Deputy Secretary of Information JuD, Abu Nadeem says, "FIF is the backbone of Jamat-ud-Dawa". He also revealed that in case of any disaster, media teams also coordinate and travel with FIF teams to reach the spot.

To run such a huge level of charity work, finances and transparency is required. FIF collects donations from various means and that includes mosques, hides of sacrificial animals, Sadqat and Zakat and donation boxes. "The biggest source of our funding is the donations we collect from outside mosque. Those five, ten, twenty rupees matter a lot," says Chairman FIF Abdul Rauf. Thousands of donation boxes are placed at shops and houses as well, he says.

The Foundation’s website is updated on a regular basis but there is no balance sheet of FIF’s expenses available there. When asked about the details of expenditure and donations, the Chairman of FIF says, "We don’t make any budget of the donations nor we have any bank account."

To a query about the transparency of the system, Abdul Rauf says, "We never refuse anyone who wishes to check our accounts. We maintain record of each and every penny, receipts are given for every donation, we maintain roznamcha (daily sheet), ledgers and balance sheet; a chartered accountant carries out audit of our accounts."

"God gives us and we spend in the way of God. We don’t count the donations we receive because it diminishes its significance and this is a rule," says chairman FIF, though he avoids sharing the exact amount of donations.

The number of FIF volunteers is in hundreds of thousands; all are registered as JuD members. Moreover, there are thousands of paid workers including drivers, technicians, rescue workers, management and administration staff. There is no proper pay scale for the workers. The organisation assesses their need and awards wazifa (stipend) to them. The organisation claims that the lower staff gets more pay than high-level management staff.

In case of disaster or any calamity, FIF works with different government institutions. The FIF chairman says, "We coordinate and perform rescue operations along with National Disaster Management Authority (NDMA) and Pakistan Army."

Criticising the country’s disaster and emergency body, Hafiz Abdul Rauf says, "NDMA is not working beyond distribution of tents; the newly established rescue and emergency wings (charity) are working more effectively than NDMA which is not performing its job as it should be. When there is a disaster they don’t have proper equipment and expertise."

The FIF believes that social media is an important tool in global affairs. The social media team of the organisation is effectively using Facebook, Twitter, Youtube, Google plus, Vimeo and Instagram to spread its words. Google Play Store also offers its application with the name ‘Serving Mankind’.

On Nov 24, 2010 the US Secretary of State, in consultation with the Secretary of the Treasury and the US Attorney-General, designated Falah-i-Insaniat Foundation as a terrorist organisation. The same day, the Chairman Hafiz Abdur Rauf was also designated as a terrorist by the Treasury Department of the US. Recently, on December 28, 2016, FIF Vice Chairman Shahid Mehmood was designated as terrorist by the State Department of the United States.

So far, neither the FIF nor any of its office-bearers is under surveillance in Pakistan.

Responding to the international sanctions, Abdul Rauf says, "I don’t care about America. Why should I pay heed to them when the work is going on in my country and there is no hurdle in it. We have operations outside Pakistan; we are not bothered with these sanctions."

Amir Rana says that the FIF doesn’t function without planning. "They initially set the target to get the support base through medical and education charities -- to gain a platform to establish JuD’s political ideology. When there is some pressure (outside or inside the country), the Hindu community from Tharparkar and Umerkot rallies to their defence."

In the name of charity