A look back at the music milestones of the past year 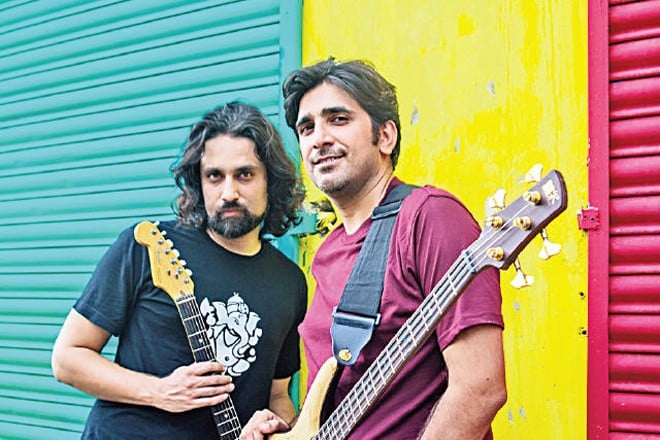 Musically speaking, 2016 was a spectacular year. Though the untimely, shocking and tragic death(s) of Amjad Sabri and Junaid Jamshed continue to haunt us, there are plenty of reasons why we can and should celebrate the evolving music scene in Pakistan and the artists who are still with us.

Our story begins with the country’s biggest and most publicized music TV show, namely Coke Studio. After six years under Rohail Hyatt as producer and another two under Strings, Coke Studio opened up its platform to multiple producers this year. While Strings took on the role of producer and director, six music directors such as Noori, Jaffer Zaidi, Shani Arshad, Shuja Haider, Shiraz Uppal and Faakhir were given room to create, collaborate and inspire. Though all music directors got at least one song right, Noori and Jaffer Zaidi truly stood out in terms of sound, ideas and creation.

Meanwhile, Nescafe Basement, in its fourth season, also had a good run. Spearheaded by Zulfiqar Jabbar Khan aka Xulfi, the show managed a combination that included both covers and originals. The one act that did stand out was the All-Girl Band; their gorgeous cover of John Newman’s ‘Love Me Again’ got endorsement from Newman himself as well as industry insiders like Haniya Aslam and Ali Zafar. The All-Girl Band also released another single last month which is called ‘Choo Liya Aasmaan’ and is an anthem that is meant to celebrate fashion giant, Khaadi’s 18th birthday.

Another project that made a mark this past year was a new initiative called Cornetto Pop Rock. The inaugural edition included three live shows, one each in Karachi, Lahore and Islamabad and several unique collaborations that were accompanied by music videos and featured artists like Ali Azmat, Noori, Zoe Viccaji, Umair Jaswal, Quratulain Balouch, Qurrum Hussain aka Q (one half of music duo Josh) and Komal Rizvi.

The second new initiative worth covering is Braadri Broadcast, a music project whose goal is to bridge cultural and societal division by promoting ethnic harmony via music. Featuring an entirely traditional, all acoustic, 32-piece desi orchestra, it includes 10 original musical compositions that have been performed by the orchestra in 10 different languages such as Sindhi, Punjabi, Balochi, Pashto, Siraiki, Shina, Brusheski, Marwari, Hindko and Urdu. With Hamza Jafri, Co-Ven front-man, attached to the project as creator and producer, the songs that we’ve heard so far are beautiful, organic and truly special. Braadri Broadcast also includes several prolific industry experts in various roles. Song direction and composition duties have been handled by Akram Khan while Sikandar Mufti is the Technical Head and Creative Associate. Rola and Rushk duo Uns Mufti and Ali Jafri are attached to the project as Video Director and Video Edit & Post Specialist respectively, while theatre director Nida Butt is attached to the series as Executive Producer and Bilal Nasir Khan, co-founder of indie music collective Forever South (FXS), is spearheading the audio production department. Describing the motto behind Braadri Broadcast, Hamza Jafri explained: "We live in a multicultural society and yet, people from different traditions prefer to segregate. Braadri Broadcast seeks to overcome these barriers through the universal language of music."

Music also had its conversational moments as the second edition of Lahore Music Meet returned with aplomb. Music enthusiasts, artisans, artists, patrons, industry representatives and academics got together and continued an intelligent dialogue on what music needs. Artists as eclectic as Noori, Zoe Viccaji, Rachel Viccaji, Ali Zafar, Mai Dhai, Naseer & Shahab, Sara Haider, Taha Malik, Ali Suhail, Haroon Rashid, Red Blood Cat, Tina Sani and Ahsan Bari (among many others) participated in LMM this year in the capacity of speaker and/or performer.

Aside from all this, one major announcement came from Google this year, namely the introduction of the ‘YouTube Partner Programme’ through which artists and content creators from Pakistan will have a chance to earn money. This announcement was made at launch event in Karachi that featured a terrific list of performers such as Ali Gul Pir, Noori feat. Haroon Shahid, The Justin Bibis, Saad Haroon, Danish Ali and the All-Girl Band from Nescafe Basement. Reps from Google were also present on this occasion, who spoke about the union of technology and creative collaboration.

"We are delighted to launch this new offline experience on YouTube with some of the top Pakistani players in entertainment. By making these popular videos available for temporary offline viewing, our partners will help fans connect more easily with their favorite content, while also helping bring more viewers to their videos. We hope to keep finding better ways to make video content more affordable and accessible in Pakistan," said Tania Aidrus, Head of Business Development, Next Billion Users team at Google Asia Pacific.

In terms of live music shows, the year offered plenty to fans. Salt Arts continued their brilliant run and gave Karachi many nights of music with artists as eclectic as Jimmy Khan, Ali Hamza and many more. Red Bull Sound Clash made its way to Pakistan this year as Ali Azmat and Umair Jaswal went toe-to-toe while Coke Studio live gigs (featuring three of CS’s most successful acts - Meesha Shafi, Umair Jaswal and Noori) also earned applause from fans in Karachi, Lahore and Islamabad. Cornetto Pop Rock also allowed fans a chance to see a handful of artists in cities like Lahore, Islamabad and Karachi.

Music group Rushk’s haunting ways and beautiful expression no longer stayed restricted to the studio, as the band (featuring Uns Mufti, Tara Mehmood, Sikander Mufti, Ali Jafri and Ziyyad Gulzar) staged a show in Karachi early on last year and had us mesmerized. On a similar note, the creator of Ismail Ka Urdu Sheher, Zohaib Kazi not only announced his ambitious plans of exploring the idea of translating his book into Urdu but also debuted the musical effort, Karma Kolective during the inaugural edition of FocusPK, which featured the likes of Zeb Bangash, Rachel Viccaji and musical gods like Omran Shafique and Kamran "Mannu" Zafar.

Music group Noori, who had a phenomenal run in 2016, gave neglected fans a chance to see them onstage towards the second half of the past year. Their Punjab tour (organized by Punjab Group of Colleges) gave the group a chance to play across multiple territories such as Okara, Bahawalpur, Multan, Faisalabad, Sargodha, Gujranwala, Gujrat, Sialkot, Islamabad and Lahore.

The inaugural edition of the Pakistan Super League also had plenty of music moments as Ali Zafar created its official anthem and acts like Khumariyaan and Ali Azmat sang soundtracks for teams like Peshawar Zalmi and Karachi Kings respectively. With a second edition on the cards, its been revealed that Ali Zafar will be singing another anthem for PSL-2.

Shehzad Roy, usually making music with a higher purpose, embraced a bad-boy fantasy in the music video of ‘Jind Jaan’ and had us rooting for him. Joined by the likes of Iman Ali and YBQ as well as Zoe Viccaji, who sang Punjabi verses on the number, the video served as a surprising change of pace from Roy. Zoe Viccaji’s music video of ‘Ho Jao Azaad’ is also worth applauding; not only did it capture the beautiful locales of Pakistan with flair, it also wowed us because of the electric pop sound that the song came wrapped in.

Taimoor Salahuddin, who plays music under the alias Mooroo, also added flavor to the music scene by releasing his clever and inventive debut album. All of the nine songs featured on Pehli were written, composed and arranged by Mooroo and produced under his Aflatoon Studios setup. Uzair Jaswal, the younger Jaswal brother also released his album, Na Bhulana, towards the end of 2016 to a reasonably positive response.

Apart from Mooroo, singer-songwriter Zeb Bangash, also made us fall in love with her multi-cultural folk-rock outfit, Sandaraa, which she co-founded with a Brooklyn musician called Michael Winograd. Their self-titled debut album, available on Patari, is the stuff dreams are made of.

"Patari Aslis Vol. 1 is fresh and vibrant. It is a treat for the fans and is also highly recommended as an excellent starter’s pack for anyone who wants to take a glimpse into the thriving and diverse indie music scene of Pakistan," wrote Omer Wahaj in his review for Instep.

Other artists who have announced full-length albums include artists like Khumariyaan, Sounds of Kolachi, Faraz Anwar and Zeb Bangash, who is working on a pop album after enchanting us with world music as Sandaraa.

In terms of singles, one track that must be mentioned is Chand Tara Orchestra’s ‘Khaak Nasheen’. Running just over seven minutes, the captivating ambient-meets-sufi-meets-psychedelic is less of a song and more of a journey. Features music giants like Omran Shafique, Gumby, Babar Sheikh and Shahryar Raza, the song is in a word, brilliant.

Zeb Bangash and Haniya Aslam, both pursuing individual paths musically came together this year and released a new track from their upcoming EP as a tribute to Lahore, the cultural heartland of Pakistan, after a tragic attack in March ripped through a park on Easter Sunday and claimed the lives of over 70 people including several women and children. Revealing the sentiment behind the music video, directed by one Umar Riaz, Zeb and Haniya took to their Facebook page and said on the matter: ‘Dadra’ conceived as a lullaby to the nation and a video as an exploration of Lahore’s past, present and future. This is for both Lahore and Pakistan, for resilience amidst the darkest of times."

Others who returned with music videos this year include Ali Sethi whose rural beauty ‘Mahi Mera’, directed by Umar Riaz, showcased Pakistan’s rugged rural landscape in delightful fashion. On the song, Sethi is joined by folk artist Jamaldin who Sethi discovered when he heard him sing at a wedding at his maternal grandfather’s ancestral village.

One must also applaud the miraculous quartet from Peshawar, Khumariyaan, who created a beautiful cover of the Game of Thrones and released it with an equally magnificent music video, which was shot in Haveli Sujan Singh in Rawalpindi. And last but not least, the unit called Tonight, Us, which consists of Jamal Rahman (True Brew Records), Sameer Ahmed (Co-Ven, Jimmy Khan), Ibrahim Akram (Red Blood Cat, Mekaal Hassan Band) and Rufus Shehzad (Meesha Shafi, Symt) whose collaboration with Jimmy Khan on the song, ‘Baarish’ remains an electronic, tripped out delight like no other.