WAPDA reigned supreme in the recently-concluded Quaid-e-Azam Trophy. The event which witnessed several stellar performances lacked sporting pitches. If cricket is to improve, PCB will need to raise the standard of pitches 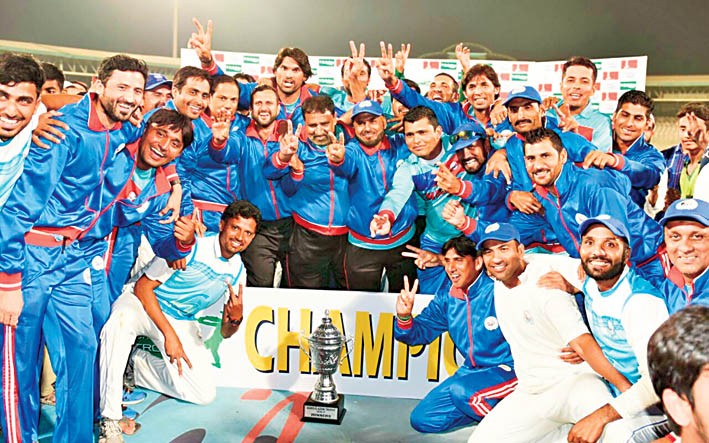 Finally one of the country’s most resourceful departments, WAPDA, ended a long title drought by winning their maiden Quaid-e-Azam Trophy title when they upstaged two-time winners Habib Bank Limited (HBL) in the final at the National Stadium Karachi from December 10-15. Although the game ended in a draw, WAPDA emerged victorious on the basis of first innings lead.

It was a dream event for WAPDA’s key player Kamran Akmal, who struck five centuries, ending the marathon with 1035 runs. He single-handedly guided his team to unlikely victories. Akmal clicked where others failed to perform. He surpassed Wasim Bari as Pakistan’s most successful wicket-keeper in the first-class cricket during the season when he reached 829 dismissals. Bari had 828. Kamran’s current tally behind the stumps is 841 in 221 first-class matches.

The selectors are likely to pick him in Pakistan’s squad for the One-day Series against Australia.

WAPDA’s skipper Salman Butt was the hero of the final as the left-handed former Pakistan captain scored centuries in both innings. He demonstrated great patience when he batted for four sessions to avert the looming defeat.

Butt wrapped-up the season with 741 runs, which included four hundreds.

But the man in WAPDA who was most impressive was young Mohammad Saad. Although he scored 495 runs with two centuries, there was a special batting spark in him. He may turn out to be a star as a top-order batsman.

All-rounder Khalid Usman was also impressive as he not only snared 34 wickets with his left-arm spin bowling but also scored runs down the order whenever his team needed.

It was also a successful season for HBL, a young side with most of the players having the experience of playing for Pakistan A. Inzamam-ul-Haq’s nephew Imam-ul-Haq, the third leading scorer with 848 runs, did a fine job for HBL. It would not be wrong if he is called Mr Consistent. I have been following him closely and he has always been seen doing something solid with the bat in all sorts of cricket. The player has a bright future.

Imam had a nice opening pair with Mardan-born Fakhar Zaman (663 runs) who also had a handy contribution in his team’s fine run.

In the absence of Test pacer Umar Gul, who was not available due to thigh injury after appearing in the start of the season, left-arm pacer Usman Shinwari carried the bowling load of HBL. He finished with 38 wickets. He is the same bowler who was surprisingly sent to Dubai to represent Pakistan in a couple of T20 matches against Sri Lanka in 2013. However, since then he has been ignored. He has good pace and is hard-working. The Pakistan Cricket Board (PCB) should take care of him. HBL’s 22-year-old Fahim Ashraf also impressed me. The medium pacer can also bat and can turn out to be a solid all-rounder.

Sui Southern Gas Company (SSGC) were unfortunate not to qualify for the final when they conceded lead in the drawn match against WAPDA in their last Super Eight stage outing at Hyderabad. Solid batsman Asif Zakir was the man behind SSGC’s golden run. The 33-year-old deserves a place in Pakistan’s team as he remained extra-consistent by ending as the second leading scorer of the season with 853 runs which featured four centuries.

Young left-arm spinner Mohammad Irfan (30 wickets) and international all-rounder Aamer Yamin (28) did a fine job for SSGC in the event. Irfan is a future prospect.

Mohammad Hafeez-led Sui Northern Gas Pipelines (SNGPL) failed to defend the title. Not only was Hafeez out of form but the team also had some injury problems.

Iftikhar Ahmed, who played a Test against England recently, was among the top finishers of the seasons with 713 runs which he scored with the help of three centuries.

The last year’s runners-up United Bank Limited (UBL) narrowly missed the final spot. Shan Masood-led side also faced a casualty near the end when their key players Yasim Murtaza and Karamat Ali got injured while getting out of Regent Plaza which had caught fire. It was their last Quaid-e-Azam Trophy game against HBL and had to be abandoned.

International all-rounder Hammad Azam and wicket-keeper batsman Umar Siddiq did a fine job for UBL. Hammad not only scored 530 runs with an excellent century which came at a tough time but also got 20 wickets with his gentle medium pace bowling.

Karachi Whites were the only regional side which reached the Super Eight stage. Hamza Ghanchi (700 runs), Behram Khan (701 runs) and Tabish Khan (62 wickets) were their main performers.

Young seam bowler Mohammad Abbas remained the most impressive as the Sialkot-born lad finished the event as the leading wicket-taker with 71 scalps. His efforts nearly took KRL to final.

Fast bowler Atif Jabbar is another fine player. He took 50 wickets in the season while playing for National Bank of Pakistan (NBP). Usman Salahuddin (843), also of NBP, once again showed that he is a reliable middle order batsman in the long format of the game.

FATA did a fine job to retain their seat for the next season.

It was a disappointing season for Pakistan International Airlines (PIA) and Karachi Blues who both got demoted to the second-tier competitions.

PIA ended with nine points, while Karachi Blues failed to open their account. PIA will have to introduce contract system as it is not possible in this age to recruit players by offering them meagre salaries. The Quaid-e-Azam Trophy lacked quality because most of the star cricketers were engaged in national duty abroad. And then the Pakistan Cricket Board’s (PCB) decision to release some cricketers for Bangladesh Premier League (BPL) further downed the quality. But the PCB had to do that to keep good relations with the Bangladesh board.

State Bank of Pakistan (SBP) ground in Karachi got the first-class status during the event. But in the ongoing One-day Cup the teams have expressed their dislike as its pitches are often extremely wet.

The event lacked sporting pitches. If cricket is to improve, the PCB will need to raise the standard of the tracks.