In the shadow of society

Days after the administration raids an Ahmadi printing press for distributing ‘hate material’, a 1000-strong violent mob attacks an Ahmadi place of worship 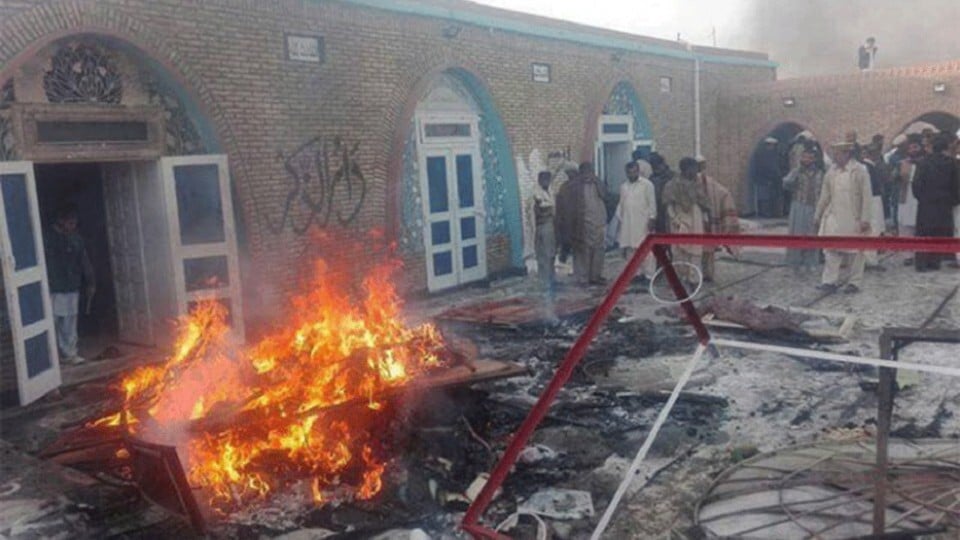 Police arrested four people belonging to the Ahmadiyya community on charges of hate speech and registered criminal cases against them under the blasphemy and anti-terrorism laws.

"On a complaint that banned material was being published in Chenab Nagar, district Chiniot, a local CTD team raided and confiscated that material. Monthly Tehreek-e-Jadeed, was banned by government of Punjab vide notification dated 19-12-2014 and Daily Al-Fazal was banned vide notification dated 26-10-11. Since both publications had been banned but the administration was still publishing and distributing these, the material was ceased and the case registered. Printing press has been sealed and four accused persons have been arrested. Investigation is underway," a statement by the counterterrorism department spokesman read.

According to the police, through notifications in June and December 2014, the Punjab government had banned the said publication, and referred to it as "seditious and treasonable". However, the community says a petition was filed in the Lahore High Court, and the presiding judge had ordered no further action against the publication (Al-Fazal) till the next hearing which is yet to be fixed.

"If there is any objectionable and hate material in our publications, police should make it public. We are peaceful and patriotic. And we have court orders against this unlawful ban on our publications," says Salimuddin, spokesperson of Jamaat-e-Ahmadiyya Pakistan.

"The Ahmadis in Pakistan are being persecuted since the passing of the anti-Ahmadi laws in the 1980s. Islam does not allow us to legislate against others for reciting Quran or greeting etc," says Javed Ghamidi

He adds that the elements that "publicly utter hate remarks against us, commit violence and hurt our sentiments and properties remain at large while our community is targeted and victimised through discriminatory laws".

"The Ahmadis in Pakistan are being persecuted since the passing of the anti-Ahmadi laws in the 1980s. Islam does not allow us to legislate against others for reciting Quran or greeting etc," says Javed Ghamidi, a prominent Islamic scholar who was forced to leave the country some years back because of threats from extremist factions. He was conversing with TNS on telephone.

He believes such laws, passed on the insistence of extremist groups, were meant to persecute the community. Now, "it is the state’s utmost duty to stop the misuse of these laws."

"The intellectuals and educated people must create an environment for a positive debate in the country, and the state should be consistent in its support to stop this nonsense," says Ghamidi.

In the past few weeks, the anti-Ahmadi campaign has been in full force, beginning with none other than the newly-appointed army chief who became a target of accusations. It became worse with the Prime Minister Nawaz Sharif’s decision to rename the Quaid-i-Azam University’s National Physics Centre to Dr Abdus Salam Centre for Physics in the first week of December.

Following the Rabwah incident, on December 12, the day when Muslims were celebrating the birth anniversary of Prophet Muhammad (pbuh), a violent mob of about 1000 people attacked an Ahmadi worship place (the laws do not allow them to call their worship place a mosque) in village Dulmial, some 35 kilometres from Chakwal. A case regarding the actual ownership of this land has been pending in the court since 1996. The administration managed to have the worship place vacated, by taking the 40 odd people out but not before one of them had died of suffocation. Meanwhile the mob went inside and torched the place.

In January 2013, police raided a printing press, owned by an Ahmadi in Lahore, and confiscated what they called ‘objectionable’ literature. In April 2013, in Lahore again police raided a printing press in Lahore and arrested the printer of the Daily Al-Fazal under anti-Ahmadi and anti-terrorism laws. In May 2013, another weekly Lahore was stopped from publication because one of the editors was of Ahmadi faith. Recently, the Punjab government has issued orders to ban an Ahmadi women’s magazine.

"Every state should allow propagation of faith. That is what the religious freedom is all about," says UK-based Dr Iqtidar Cheema, a consultant at the United States Commission for International Religious Freedom. "Muslims do not have to agree with the Ahmadi theology or their core believes but they shouldn’t be persecuted. Ensuring religious pluralism is the duty of every state. I think the famous approach ‘I do not agree with what you say but I will defend to death your right to say it’ should be the guiding principle in this situation".

According to him, the biggest challenge facing Pakistanis is their indoctrination that took place in the 1980s; "it moved them away from the guiding principles of the country’s founders".

The second challenge, he says, is that the political elite cannot dare to challenge the popular public view. The third one is that the people are not aware of the core traditions of their own faith. "They should be told about examples from Prophet’s life who laid down the foundations of a pluralistic society in Madina. We must first debate about these things."

In the shadow of society