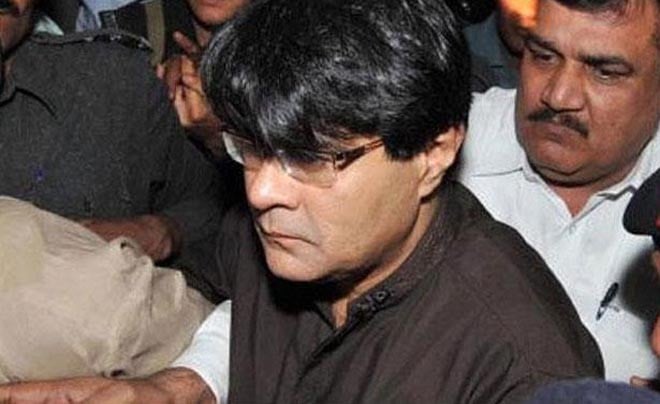 An important character of Pakistan’s mega currency scandal, Javed Khanani, mysteriously died in the first week of December in Karachi. According to news reports, on December 4, Javed Khanani fell down from the 8th floor of an under-construction building located in Bahadurabad area of Karachi’s District East.

Initially, the police claimed it was a case of suicide and that’s how most of the media houses reported it. The family members of the deceased took away the dead body from the hospital without allowing an autopsy, providing an excuse to the police from ascertaining the real cause of the death.

Javed Khanani’s name appeared in the media back in October 2008 when the State Bank of Pakistan (SBP) lodged a complaint with the Federal Investigation Agency (FIA) regarding transfer of huge sums of money inside and outside Pakistan. The FIA initiated an enquiry 118/2008 against Khanani & Kalia International (KKI). It was revealed during the course of investigation that the staff of KKI, various banks, exchange companies, money changers, businessmen and private parties were allegedly thickly involved in money laundering via hawala.

Raids were conducted at the KKI head office at I.I.Chundrigar Road Karachi and other places. Various types of records including computers, laptops, hard drives, DVDs etc. were confiscated. After a forensic examination of these records and devices, it was unearthed that the company established a state of the art data centre in the main office where servers, routers and firewalls were installed.

In the guise of their legitimate business of Exchange Company, Khananis were running a business of hawala.

A report prepared by the FIA states that access was granted to a number of people living inside and outside Pakistan for the data centre with codes and passwords.

Some close friends of Javed Khanani told The News on Sunday (TNS) that he was disturbed about the emerging situation. According to them, Khanani often complained that some departments were continuously harassing him and he (Javed) was also scared of his brother’s (Altaf’s) arrest in the US.

For running their illegal business, the KKI was using the services of Al-Zarooni Exchange located at Naif Road, Dubai. It was also revealed in a FIA report that fake accounts were opened in different banks. During investigation by the agency, large numbers of "Benami" (fake) accounts also appeared. The accounts were opened while using Computersied National identity Card (CNIC) of KKI employees. An official of FIA says that when these staff members were questioned, they disowned those accounts and submitted affidavits that they had nothing to do with the transaction.

As investigation moved further ahead, it was uncovered that these accounts were being operated by the top management of KKI, including Khanani brothers. The FIA officials got hold of records of sending money in and out from the country. The FIA documents divulged that 73,066 transactions were made from February 10, 2007 to November 7, 2008. During this period of 21 months, Rs92.41 billion were transferred from Pakistan to various countries. Whereas, from July 18, 2005 to November 6, 2008, the number of transactions made were 1,468,151. A huge amount of money was funneled inside Pakistan to the tune of Rs1.384 trillion, according to FIA.

The federal agency officials were of the view that the wealth that was transferred outside the country was earned with corruption; besides the business community was using this channel for duty and tax evasion. Moreover, the same channel was used by terrorists organisations, drug and weapon traffickers to pump money inside Pakistan, they said.

FIA registered three cases but different charge sheets were submitted against Javed Khanani and Manaf Kalia (a partner of Khanani brothers). These cases were lodged in Karachi, Lahore and Islamabad. The hearings of these cases were held in Sessions Courts, Banking Court and Foreign Exchange Regulatory (FER) tribunal. Both the accused were mysteriously acquitted in all three cases during March 2011.

On November 12, 2015, Altaf Khanani and Dubai-based Al-Zarooni Exchange were declared Money Laundering Organisations (MLOs) by the US Department of Treasury.

The twin brother of Javed Khanani, Altaf Khanani was arrested by the Miami’s Drug Enforcement Administration (DEA) of the US on September 11, 2015. His apprehension was a result of a sting operation. Altaf was accused of laundering money for Lashkar-e-Taiba, Dawood Ibrahim, al-Qaeda, and Jaish-e-Mohammed.

Initially, the Department of Treasury froze all the accounts of Khanani and Al-Zarooni across the United States. On October 27, 2016, Altaf Khanani pleaded guilty before a court of the United States. He was awarded 20 years in prison and a fine of $250,000.

Prior to this development, on October 11, 2016, the US Department of Treasury issued a fresh list while sanctioning individual and entities as member of the Altaf Khanani Money Laundering Organisation. All were relatives of Altaf Khanani, including his brother Javed Khanani. According to the US Treasury Department press release, "Javed Khanani, the brother of Altaf Khanani, has been heavily involved in laundering criminal proceeds via money service businesses, including Al Zarooni Exchange, for or on behalf of the Khanani MLO. Javed Khanani has also been involved in the Khanani MLO operations in Pakistan."

Some close friends of Javed Khanani told The News on Sunday (TNS) that he was disturbed about the emerging situation. According to them, Khanani often complained that some departments were continuously harassing him and he (Javed) was also scared of his brother’s (Altaf’s) arrest in the US. The recent development did not allow him to travel abroad.

After this incident on December 4, the family has avoided lodging an FIR and barred the police from autopsy. While talking to TNS, the Superintendent Police (SP) of Gulshan-e-Iqbal, Dr Fahad Ahmed said, "the family of the deceased is not willing to pursue the case and they have given a written statement as well".

The family of Javed Khanani is tight-lipped and not willing to talk to the media. It appears the death of Javed Khanani has buried a key chapter of the KKI scandal which once shook the Forex market of Pakistan.