From Yahya to Bhutto 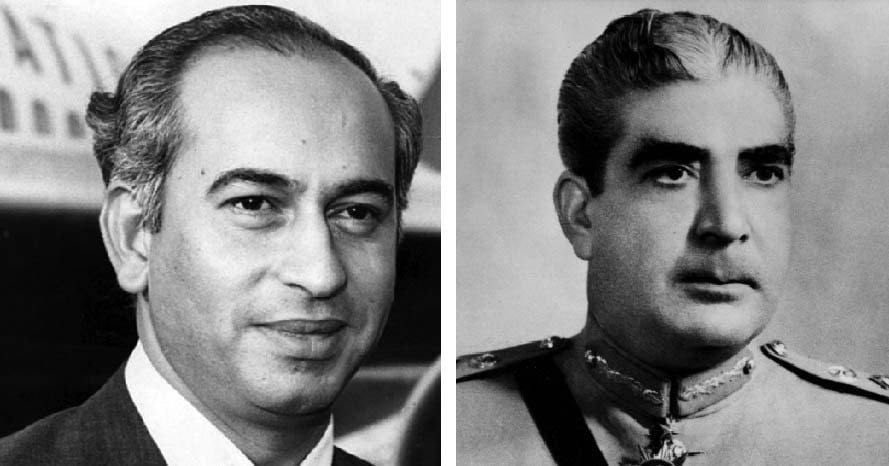 Events that unnerved President General Yahya Khan resulting in his hurried resignation from the position of President of Pakistan, Chief Martial Law Administrator and Army Chief on December 17, 1971, were reportedly directed by none other than the Chief of General Staff in GHQ, General Gul Hassan. However, shrouds of secrecy still continue to cover the true identity of persons, other than Gul Hassan, who conceived the story and deftly wrote the forceful text of various acts that compelled General Yahya Khan to bow out without creating more fuss.

Persons privy to events leading to Yahya’s ouster believe that General Yahya’s successor and Pakistan’s only civilian Chief Martial Law Administrator, Zulfikar Ali Bhutto, was the mastermind who infused General Gul with the idea to accomplish this task. The play was staged at two locales -- the President’s House in Rawalpindi and the Artillery Headquarters 6 Armoured Division, Sialkot.

On December 16, 1971, Martial Law Administrator Zone-B and Commander Eastern Command, Lt. General A.A.K. Niazi signed the Instrument of Surrender in Dhaka. The loss of the country’s more populous eastern wing and over 90,000 prisoners of war (PoWs) coupled with chunks of West Pakistani territory stretching over nearly 5,000 square kilometers had created extreme anguish among the masses, who held General Yahya and his coterie responsible for the debacle and the trauma.

Unlike the 1965 war, there was no way that the public could be pacified and persuaded to accept the outcome of East Pakistan’s debacle as some kind of a victory. The time was, therefore, most opportune for the ouster of General Yahya and his close associates. However, during those days Yahya was seized with efforts to consolidate his hold over West Pakistan and continue to rule as head of state with the help and assistance of pliable civilians. But, the time and also the public mood were not conducive for Yahya’s hanging to power anymore.

Unlike the 1965 war, there was no way that the public could be pacified and persuaded to accept the outcome of East Pakistan’s debacle as some kind of a victory.

On the evening of December 17, 1971, President Yahya, according to Ambassador Arshad Sami Khan, sat with General Hameed, General Peerzada and the Naval Chief "discussing the building up of public wrath against his acceptance of ceasefire" when Gen. Gul Hassan came in rushing and asked to see the president urgently. Soon after Gen. Gul was shown in, President Yahya called his ADC Arshad Sami on the intercom, saying Gen. Gul would like to speak to either Brigadier Farrukh Bakht Ali (popularly known as F.B. Ali), Commander Artillery 6 Armoured Division, or to Col. Aleem-ud-Din Afridi from the same sector in case F.B. Ali was not available. Simultaneously, he asked for Air Marshal Rahim Khan to come immediately.

Regarded as a highly consummate professional and a firebrand, Brigadier F.B. Ali, wittingly or unwittingly, played a major role in the drama that led to Yahya’s final ouster. Soon after Pakistan-India ceasefire, writes Ambassador Arshad Sami in his book ‘Three Presidents And An Aide: Life, Power and Politics,’ Brigadier Ali called the Commanding Officer of 44 SP (Self-Propelled) Field Regiment Artillery, Lt. Col. Ikramullah Raja and asked him to send 30 armed men with Battery Commander Major Arshad Saleem in two 2½ ton trucks. As Major Arshad, along with some colleagues, had gone to Sialkot to see a movie, Col. Ikram told Brigadier Ali that he could instead send the men under the command of Major Munawar. When these men reached F.B. Ali, he ordered them to surround 6 Armoured Divisional Headquarters, where Major General Bachu Karim was the General Officer Commanding. F.B. Ali was said to be very upset with his senior colleague for his cowardice during war. However, before Ali’s orders could be implemented, the matter reached the high command that intervened in time and stopped the action.

When Air Marshal Rahim Khan arrived at the President’s House in Rawalpindi, he was ushered in to the room where President General Yahya was holding meeting with his close associates. At that time, General Gul Hassan was briefing President Yahya and his associates "on some sort of a revolt in Pakistan Army." When General Gul paused, President General Yahya inquired from his ADC, Arshad Sami Khan, about the telephone call to Brigadier F.B. Ali or Col. Aleem Afridi, saying that the calls were urgent. Arshad Sami reminded the operator and pushed him to hurry it up. A few minutes later, according to Arshad Sami, Yahya inquired after the calls yet again.

Since there was great urgency in Yahya’s voice, ADC Arshad Sami shouted at the operator over the delay. The operator reverted back with the reply that he had been trying through the army telephone-exchange but what the operator at the exchange had told him better be heard by Arshad Sami directly. Then he connected Arshad Sami to army telephone exchange operator, who said: "Sir, the Brigade telephone-operator has told me that the Brigade has revolted over the loss of East Pakistan and is on its way to Rawalpindi to attack the Presidency."

When President Yahya pressed for the calls again, Arshad Sami reverted to the operators, only to be told that the Brigade telephone-operator had refused to speak and had since then stopped responding to them as well. Left with no option, ADC Arshad Sami informed President Yahya of what he had just heard. According to Arshad Sami, to his amazement, Yahya did not appear surprised. Instead he called Arshad Sami to the meeting room and asked him to repeat what he had heard from the operators. Upon Sami’s reiteration of what he had heard, Yahya simply said: "Gentlemen, the game is over. Since revolt by the Brigade stands more or less confirmed, it must be contained through the measures we have just discussed."

Yahya’s only concern appeared to be protection of the Presidency. There was a difference of opinion between General Gul and Vice Chief of the Army General Hameed. While Gul insisted that the terms of ultimatum by the revolting Brigade should be met to nip the rebellion in the bud as otherwise it could engulf the entire armed forces; Hameed underlined that victory and defeat was natural processes of any war; that history spoke of defeated armies regrouping and fighting back with greater zeal, spirit and discipline rather than rebelling against its commanders. Hameed proposed that Gul and some of the other generals, like Mitha, should immediately drive up to the Brigade, meet its officers and knock some sense into their heads, and ask them to back-off.

President Yahya, who was quietly listening to the discussion between Hameed and Gul, said that under normal circumstances he would have taken the course that was being suggested by General Hameed and met the revolt with an iron hand, but this was a different situation. He gave his decision that he would step down in favour of a civilian set-up.

Earlier, General Gul had enlisted Air Marshal Rahim Khan’s support for his plan to install Zulfikar Ali Bhutto at the helm of affairs when there is a call to bring in a civilian set-up after East Pakistan’s fall, saying that ‘would satisfy the dissenting public and defiant armed forces against its incompetent generals.’ When Air Marshal asked Gul as to what Bhutto could give them in return for bringing him to the helm of affairs, he (Gul) said: "Elevation to head the Army as its Commander-in-Chief (C-in-C) for Gul and for Rahim Khan to continue as C-in-C of the PAF."

From Yahya to Bhutto