On the role of music in expression of religious sentiments 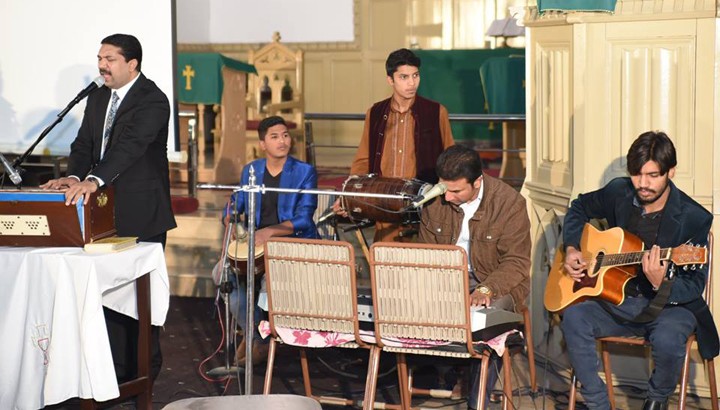 With the onset of the Christmas festivities, services will be held all over the country with music playing a major role in expressing religious sentiments of worshippers.

Music has been an integral part of the Church’s religious rituals and some of the greatest musicians in the European tradition have been associated with the Church. The Bach family, probably the largest bunch of geniuses found in one biological group, revolutionised not only church music but western music on the whole.

This music was transplanted to other regions and continents with the expansion of Christian belief, and this was given a true fillip with the European imperialistic expansion in the post-Renaissance centuries. In the Indian subcontinent, the earliest Christians may have been adherents of Saint Thomas but the more popular remnant of church music has been the harmonium brought over by the Jesuit priests as a portable instrument used in singing hymns and thus popularising the message of Christ in their proselytising missions as far back as the seventeenth century.

As the Hindus have their pandits -- and on a less formal level -- the bhagtis, the Sikhs have the rababis and the imperial court had its kalawants and miralams, the shrines in the subcontinent their practitioner of sama -- the qawwals. Christianity too produced its set of specialised performers (hereditary in most cases) who dedicated their lives to the cause of music in relation to the church. The more exceptional among them branched out and served the cause of music in general and made a name for themselves primarily as musicians and vocalists rather than as minstrels of the church. There have been families of musicians who have thrown up talent like Salim Raza, S.B John, Irene Parveen and A. Nayyar to sing across the board and aesthetically uplift the people with the level of their musical performance.

The most significant aspect of church music in the Indian subcontinent, as indeed in other parts of the world, is that the music was deeply influenced by the local musical traditions and forms. Over a period of time, the religious practices through music were carried out in local forms as well as languages all over the subcontinent. Actually, the local languages and musical traditions totally transformed the musical intonation: If it was in Telugu it had its intonation and lyrics; in Bengal, a similar transformation took place and in the Punjab lyrics were written in Punjabi and composed in local raags and melodic structures retaining the local intonation.

The church wanted to communicate with the people and it was easier to translate the message -- both in local language and local melodic forms.

In Pakistan, it appears that the musical expression supported by institutions has not only survived but has been able to maintain its distinct ang. The other forms in the process of radical change are coagulating as part of a globalised musical expression that defies national or regional moorings. Here, the qawwals due to their organic link with the shrine have had a certain sense of security and a confidence that they have a ready audience; similarly, musicians associated with the church too follow the same pattern and find themselves being trained by their elders. Thus, they too, have a secure place due to the rituals in the religious service of the church.

Majority of the songs are in Urdu, Punjabi, Sindhi, Pashto and instruments used are tabla, dholak, flute and sitar. Dr I.D. Shahbaz, in the beginning of the twentieth century, translated the psalms in Punjabi and sought the help of local musicians to compose them. The main raags used were bilawal, aimen, bhairon, bageshri and bairaveen, and taals used were keharva, dadra and mughlai. Pastor Serosh wrote and composed five hundred Urdu and Punjabi songs that are very popular and even sung today. Ernest Edwin Mall and Master Feroze, (a shagird of Master Sadiq) too made significant contributions and were good in their musical skills.

The church wanted to communicate with the people and it was easier to translate the message -- both in local language and local melodic forms. The purpose of the church was not to alter the taste of the people or to take it a notch above the existing level but to convey the message. Even after the colonial period, two types of services were conducted -- the English-speaking followed by the local vernacular. It never became an issue but a system was worked out to cater to different types of people who attended the services in the church.

The earliest groups of musicians influenced by Elvis Presley and the Beatles too were formed in Karachi mostly by the Goanese Christians who sang cover songs in the various clubs and restaurants of the city in the late 1950s and 1960s. Some of them migrated to western countries like Canada where reputedly they pursued their musical passion. Gradually, over the years, they were heard of less and less and merged with the crowd while their ties to their home country either weakened or snapped altogether.

A group of specialist musicians grew up or developed that was proficient in both musical systems or had at least more than a passing acquaintance with the other, and thus was actively involved in bringing about a synthesis between the two musical systems. The specialist musicians did play a role outside the church especially in the areas of music necessitated by film music.

The demand of orchestration and greater synchronisation allowed these musicians and vocalists to make a healthy inroad. Many of these vocalists and musicians are remembered fondly for their many popular numbers.