Can theatre be salvaged in Pakistan?

The stage is where an individual’s cultural journey begins but how will its crumbling infrastructure get back on its feet in Pakistan? 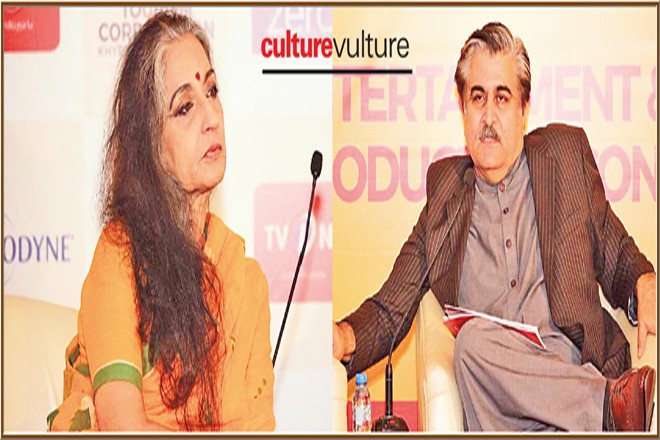 "I want to be known as a theatre writer and director but there’s no place for me as one; I am known as an actress instead," Yasra Rizvi exclaimed in a session on theatre at the first FocusPK conference, held in Karachi last week. She moved to Karachi from Lahore a few years ago with the desire to make her play, Diary, but it couldn’t materialize due to lack of spaces for theatrical performances in the city. Needless to say there were numerous other obstacles that also came in her way.

In a landscape where art and literature have struggled for visibility, does theatre really have a chance to thrive in Pakistan? This and related issues were discussed in a session dedicated to theatre. With Khalid Anum as moderator, the panel featured some accomplished and notable names in the field: Sheema Kermani, Jamal Shah, Salman Shahid, Zain Ahmed, Yasra Rizvi and Zahid Ahmed. Nida Butt’s name was on the program but she was not present on the panel, for some reason. It would have been insightful to hear her views on the subject.

So, while the history of theatre dates back to the 4th century B.C. and continues to evolve across the globe, it still struggles in our part of the world. The discussion opened to ‘why’?

"When theatre graduates come out of universities, they need a lot of support," Zain Ahmed (NAPA) reflected on the difficulties that young artists face. "We had Punjabi commercial theatre in the ’80s but due to financial pressures, it died down and the quality work couldn’t be sustained."

To cater to the financial needs of artists, it is essential that the government supports them, activist, theatre director and dance guru Sheema Kermani echoed the sentiment. "It’s the responsibility of the state to promote art and culture," she said. "All forms of art - be it theatre, dance or music - are important for every society and for that, sponsors and grants are important."

However, she also felt that if the government is not willing to support the cause, one should look for other means of financial assistance. "You can generate funds by collaborating with different companies for the promotion of their products," Kermani, who has an experience of over 40 years in theatre, maintained. "Theatre is a means of education as well and you can talk about several issues (family planning, health and social issues) while promoting their products. I clearly say no to product placement on stage but it can be done in subtle ways."

While the need for sponsors and grants remains an important concern for artists, there is another significant aspect associated with theatre related to the audience. In this fast paced era of the internet, does the average individual have the time and patience to sit through a two-hour stage play?

"A simple law needs to be passed that every child needs to attend a live play, drama, dance performance every year," Imran Aslam asserted on another panel discussion; a point most relative to this topic as well, as it was on the stage that a sense of culture and liberalism was inculcated in the youth. But sadly this was not the case in Pakistan.

On one end there are Anwar Maqsood plays that run for over three months, each in Karachi, Lahore and Islamabad, and are performed to packed halls despite a hefty ticket price. It can easily be said that Anwar Maqsood’s experience plays a part in their success, as does the fact that they play with satire on the current political scenario. They are relatable and therefore interesting to our highly politicized population. But not all plays are this successful; most of them go unnoticed and don’t make much money. What needs to be done?

"It is important to produce discerning theatre audience," Jamal Shah, who has been working to promote arts and culture for several years, asserted. "This will lead to quality work as well as support from the state. Theatre is an important means of communication; it’s a potent and vocal medium that does have commercial viability. We always talk about the ‘soft image’ of the country; I feel we should talk of the ‘real image’ instead which is full of arts and culture."

This led to a discussion on the possible solutions that can help promote the culture of theatre in Pakistan. To make it a part of mainstream entertainment (such as TV, films and music), it is essential to take some important steps in the right direction.

"There should be some smaller spaces where one can have a setup for such performances instead of one big space which isn’t always a feasible option for everyone," Yasra Rizvi asserted. "There could be an entire movement for this."

Zain Ahmed, on the other hand, emphasized the need to provide available spaces (Karachi Arts Council, NAPA) free of cost and share the revenue instead, something they - the NAPA people - plan to offer to young and aspiring theatre artists.

"NAPA isn’t a rental space like Arts Council," he informed. "We don’t plan to charge anything for the hall but instead take 20 per cent of the revenue from ticket sales to recover electricity and other costs. Right now this offer is for students but we wish to extend it to young artists too, along with offering small grants. This revenue-sharing-model is a great way to support the cause and I believe the Arts Council should also do that."

He also stated that the idea behind putting up various festivals, such as the Young Directors’ Festival and NAPA International Festival, would also provide a platform to artists who want to present their work to a wider audience.

This was the beginning of a discussion integral to the rehabilitation of theatre in Pakistan. One hopes that this talking point will lead to concrete measures and something will actually be done for a space that defines the cultural evolution of any nation: the stage.

Can theatre be salvaged in Pakistan?