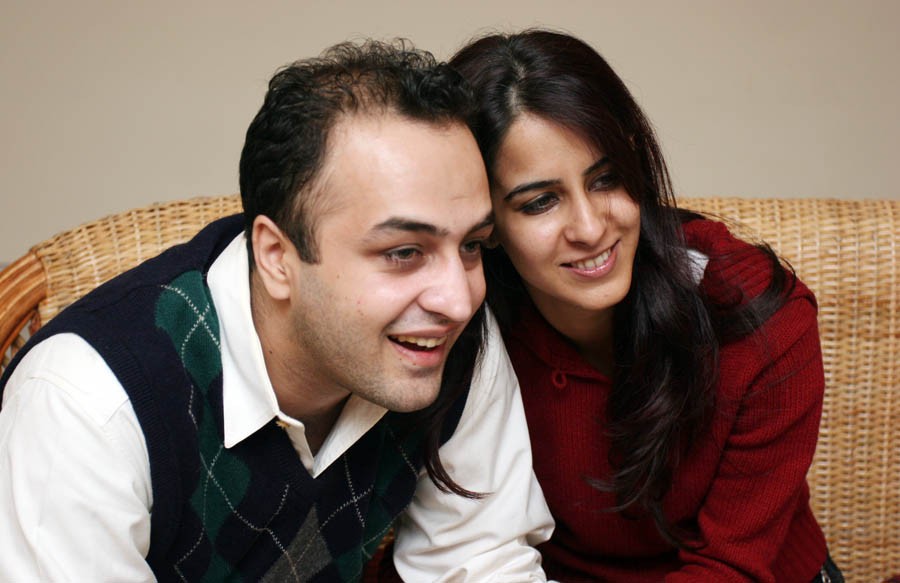 Fahd was tall, I never asked him how tall, and he was well-built and good-looking. To go with that brawn was a very sharp, active mind that gave him an interest in everything around him. He was an electronics engineer and also had some sort of qualification in finance. Our extended family met him when my niece Maria and he were interns with a bank back in 2003 or thereabouts. (Or, were they already working as bank officers?)

Fahd was the kind of person you would immediately like. With his ready grin and merry laughter, he was the fun chap always a treat to have around, and he simply grew on you.

He was an upfront man. There was nothing, absolutely nothing, make-believe about him; he was all too genuine. He was among those rare Pakistanis who when he asked a question, waited for the reply to be completed before going on. If he ever asked anything, it was not for the sake of making meaningless small talk; it was always out of actual interest.

When Maria and Fahd met, she and her twin Mariam were single while their older sisters Shazia and Faiza were already married. When the four sisters and their brother Usman happened to be in Lahore, parties were inevitable. We congregated either at our place or at my cousin Tahira’s. Our assemblies were always a riot, with Fahd as the leader of the gang. It was him who gave direction and ‘material’ to the merriment.

Maria and Fahd got married in January 2006. From the very start it was clear that if there was ever a marriage made in heaven it was theirs. The two were just cut out for each other.

As the years went by, this became even clearer. We know how quickly most marriages, especially love unions, go sour. In this case, the bond was clearly growing stronger: Here were two young people deeply involved with each other. Theirs was the truest form of love.

Had John Hartford known Maria and Fahd, I would have said he wrote his blue grass lyrics ‘Gentle on my mind’ for them. But Hartford wrote the song in 1967, years before either of the two was born. He must, therefore, have been a prophet for the song was for so much for them as ‘they fit together walking’.

The man who could fix computers, software or hard, rectify electrical faults (with a blindfold and one hand tied behind his back), who could play a fair guitar himself, talk at length on the music of Julian Bream and Mariusz Goli or on films I did not even know of was no longer with us.

The two did not permit themselves to be stunted by each other’s shadow, however. When they wanted, they could be themselves and they were. Even as they revelled in each other’s company, both gave the other a good degree of freedom. It was pure joy to see them enjoying life together. They were made for each other and they were very much in love. Maria and Fahd were soul mates as no other could ever be.

In 2007, they moved to banking jobs in Dubai. If the bon vivant in Fahd had bided his time because of the not-so-liberal means in Pakistan, his true spirit now came to the fore. Fahd was a lover of the good life, an Epicurean to the core, and Maria matched him every bit with joie de vivre. There was no scrounging of resources to build the plaza back home like most Gulf expatriates do. There was only life to enjoy to the fullest and to enjoy it with fine, cultivated taste. They did just that. They lived well, made friends, partied on weekends, went camping in the desert and their vacations were spent travelling around the world.

Good cars and heavy motorcycles were what Fahd enjoyed. On a visit in November 2013, both asked me what I wished to do after dinner. I said I’d much rather be home reading. The two would don their motorcycle helmets and take off for a spin around the Emirate.

Fahd rode his 800 cc bike the way he drove his big 4×4 car: fast. But having driven with him, I knew he was a very careful driver who knew how to handle his machine.

In December 2015, Shabnam and I were with them in Dubai where Fahd now had a two-seat Porsche. Fine cars no longer mean much to me, so I do not remember what model it was, but if it was a Cayman, it was a beauty.

He had meanwhile disposed of his bike because he did not wish to block so much cash in wheels. Each of the three days we were with them, I asked Fahd to take me for a ride in his speedster and we agreed to make it a postprandial event. But by that time in the evening I was in too mellow a mood to want to leave home.

As they were seeing us off at the airport, I said we had missed the Porsche ride. "Next time, Mamu," said Fahd. "Next visit, the first thing we do is go for a spin in the car."

December was the time of year Maria and Fahd spent in Lahore. With Faiza and Khurram over from Karachi and the other two being stationed here, the gang of eight would be complete and our family party circuit would commence. That was the menu for this month as well.

In the afternoon of November 25, I got a phone call from my cousin Tahira. Tearfully, she told me Fahd had passed away in a motorcycling accident in Dubai. She said he was ‘duning’ and had gone down the sharp edge of a dune. I could not imagine how a man as fit and robust as Fahd could die on a soft sand dune. This could not be true, I protested, because he did not have a motorcycle. Tahira said something, but my mind had gone blank.

Much later, I learned that Fahd had been lent a motorcycle by a friend who was leaving Dubai for a short while. On a Friday, he and two other friends on their bikes and a bunch in a couple of cars were on their way somewhere. He left home early and Maria went back to sleep. At some spot outside Dubai, on a curve littered with loose gravel, Fahd’s motorcycle skidded off the talus and hit the bike next to his. Both hit the ground. Within minutes his mates were at his side, but Fahd was no more. His friend escaped with a fractured leg.

The man whose chuckling laughter gave life to our parties and to whatever company he was in was gone, snatched away from a life he loved so much at just 39 years of age.

The multi-talented man who could fix computers, software or hard, rectify electrical faults (with a blindfold and one hand tied behind his back), who could play a fair guitar himself, talk at length on the music of Julian Bream and Mariusz Goli or on films I did not even know of was no longer with us.

Tahira’s words made no sense to me. How could Fahd die? He who was so full of life had seemed indestructible to me.

Some years ago, my brother Imran told me of an octogenarian couple he met in New York where he worked as a psychologist. He said he was very touched by the tenderness they had for each other. Sixty years of married life and they were still as much in love as they would surely have been the day they first met. Hearing the story, I thought of Maria and Fahd; I knew they would be like that many decades down the line.

At the funeral when I reminded Imran of this story, he said he had recounted it with reference to Maria and Fahd. That was the way everyone who knew them would have seen them.

The man who was so full of life that he seemed indestructible has left us to try and come to grips with this grim reality. It will be a hard thing to do. Right now I cannot get myself to call Fahd the epitome of life. That he was not. Fahd Rasul Butt was life itself.

P.S.: Word from Dubai has it that Fahd’s funeral was attended by some 250 Arabs and over 300 Pakistanis. That is the measure of the spirit of this wonderful young man, his magnetism and how it drew everyone to him.