Since Narendra Modi took full charge of affairs in New Delhi, there has been a distinct decline in relations 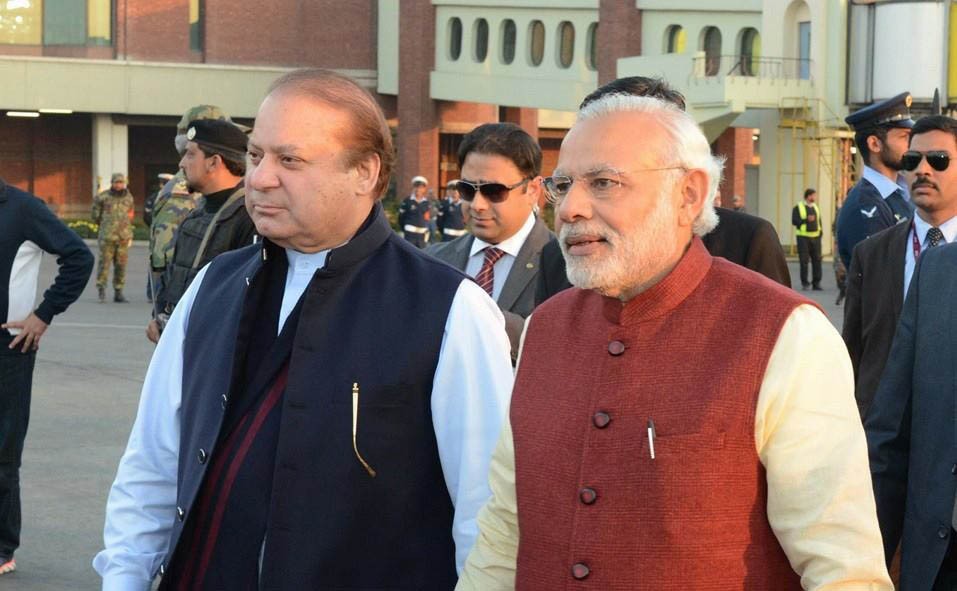 Despite the moments when things have appeared to approach something resembling normalcy, for example as an apparently relaxed Narendra Modi dropped in as a surprise visitor to the wedding of Nawaz Sharif’s grand daughter at Jati Umra, or Sharif attended his inauguration in 2014, the Modi years have proved tough for Pakistan.

With firing continuing across the Line of Control and border villages in the Neelam Valley stricken with fear as inhabitants flee in poorly reported episodes of mayhem caused by aggression, ties have possibly never been as low as they are now since that terrible Siege of Mumbai in 2008.

The initial moves towards talks and building stones to a better future have vanished. Instead, we have had a flurry of incredibly harsh statements from Modi himself and from his ministers, who have openly accused Pakistan of sponsoring terrorism across the border and intervening in Indian-held Kashmir. Of course, this is not entirely incorrect -- as far as allegations go. But it is also correct the Kashmir uprising is essentially an indigenous movement and India sponsors unrest in Pakistan just as Islamabad does.

Since Narendra Modi took full charge of affairs in New Delhi, there has been after an initial period of calm, a distinct decline in relations. The attacks, immediately blamed by New Delhi on Pakistani militants in the Punjab and in Kashmir, have of course provided ammunition to the Indians. But what matters most is the hard-line policies of Modi who had always declared he had little time for Pakistan and saw the disputed territory of Kashmir as an integral part of India.

What was unexpected was that even after assuming the role of prime minister, he would continue with such an undiplomatic approach to the issue.

We always knew that Modi was no friend of Pakistan or of Muslims. As a devout, virtually fanatical, Hindu he has used this as one of his campaign lines. That he has continued the language used during the campaign into office presents enormous challenges.

Most politicians, once in power, taper down their strongest opinions in order to fit in with what is expected of leaders. Modi has not done so and has instead projected himself to draw on board hardliners within India and bring out the very worst in them. What is alarming is that such large sections of the Indian media have joined him in his opinions.

We always knew that Modi was no friend of Pakistan or of Muslims. As a devout, virtually fanatical, Hindu he has used this as one of his campaign lines. That he has continued the language used during the campaign into office presents enormous challenges.

Pakistan so far has been able to find few answers. One of the reasons for this is that too many other states around the world, perhaps more quietly than Modi, agree with his strong assertion that Pakistan is a sponsor of terrorism and terrorist groups. They may not have said so in so many words, but there has been a quite obvious reluctance to counter Modi on this or come to the defence of Pakistan, even from its strongest allies. This immense diplomatic failure from Islamabad should be a cause of concern. Quite regardless of Modi and his rhetoric or bias, we should be looking at ourselves and at our own failures.

But right now, the immediate challenge is to deal with Modi and his cabinet. There are suggestions that inroads could be made. The Indian Minister for External Affairs Sushma Swaraj has in several cases reached out to Pakistanis in distress, notably girls who appealed to her for help after being stranded in India or facing other problems there. Her politics is then quite obviously separate from her personal opinions, and humanity still exists.

Islamabad needs to appeal to this side of the Indian cabinet. It must attempt to neutralise Modi by demonstrating to the world that he is a dangerous influence and that the views he expresses are essentially unacceptable. Our clumsiness in doing so is not a good sign. There should be more global concern about the prevailing situation between the two nuclear-armed neighbours.

The atrocities committed by Indian forces in parts of Kashmir that it controls, including the blinding of children with pellet guns, is naturally a crime that deserves greater condemnation.

Pakistan has not been able to rally wider opinion behind its cause. Even in the country itself, opinion has been voiced in muted tones because the Kashmir jihad has become associated with extremist groups backed by the Pakistani establishment. This has acted simply to undermine the heroic efforts of the Kashmiris who have since the 1990s struggled to voice their own opinion on their own future. The Pakistani interventions have hampered rather than aided them.

We now have a good taste for what the Modi approach is to be like. What is alarming is the possibility that he may win some support from the administration of incoming US President Donald Trump who has in the past suggested India could be a friend while Pakistan needed to be "dealt with".

Of course, it is impossible to predict how Trump will act once in the White House. It is also true that in the global context, some of Modi’s ire has been fired up by Pakistan’s warmth with China and the established of the CPEC as a massive project which will aid the country. But the diplomatic and political reality is that the government in India, which will stay in place for possibly three more years, needs to be handled. It will not be an easy task.

There has been open demonstration of unnecessary venom towards Pakistan, with the deliberate sabotage of the SAARC summit due to have been held in Islamabad just one example of this. There are many others.

The problem is they will continue to come in until a way is found to break through the curtain of hatred drawn around the Indian leadership by its Prime Minister and some process begun to talk matters over.

A third party intermediary will be required to achieve this and to move things past the dangerous point where they stand at the moment with the risk of a trigger leading to wider conflict.