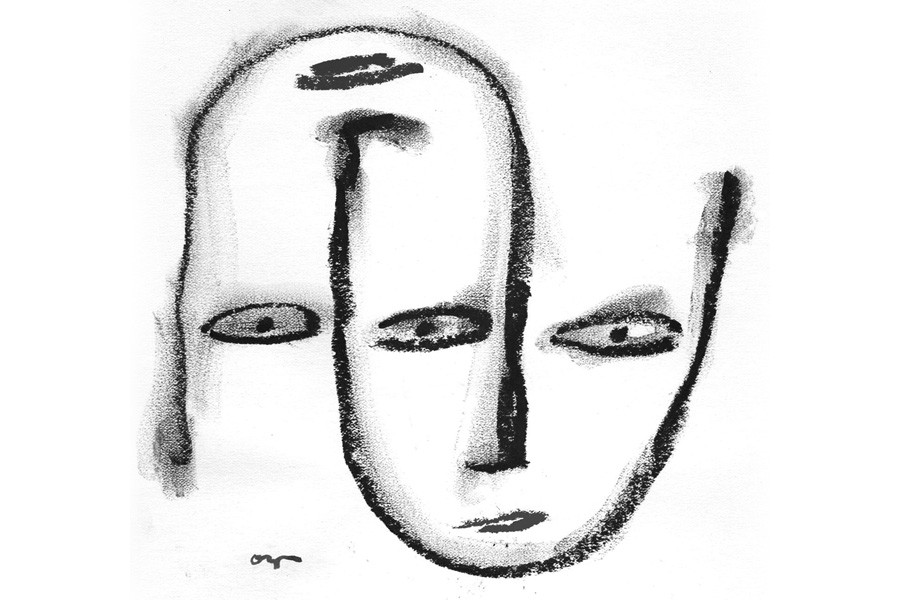 "Sorrows that are not shed in the form of tears often weaken some organ in the body, particularly the mind," says Dr Mohammad Iqbal Afridi, Head of the Department of Psychiatry at Jinnah Post Graduate Medical College (JPMC).

There is a disorder named Somatisation or Somatic Syndrome in which patients complain of pain/nausea/headache but no physical cause is found when they are physically examined.

"A retired national hockey team player of Pakistan was suffering from some mental distress that resulted in severe abdominal pain. It would surface time and again. He went through endoscopy no less than 13 times yet the pain in his abdomen persisted. Because the root cause of the pain was not physical but psychiatric. After being diagnosed properly, he was fine within no time," says Dr Afridi.

Psychiatric issues are a stigma in Pakistan despite the fact that the number of patients is huge. There is no consolidated data of psychiatric patients either.

"One in every three people is suffering from some kind of psychiatric disorder in Pakistan," according to one study conducted by Ilyas Mirza and Rachel Jenkins. Mirza is a consultant psychiatrist at a mental health trust in the UK and principal research scientist with Human Development Research Foundation, Islamabad. Jenkins is a professor at the Institute of Psychiatry, King’s College, London.

Psychiatric diseases like schizophrenia, depression, obsessive-compulsive disorder are the ones that doctors come across most often.

"JPMC caters to 450-500 patients in every OPD which is held twice a week. At times, we receive up to 700 patients. Majority of them belong to underprivileged segments of society. People come here from all over the province," says Dr Afridi.

"One-on-one consultation is very important for the rehabilitation of the patient. Here at JPMC, we are providing consultation and medication for Rs5. We are doing what we can but still a lot needs to be done," says Dr Afridi.

The hospital’s in-patient facility takes up to 30 patients. Upon my last visit, there were 19 males and 4 females admitted in the ward.

"He wants to kill me," shouts Imtiaz who is in his mid-30s. He hails from Sujawal near Thatta district of Sindh province and has been suffering from schizophrenia for almost 20 years. "He had hardly completed 7th grade when this problem started," tells his mother, Sakina.

"Since the beginning, his behaviour was different from others. He would not mingle with other people, often became aggressive, would start talking to himself and do so for a long time and even smile without a reason. When we approached a doctor, Imtiaz was diagnosed with chronic schizophrenia," she says.

His brother is also like him. He was treated in JPMC earlier and his mental health improved. "Before coming to JPMC, Imtiaz he was taken to Giddu Bandar, Hyderabad (a hospital for psychiatric patients) and some other places too but this was all in vain since his health did not improve.

"We are poor people. I don’t know what will happen to him. I borrowed Rs2000 from our neighbour to bring him here this time. The bus fares from Hyderabad to Karachi are quite high, let alone other needs of food, medicine etc. Only Allah almighty will help us," says Sakina.

"We are doing our utmost to cater to the ever-growing population but it is not an easy task. Patients needing psychotherapy are asked to come on Saturdays. For them, we have created a separate space and address each patient according to their needs. For the patients with drug addiction, there are separate cubicles and the same goes for other patients suffering from various psychiatric issues; one-on-one consultation is very important for the rehabilitation of the patient," says Dr Afridi.

"The mentally ill persons are offered yoga classes and are engaged in gardening and plantation as being busy in constructive work is of utmost importance not only to the patients but also to others out there like you and me. Here at JPMC, we are providing consultation and medication for Rs5. We are doing what we can but still a lot needs to be done," says Dr Afridi.

Aftab, 25, also a chronic patient of schizophrenia, is a resident of Karachi. He was admitted in the psychiatric ward at JPMC for at least a week. Hafiza, his wife who is pregnant and expecting their third child says: "We took him to a spiritual healer but it was of no use. Before admitting him in JPMC, he used to work as a vendor and sell salt on a cart but now he is not able to do that."

The conversation was underway when Aftab woke up with a scream and mumbled something that was hard to understand at first. "This hospital is mine," exclaimed Aftab. He was furious.

"Calm down," one of his attendants said pointing towards me, "He is a senior doctor." Hearing this, Aftab became quiet within no time and said: "Pardon me."

"He is very aggressive and makes big claims. He says he can afford to buy anything, even airplanes," says Hafiza.

"Schizophrenia is a disease in which a patient suffers from delusions, exhibits bizarre behaviour and often the treatment has to persist for a long time," says Dr Afridi.

"Mere physical absence of a disease does not signify that a person is healthy. Being healthy means complete well-being of an individual, socially, psychologically, intellectually. We witness road-side quarrels every day and confront daily life stresses. It is when we fail to cope with them properly or are not able to work productively, that is when a person should worry and it is then we consider him or her mentally unfit," he says.

Another of Dr Afridi’s patient was 71-year-old Malik sahab. He was extremely cautious that no one should enter the room when he was talking to the doctor, because he demanded the doctor’s full attention. Malik sahab gets depressed for a particular amount of time on any day; anything may get stuck in his mind and until he gets over it, it keeps bothering him.

"When I heard my child was returning, I started worrying a lot for his safety, many days before his arrival. Sometimes a gigantic task seems small, at other times a petty work seems gigantic," he says.

Dr Afridi tells he is a patient of bi-polar disorder which is why one witnesses many of his mood swings and abrupt talking sprees.

40-year-old Shoaib, who serves tea and runs other small errands at the psychiatry ward, is a success story of rehabilitation. Although he is still on a daily dose of prescribed medication, he is able to do his work properly. He was a patient of conversion personality i.e. hysteria and depression. He was so mentally devastated that at one stage he became partially blind.

When asked what his trigger was, he says: "After the death of my brother, I was expected to marry his widow. Even before this demand was made of me, I was unwell. At times my anger would get out of control, but after my brother’s death I became very ill, so much so that I was about to lose my job. Prior to working at the psychiatry ward I was working in another department at JPMC."

Shoaib stressed on the importance of taking regular prescribed medication to help himself.

There is no dearth of stories at JPMC’s psychiatry ward. I also learnt about a young man who was supposed to go abroad for studies but couldn’t because he began experiencing panic attacks. I came across a dementia patient, a hardware repairer suffering from mental distress and so many others suffering from anxiety disorder, drug addiction, depression, anxiety and somatic disorder.

Talking about the treatment, Dr Afridi says it is pivotal to understand the changes in behaviour and attitude of people who suffer from mental illness as they very often manifest signs of discomfort. They either become overwhelmed without any reason or their performance level decreases or increases in a particular field, or they become indifferent.

"Whatever the symptoms, it is important for parents, peer groups, and teachers to understand that if some change is occurring in the way a person normally behaves and that change persists over time, one should consult a psychiatrist. Delay in medical help, going to fake faith healers or labelling a person will only aggravate the situation and prove detrimental to the patient’s interest," explains Dr Afridi.

He emphasised the need to break the myths and taboos around psychiatric issues. "Most psychiatric diseases are treatable within 6-9 months depending upon the situation. Even if they linger on further like schizophrenia, they can be managed through medication or psychotherapy, just like any other treatable disease."

What we need to do is to be less judgmental about others as often we utter things without knowing the mental condition of a person. That is cruel, devastating and heart breaking for anyone’s mental health, not only for someone who is battling mental health issues.