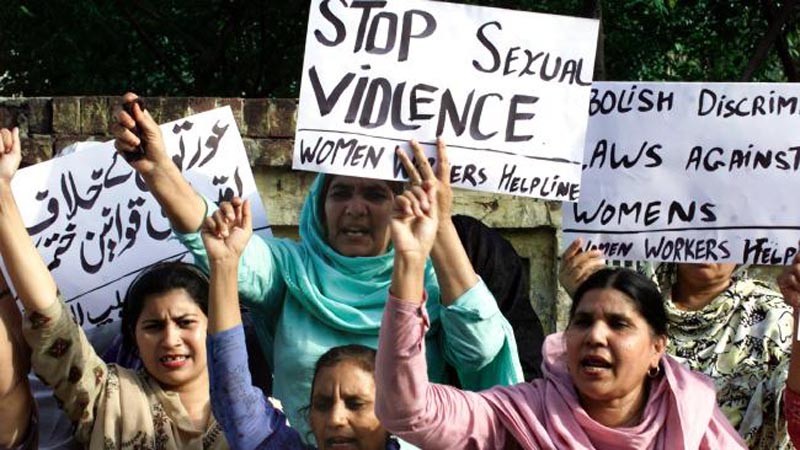 On Wednesday, November 2, 2016, Shareefan Bibi’s eyes were gouged and her limbs cut off by her brothers in Muzaffargarh after they suspected her of kidnapping one of their daughters. This grotesque act of violence against a woman is just one of the many examples of crimes against women reported within this year.

Another violent incident took place a few months ago where a 19 years old, Maria Sadaqat, was tortured and burnt by a group of people in a village near Murree for refusing a marriage proposal from the son of a former colleague.

These incidents serve as a harrowing reminder that violence against women is not a dormant cultural value that occasionally pops out at the hands of deranged minds; rather it is a recurrent phenomenon happening in society to uphold its male-dominant, patriarchal values.

Violence against women exists as part of our social structures and is an intentional pattern of behaviour utilised to establish and maintain power and control over women. In this patriarchal society, those with all the power and privilege -- males -- are taught to resort to violence when their position of dominance is threatened.

This violence infringes upon women’s liberties through a collection of practices that encompass a broad range of socially, financially, emotionally, and physically abusive and coercive acts in order to protect and uphold a value system grounded in women’s subjugation and oppression.

When women challenge male-dominance and its subsequent power arrangements determined by patriarchy they are either violently pushed back into patriarchal boxes or annihilated altogether. However, men do not act in isolation when perpetrating violence rather their violent behaviour is linked to pathological social arrangements perpetuated by patriarchy.

These structural inequalities perpetuating male-dominance render women vulnerable at every end, especially since victim/survivor-blaming is the society’s predominant response to violence against women. Victim/survivor blaming lifts the entire burden from the shoulders of the perpetrator and places it on the woman who experiences patriarchal violence. Moreover, it legitimises the violent behaviour of men, perpetuating the ‘she deserved it’ culture.

Recognition and creation of a discourse of violence against women as a serious social problem, not just as a private or ‘normal’ matter, is what is needed to challenge the patriarchal presumptions that aim to subjugate and oppress women.

The society also reacts by curtailing and restricting women in the face of violence -- rather than focusing on the patriarchal attitudes that condone and allow violence against women.

Nowadays, we see numerous reports about the violence experienced by women, which can lead us to believe that it is more frequent now than it has ever been. It is possible that this is not entirely incorrect. However, we cannot deny that the visibilisation of violence against women has increased over the past few years through increased media reporting.

Despite this increase in reporting, it is still imperative to note that the discourse in the media or in society at large has yet to take a radical shift towards a stance that pushes for the abolishment of the structure of patriarchy to eradicate violence experienced by women. More often than not, reports around women’s lives are dealt with extreme insensitivity, completely negating the inherent danger of violence looming over a woman’s head if she defies patriarchy.

In this case, Qandeel Baloch’s example resonates. No one can deny that her defiance to patriarchal norms made many patriarchs uncomfortable. But things took a physically violent turn when her pictures, videos and name were plastered all over the electronic media, not only disregarding her privacy but also challenging patriarchy to deal with a defiant woman.

Qandeel’s death shook a lot of us feminists to the core. It reminded us of the limited space available to women. It also reminded us of the violent destiny that awaits a woman defying patriarchal norms and traditions. It also brought to the fore an important debate -- it is not enough to have violent crimes against women reported; it is imperative that a feminist paradigm shift not only within the media but also within the overall discourse is expedited.

It is essential that we radically challenge gender stereotypes which subjugate women instead of benefiting or rewarding men at various levels of human and social interaction for coercive controlling and violent behaviour. We need to break our age-old patriarchal injustice where control over a woman’s being is placed in the hands of a man and she is left helpless and unprotected because the institutional structures as well as society are bastions of patriarchy.

Recognition and creation of a discourse of violence against women as a serious social problem, not just as a private or ‘normal’ matter, is what is needed to challenge the patriarchal presumptions that aim to subjugate and oppress women.

We need to realise that no human activity takes place in an ideological vacuum and that is why whenever we wish to look at violence against women analytically, we must focus on male power but via situating that power within the patriarchal order. Our analysis and research needs to keep its gaze directed towards social contexts rather than towards individual men who are motivated to dominate. And only then will we be able to deconstruct violence and radically challenge patriarchy.