The spirit of Faiz

Providing a comprehensive space to authors, artistes and activists, the Faiz International Festival was a better organised and attended event this year 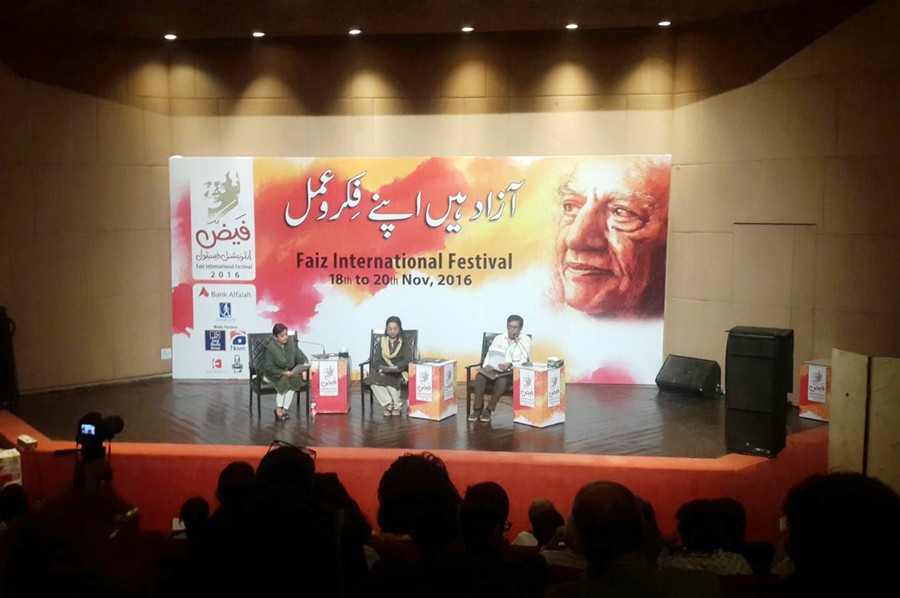 The entertainment-starved city of Lahore eagerly greeted the three-day Faiz International Festival at the Alhamra Arts Council. On Friday evening, throngs of people were seen gathering at the brightly decorated venue. Colourful flags hung around the passageway fluttered against the reluctant winter winds.

Decorated with erudite couplets from Faiz, display stands were scattered all across the place. The main ground, sporting a proud Iqbal sculpture, was crowded by voracious readers and bibliophiles, moving from one book stall to another.

The staircase outside the Hall 2 created a rather informal stage for amateur musicians and performers. Groups of young people playing Bollywood songs on their guitars could also be spotted lurking in dark corners around the venue halls.

Unlike the other gilt-edged literary festivals in town, the Faiz International Festival didn’t only appeal to a westernised-elite audience. Many of the sessions were conducted in Urdu. Apart from providing a comprehensive space to the finest, prolific authors, poets and intellectuals, the festival also entertained young struggling artistes and activists.

There were the promised exclusive sessions on literary and artistic greats like Intizar Husain, Sibte Hasan, Ahmed Nadeem Qasmi, Shakir Ali and Javeed Iqbal. Though, admittedly, this was made possible because there were no Indian literati and artistes to grace the festival. The current tense relations and the strict India-Pakistan visa regime came down heavy on the normal regular exchange of artistes at such literary events.

While most of the sessions were relevant to literature, poetry and politics, some like the ones with Fawad Khan and Mahira Khan were meant to be attract audiences, and pull the crowds they did.

There were the promised exclusive sessions on literary and artistic greats like Intizar Husain, Sibte Hasan, Ahmed Nadeem Qasmi, Shakir Ali and Javeed Iqbal. Though, admittedly, this was made possible because there were no Indian literati and artistes to grace the festival.

A session titled ‘Portrayal of Women in TV and Film’ moderated by Navid Shehzad welcomed on the stage illustrious, eminent actors of the likes of Samina Peerzada, Samiya Mumtaz and Simi Raheel. The discussion examined the issues of on-screen representation of female characters. Shehzad said that on small and large screens, women characters, function either to serve the male lead or are just there as a token presence. Female roles have been boxed in to traditional gender stereotypes that portray women as economically and emotionally inferior.

Raheel said people have always been confused between sex and gender. The mainstream cultural assumptions about women’s social roles and power get translated into the media and, hence, we see devalued characters of women on-screen. Talking about her own experience, she said "Throughout my career as an actor, I have never accepted any role that has been damaging to the women in general."

Peerzada was a strong presence during the session. She drew the audience’s attention to the changing dynamics of the TV industry where the directors and the producers don’t have the kind of creative freedom they once possessed. "It is all about the channel owners these days. Revenue generation has become more important than actual content. The distributors who bring in advertisements are now the deciding factors about what the story should be like, what the audiences would like to watch and what women roles should be essayed on screen."

Mumtaz spoke about the media’s objectification of women and how it perpetuates stereotypes about the social attitudes of men and women in real life. She said she has observed scripts written by women screenwriters such as Faiza Iftikhar and Umera Ahmed portray women in a more negative light compared to those written by men. "The characters they write are unreal. One faces difficult performing those artificial roles. They try to portray desexualised, morally apt characters that don’t exist in real life."

Shehzad, concluded the session on the note that the minimal female leading roles, victimisation and negative representation of women on screen all boils down to patriarchy. She stated that it was Muneeza Hashmi whose efforts resulted in the ban on violence against women on Pakistan Television. What she would like to see is how the public reacts after a woman is slapped on screen, pointing to the lack of a women’s collective movement in the country.

As mentioned before, this year’s Faiz festival was without its share of Indian guests, including the ever-present Naseeruddin Shah. And yet they could not ban Indian content. So the morning of Day Three began with the dramatic reading of two short stories, ‘Ghoongat’ by Ismat Chughtai and ‘Nazzara Darmiyan Hai’ by Qurattulain Hyder, bringing the locale from across the border to life on the stage of Lahore.

Organised by Zambeel, these stories have been dramatically read in Karachi many times but they were new to the Lahore audience. It was not just a welcome break from the usual panel-discussion format, the stories came alive by superb reading by Mahvash Mumtaz, Asma Mundrawalla and Mohammed Ehteshamuddin. Those who had seen Naseeruddin Shah give a magical performance of Chughtai’s stories on Alhamra’s stage, despite minimal props, weren’t sure if it was possible to just sit on regular chairs, with a paper in hand, and have the story read out to them and manage the same mesmerising effect. Lahore saw it happen and wants more of it.

Zambeel did take care of some background sounds, designed by Asma Mundrawalla. So Ustad Bismillah’s shehnai played as an apt backdrop for ‘Ghoongat’ while there was a wide array of sounds for ‘Nazzara..’ culminating in the most effective Kaaga Sub Tan Khaiyo sung by none other than Musadiq Sanwal.

There seemed a lot of interest in the session ‘A conversation with Cuban poet Alex Fleites’ before the festival, because of Faiz’s connection with Cuba, but only a small crowd managed to make it to Hall 3 on Sunday morning.

Munizae Jahangir introduced the poet, his past life, his career as a journalist in Cuba, and talked about freedoms under Castro and culture. This was followed by a reading of his poems first in Spanish and then an English translation.

The floor was then opened for questions and a translator tried to convey his thoughts to the audience and vice versa.

Fleites went on to say that poets know how to express themselves, without being censored. "They could not restrict poetry before and they can’t now. Of course we can never have enough of freedom; there is always less of it, just like love, we want more of it."

Replying to another question, he said it is not possible to translate poetry. "I am satisfied with the translation when I think the basic meaning has been delivered. But many details such as the music and the complicated relationship of words are lost. There are some great poets like Shakespeare and Dante but I can never say they influenced me because I never read them in the original."

Poetry, he said, is not a genre; it only makes use of genres. "It’s something to satiate the soul, just as we are dependent on our blood. When I was young, I found out the daily verbal expression was insufficient for me, I couldn’t express myself fully. My father was a keen reader of poetry. He used to read poetry with me; he would lie down and read it. I would put my ear against his chest and thus hear the words.

"We don’t write poetry when we are happy or satisfied with our lives. We only write it when there is a sense of loss, we desire something. That is why I say that poetry that celebrates and depicts happiness is no poetry."

A session "Politics, Activism and the Way Forward" brought together leading political figures from across the country for a heated debate on the current socio-political scenario in the country. Seated on the stage were Hasil Bizenjo (National Party), Abid Hasan Minto (Awami Workers Party), Aitzaz Ahsan (Pakistan Peoples Party), Afrasaib Khattak (Awami National Party), Shafqat Mahmood (Pakistan Tehreek-e-Insaaf) and Salman Rafiq (Pakistan Muslim League-Nawaz). The session moderator Mahtab Akbar Rashdi posed a question to the panel regarding the most critical issue of Pakistan in the current times.

Ahsan was of the view that divisions and fault lines in Pakistan are damaging for the society. "People have become devoid of any sense of shame and outrage as a nation on the news being circulated on poverty, inequality and violence. Unfortunately, we have become conditioned to these issues."

He added saying that half of our population of women is a problem for us and the remaining half is busy discoursing about imposing restrictions on them. He pointed out that Pakistan was never created as an Islamic state but as a state for Muslims. Mentioning the speech of Mohammad Ali Jinnah at the constituent assembly of Pakistan, he said had Jinnah been alive when the constitution was drafted, it would have been Jogendra Nath Mandal, a Hindu, writing it.

Minto claimed that in the last one year since the first edition of Faiz Festival we haven’t progressed at all. "Feudalism is the main hindrance in the country as it has attached a large segment of our society to outdated laws."

Khattak asserted that we have two power houses in the country, the civilian leadership running the country from the parliament and the military leadership ruling the country from GHQ. He said that we the people in Punjab are crying for Kashmir and Gaza but have their mouths sealed over the atrocities being committed in Sindh and Balochistan. He then recited Habib Jalib’s couplet ‘Balochistan jalta hai tau, Pakistan jalta hai’.

Bizenjo said the state has been responsible for promoting fanatic elements in the country:  "Taliban were created by the state".

At the end of Day Three, floods of people were seen marching towards Hall 1. A huge crowd had gathered outside to get a glimpse of Abida Parveen, as they did a day before for Tina Sani. The two-day festival culminated with a rejuvenating performance by the magnificent folk singer which saw a jam-packed hall craving for more.

The spirit of Faiz