The Western and Chinese blocs differ on three crucial elements of the existing international order: trade, international finance, and development 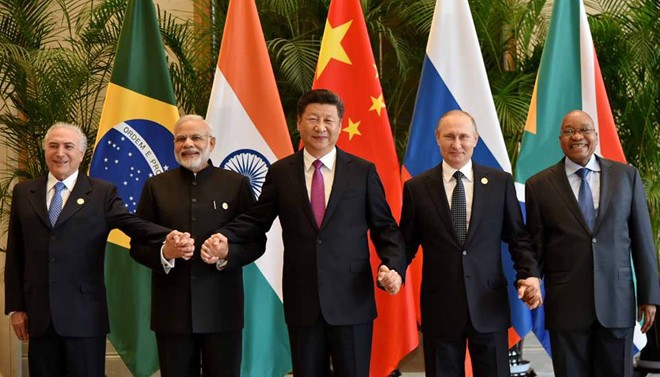 As Western notions of globalisation stand challenged by popular movements across the globe, a new economic order is taking shape. Three decades of economic and technological changes are driving unprecedented shifts in the world economy.

The effectiveness and legitimacy of the global economic architecture carved during the twentieth century has been questioned and, some would argue, stands discredited. The old architecture manifested through the multilateral institutions, such as the World Bank, the International Monetary Fund (IMF), and the World Trade Organization (WTO), is strained.

This change within the international economic system in part has to do with the inherent instability and flaws of neo-liberalism that assumed ascendancy towards the end of the last century.

The Bretton Woods system, which emerged from the debris of World War II, became the key instrument of Western control over the international politics and economics. Global economic governance was mediated through multilateral economic and financial institutions, political and regional organisations.

The global infrastructure attempted to advance Western economic and security interests first in the Cold War and later in the uni-polar world ruled by the United States. The IMF was to be led by a European and the World Bank by an American nominee; and the regional banks covering Asia, Africa, and Latin America accepted these power relations and worked within the ambit of Bretton Woods System.

For 45 years after World War II, the two super powers -- the US and the USSR defined global politics. The end of Cold War began a new era of US hegemony due to its military prowess as well as economic might. But this was not meant to last long.

Read also: The spectre of terrorism

The spectacular rise of China’s brand of capitalism by the turn of twentieth century has effectively challenged the hegemony by the West, especially the US. The world witnessed 2014 as the last year in which the US could assume the position of world’s largest economy. By 2015, China was the leading power and despite the recent slowdown, it is likely to hold this power for a long time to come.

The decline in the US power can no better be illustrated by the simple fact that during the period China lifted more than 500 million of its citizens out of poverty, America’s middle and working class entered into a phase of serious stagnation.

But Chinese power is only the best-known cause for the change in international economic relations. In the past few decades, the confidence in Bretton Wood institutions greatly diminished due to the financial crises faced by Asia, Eastern Europe, and Latin America during the 1990s and 2000s. The watershed moment was the 2007-08 financial crisis triggered by the unregulated nature of Western capitalism.

After the end of the Cold War, the United States was a unilateral power for at least two decades. But the inordinate leeway it gave to the narrow economic interests of large multi-nationals, including the oversized banks, prevented the creation of a more stable global economic order. The WTO also turned out to be a lopsided arrangement. The world found the US rhetoric on free trade as hollow given how it insisted on subsidising its rich farmers.

The US Treasury, during the East Asia crisis of the 1990s, interrupted the Japanese offer of $100 billion to aid economies in recession. While the US bailed out its own banks in the aftermath of 2008 crisis, it vociferously advocated high interest rates and austerity in East Asian economies.

Read also: The nation state is back

Soon, demands for structural changes were voiced across the globe. The G-20 overtook G-7/8 as the leading consortium through which global economy was to be managed. The G-20 essentially recognised emergence of new economies, which forged bilateral and multilateral free trade agreements, instead of concluding a WTO-led global liberalisation process.

New global institutions have emerged that reflect changes in the global economy and echo the ambitions of new major powers. Led by China, more than 50 nations joined hands to create the Asian Infrastructure and Investment Bank (AIIB), the first multilateral financial institution outside the Bretton Woods system.

Similarly, grouping of BRICS (Brazil, Russia, India, China and South Africa) set up a new development bank aimed at providing funds to global south for infrastructure and development. BRICS represents 40 per cent of the world population, creates 20 per cent of world output, and, most importantly, is leading world’s growth.

China and the United States today are the two poles of global economy. The uni-polar world led by the US has officially given way to a multi-polar international system where China is increasingly asserting its presence. Both powers, however, share the common interest in maintaining a functional and stable international economy. They are also interdependent in economic terms.

China is US’s second-largest trading partner, while the US is a key market for Chinese goods. Despite their strategic competition and the rise of isolationist Donald Trump, this relationship will not undergo much change as both countries and their power corporate interests require cooperation for smooth functioning of the international economy.

How far would this necessity for cooperation last? There are many points of divergence. The Western and Chinese blocs differ on three crucial elements of the existing international order: trade, international finance, and development. Emergence of AIIB has been a source of tension between China and the US, leading Washington to adopt an ambivalent policy towards AIIB. It’s wary of China’s outsized influence in the AIIB governing structure and questions the standards being adopted by AIIB to support infrastructure projects around the world.

On trade, China and the US are pursuing separate but overlapping set of initiatives. Washington has advanced Trans-Pacific Partnership, which excludes China as a regional trade grouping. China has advocated a Regional Comprehensive Economic Partnership that excludes the US. Similarly, China has put forward One Belt, One Road (OBOR) as a project to enhance economic connectivity, regional trade and infrastructure development, linking 65 countries of Euro-Asia.

The US had earlier proposed a New Silk Road initiative to connect Central and South Asian regions through energy markets, regional trade and transport routes. Domestic politics in the US will not allow for a proactive role of the country. China, on the other hand, has already begun work on OBOR and countries, such as Pakistan, most allied allies of the West, are pivotal to this initiative.

There is increased populist demand in the US to bring back the jobs lost to China. However, the economic reality is that Chinese growth matters for the United States and the West. It is not a zero sum game as xenophobic politics makes it out to be.

Increasingly, the West is recognising that shifts in global economic order are being driven by the economies outside the advanced (read Western) world. In future, old and new powers can cooperate, compete and collide. The direction of their domestic policies and trade will determine ultimate shape of the international economic system.

The decline in the US power can no better be illustrated by the simple fact that during the period China lifted more than 500 million of its citizens out of poverty, America’s middle and working class entered into a phase of serious stagnation that has contributed to the rise of Donald Trump and his divisive politics.