Punjabi and the making of ignorance

While this negation of their own identity at the altar of state power and privilege has provided the Punjabis material benefit, it has made them susceptible to extremism 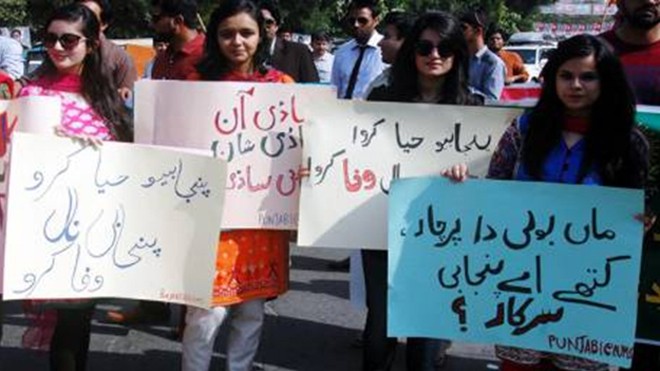 Let us first be clear that teaching in one’s mother tongue is recommended the world over by educationists and linguists. Thus, this article is not about why we need to have Punjabi/Seraiki as part of the curriculum in primary school, but instead about the costs we bear for its exclusion.

When a child has to memorise a new Urdu word for a picture in the class 1 book, rather than enhancing comprehension, it instead confuses the child who has to call the same picture by a different name at home. Thus from the first day in school, the child is under a double burden to have to learn another language before becoming literate.

This methodology is the exact opposite of what Paulo Freire articulated as education for critical consciousness, where education had to relate to the person’s socio-cultural and political environment. It is thus no surprise that the child who began schooling with rote learning will continue the same.

But more importantly, if the child succeeds in learning Urdu to become literate, the superiority of Urdu as the language of education over Punjabi will forever be engraved in the mind.

Though Lahore is very much a Punjabi-speaking city, the language of the people changes to Urdu and then to English along with upward social mobility and perceived sophistication. The upwardly mobile urban middle classes who spoke Urdu with their children in the last generation now speak English. The rural boys in college will speak Punjabi with each other but as soon as a girl comes around, the language changes to Urdu.

Similarly, while Punjabi anchors dominate national prime time TV talk shows which are in Urdu, the only time Punjabi is spoken on tv is for juggat baazi -- the anchor keeps a sophisticated demeanour speaking in Urdu.

Where does this lack of pride come from; such that the Punjabi has been transformed into the language of the uneducated, the coarse and the uncouth in its own land and by its own people? Was it because of the death knell of Punjabi nationalism due to the partition of Punjab?

Where does this lack of pride come from; such that the Punjabi has been transformed into the language of the uneducated, the coarse and the uncouth in its own land and by its own people? Was it because of the death knell of Punjabi nationalism due to the partition of Punjab? Was it that the Pakistani Punjabi Muslims disassociated themselves from Punjabi owing to their religious community’s association with Urdu? Or was it that the Punjabi looked up to the better-educated Urdu speaking mohajir who dominated the civil bureaucracy, and thus the state in early years of Pakistan?

Whatever the reasons, the inferiority complex of the Punjabi is real. Its implications being the double marginalisation of a vast segment of the population including the rural inhabitants and the urban poor, who by their very speech will never be given equal weightage, and thus would require the privileged to speak on their behalf.

Various authors have rightly argued that the denigration of Punjabi language cannot be limited to the question of language itself but encompasses the disregard for Punjabi culture and heritage. While the smaller nationalities of Pakistan have challenged the notion "we are not Sindhi, Baloch, Pakhtun or Punjabi; we are Pakistani" to safeguard their nationalist identity as well as the multinational nature of Pakistan, Punjabis instead have on a large scale adopted the Pakistani identity as dependent on the Islamic identity.

While this negation of own identity at the altar of state power and privilege has provided the Punjabis material benefit, it has made them susceptible to extremism as religion has filled this empty space. A religious identity by itself is not problematic. However, since the Punjabi language and literature is not taught in schools, colleges or universities nor is Punjabi scholarship patronised by the state, the vast majority does not have access to the rich Punjabi intellectual tradition of the Sufis and Bhagtis.

The purpose here is not to belittle the strength of oral tradition but to argue that in current times, the philosophical aspects of tradition will only become popular if it is part of the mainstream educational curriculum and intellectual discourse. For example, books stalls of popular Sindhi writings can be seen in political rallies in Sindh but are unimaginable in Punjab. Instead, the religiously informed identity formation in Punjab has come to be dominated by the religious orthodoxy.

This crisis of identity because of the negation of Punjabi heritage has led to both radicalization as well as alienation, as can be seen in the Al-Bakistan number plates in Lahore.

It is thus not surprising that the basant has been banned, Lahore’s heritage is destroyed and indigenous trees are replaced with shade-less date palms. Because a lack of pride in one’s own language, lack of ownership of one’s own heritage, an alienation from one’s own land and a disconnection from one’s own intellectual tradition can only assure the making of ignorance.

Punjabi and the making of ignorance