Shia-Sunni violence has been a common occurrence lately in Karachi. A report on the factors behind its spread 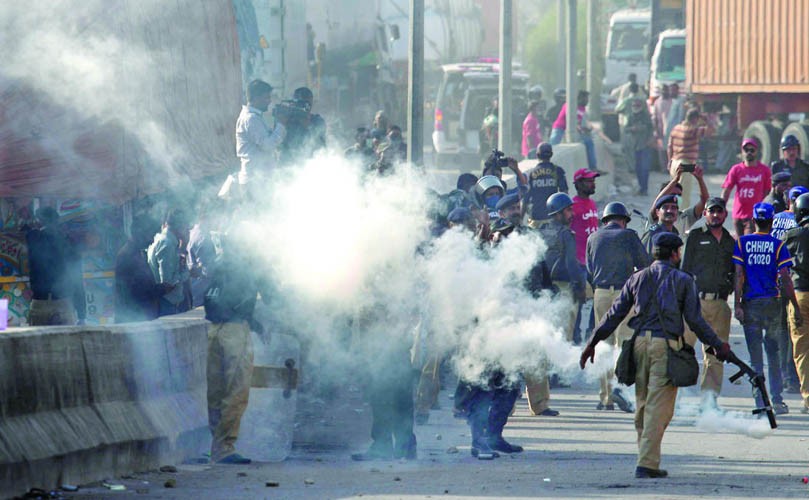 On November 4, six people were gunned down between 3-4pm in three different areas of Karachi. The forensic report of the bullet casings found on these three crime scenes matched each other, indicating the same weapon (9MM bore pistol) was used to commit the crime.

According to details provided by the police, two men riding a motorcycle killed an imam of a mosque near Haidery in District Central. From Haidery, they moved to Patel Para in District East, where they assassinated two workers of JUI(F), and then moved to Shafeeq Moor in District Central and sprayed bullets on three Ahle Sunnat Wal Jamaat (ASWJ) activists. All the victims died on spot.

The Sindh Police has announced Rs1 million as head-money for these wanted criminals.

A high-ranking police official disclosed, "at the time of these arrests, there was no tangible evidence against them, the only reason of their detention was to calm down the sentiments of the opponent sect".

The recent surge in target killing started on October 7 with the killing of a father and his son of Shia community in Gulistan-e-Jouhar. The father died immediately while the son was hospitalised in critical condition. Shortly after, three Shia men, sitting outside their house in Gulshan-e-Iqbal, after a majlis, were critically injured in a gun attack.

On October 17, unknown motorcyclists hurled a hand grenade near an imambargah in FC Area of District Central. A child died on the spot and 18 people were injured. Again, on October 29, a majlis was attacked in the vicinity of Nazimabad No. 4, killing five men including three brothers.

The recent surge in target killing started on October 7 with the killing of a father and his son of Shia community in Gulistan-e-Jouhar. Shortly after, three Shia men, sitting outside their house in Gulshan-e-Iqbal, after a majlis, were critically injured in a gun attack.

In reaction, on November 2, the opposing militant group gunned down an ASWJ activist at his electric shop in Temoria Police Station area. Two days later on November 4, six more people were killed.

On November 7, Chief Minister Sindh, Syed Murad Ali Shah, held an important press conference at the Central Police Office, Karachi, where he confirmed the arrest of two militants of outlawed Lashkar-e-Jhangvi, Asim alias Capri and Ishaq alias Bobby. Shah said that both the alleged hitmen were involved in high profile target killings, including the murder of qawwali maestro Amjad Sabri, attack on a majlis in Nazimabad, on two army personnel in Saddar parking plaza, and on Rangers at Baldia Town, where four persons were shot dead.

According to Raja Umar Khattab, head of Transnational Terrorists Intelligence Group of CTD Sindh, who nabbed these terrorists, "the slain SSP CID Chaudhry Aslam arrested Capri in July 2013, he was shifted to Sukkur Jail from Karachi Central Prison on May 8, 2014, he was released on bail from Sukkur Jail last year on March 20. He resumed his terror activities [after his release]".

"There are at least 3-4 groups who are [still] at large, despite the arrest of these two militants. There are some cases that need to be worked out," reveals Omar Shahid Hamid, SSP Intelligence of CTD Sindh.

This recent wave of sectarian killings is not new to Karachi. According to Karachi Police, since 2011, the city has lost 349 persons -- 215 Shias and 134 Sunnis.

The data indicates that the District Central of Karachi is most vulnerable to sectarian violence. In the last six years, 138 people belonging to the two Muslim sects were killed in this district.

The Central District is considered the hub of Shia and Sunni (ASWJ) activities. The Shia downtown Ancholi and AWSJ strong hold Nagan Chowrangi and Godhra are located in the same district. The Urdu-speaking community is surrounded by Pashtun-dominated areas, like Sohrab Goth, Kati Pahari and Pir Abad.

This neighbourhood is considered the nucleus of Karachi politics. The earlier headquarters of Muttahida Qaumi Movement were located in Azizabad. The workers of MQM had sectarian affiliations with the militant wings of both sects. There are interrogation reports available where these hardcore MQM workers confessed of carrying out sectarian killings.

Explaining the reasons of sectarian fault line in Karachi, a high-level intelligence source says on the condition of anonymity, "the local elders from both the sects living [in Karachi] since decades have either given up or have been cornered. The aliens [people from outside Karachi] have captured the key positions and are fueling sectarian politics in the city. They are calling the shots, they have control mosques, seminaries and imambargahs. The youth of both sects follow their instructions instead of paying heed to their elders".

A survey of a law enforcement agency concluded that residents of Gilgit Baltistan, Southern Punjab and Fata are running the affairs of imambargahs, mosques and seminaries.