As the Greater Iqbal Park gets a facelift, the locals question the historical place’s cultural standing and the provision of alternative facilities for sports activities 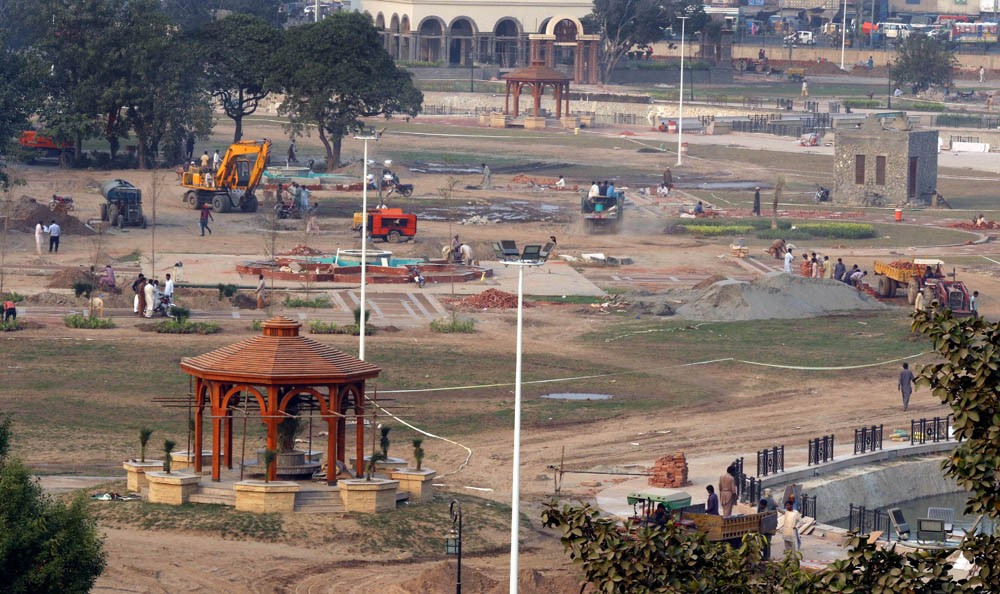 It’s a very hazy day at what is now called the ‘Greater Iqbal Park.’ The air is filled with dust particles rising from an Orange Line Metro Train construction site close by, coupled with the smoke which is being emitted by heavy vehicles plying on the road surrounding the place.

Yet, the flurry of activity is unmissable. A large group of school children has just entered the park. A horde of youngsters, apparently college students, is there already, and having a whale of a time. You also spot random tourists, busy taking photographs or chatting over cups of tea or bottles of locally prepared cold soda.

You also see hundreds of laborers, old and young, loading and unloading the construction material, while several others carry flower pots from one place to the other, amidst the noise of cranes, bulldozers, trucks and tractor-trolleys that are engaged in a tedious transportation of bricks, sand, wood and steel rods. Together, they are toiling day and night to give a facelift to the Pakistan Monument aka Yadgaar, a project of the Punjab government.

That said, the journey of the place -- from Minto Park to Iqbal Park to the Greater Iqbal Park -- hasn’t been without its share of resistance that it faced from the locals whose grouse remains that the new development offers them nothing beyond being a showpiece.

The residents of the Walled City that is the park’s immediate neighbourhood also claim that the historical place has been deprived of its core cultural status, its old-world charm and, above all, it has left those who would find it variously useful without a substitute.

Until not very long ago, the locals would come to the park and engage in sports activities of different kinds -- they would train with weights in a makeshift akhara (gym), fly kites, hold desi kushti (wrestling) contests, play cricket, football, hockey, and also a game of cards. Where many of these sports were played rather informally, the park is especially known for breeding many a national-level cricketers at the then Attiq Stadium which was housed here.

"Ideally, an alternative park for the residents of the Walled City should have been developed. But, again, it’s not a priority with the government."

Presently, the Greater Iqbal Park is a hotly debated subject among the locals, the Walled City residents, the outside visitors/tourists, and the administration.

Hamid Butt, an old resident of the Walled City, explains the ongoing contest in the following words: "Minto Park was the only playground for the youth of the Walled City where they would come every day for a match of hockey, cricket or football. The authorities have taken this away from them."

In order to support his argument, Butt recalls the names of renowned sportsmen Nazar Muhammad, Mudassar Nazar and Salim Malik who began their respective journeys by playing at the park. "They are the best test cricketers Pakistan has ever produced," he insists.

"Similarly, the park also produced many wrestlers. Both Younis Pehlwan and Gama Pehlwan started training here and went on to attain fame and glory."

TNS had an exclusive chat with former Pakistani all-rounder Salim Malik on the importance the park enjoyed in his life. He said he was "a regular at the park from 1974 till 1990. Later, a lot of young aspirants would come [to the park], watch us play and also learn a thing or two."

Malik also spoke of "many other cricketers who began their national and international careers here" such as Aamir Sohail, Ehteshamuddin, Salahuddin Mulla, Sajjad Akbar and Talat Mirza.

He was clearly disappointed at the removal of the sports grounds and cricket club from the park, and termed it "a cruel move by the concerned authorities. It was a historical place. But it’s been destroyed without the government providing any alternative spaces for cricket and other sports.

"Already, we don’t have enough entertainment facilities in our country," he continued. "And the next we do is to destroy whatever little facilities we have had. This way, we are only frustrating our youth and actually leading them to direct their energies in unhealthy and unproductive activities."

Kamran Lashari, Director General, the Walled City of Lahore Authority (WCLA), makes it clear that no alternative space is readily available. "The chief minister [of Punjab] promised to work something out but nothing has come of it so far," he said.

"Ideally, an alternative park for the residents of the Walled City should have been developed. But, again, it’s not a priority with the government. I don’t see it happening in the foreseeable future."

Lashari also said that the area under his jurisdiction "constitutes only six per cent of the Walled City. [Hence] it’s the responsibility of the city district government to work out a suitable substitute."

On the other hand, the city district government seems completely oblivious to the feelings of the locals and is concerned only with how fast the renovation and expansion work gets done and the formal inauguration date is announced. For the uninitiated, the Greater Iqbal Park was earlier due to be inaugurated on August 14 this year.

According to Tahir Sultan, director of the renovation and expansion project of the Greater Iqbal Park, "The main idea was to further beautify the Pakistan Monument and develop it into an even more attractive tourist spot. I am sure it shall pull huge crowds, on daily basis, once it is complete."

While the visitors and tourists find the freshly created lake, fountain, walkways and a host of other installations pleasing to the eye, the local residents feel stories from the park’s culturally productive past haunt every inch of the place. They especially mention "Peeli Kothi" that continues to evoke nostalgia particularly among lovers of cricket.

Besides, literary sessions would be routinely organised at the park. All of that is likely to become a fading memory.