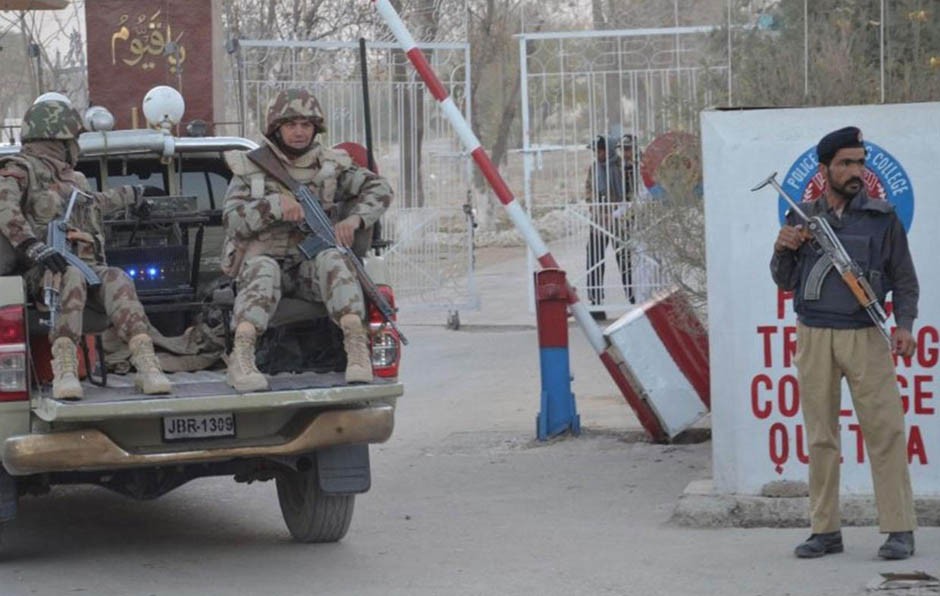 On the midnight of October 24, Quetta suffered yet another deadly terrorist attack. The attack came just two months after the civil hospital attack where an entire generation of lawyers lost their lives to a suicide blast.

Terrorist attacks in Quetta raise questions about lack of security. Every time there is a terror attack in Quetta, provincial government’s action does not go beyond condemnations and vows of defeating the enemy. However, on  ground, no substantial concrete actions are taken to reduce the likelihood of terrorist attacks in the city.

The recent attack on the Police Training Centre (PTC) is a security failure of the government as it failed to prevent the attack despite threats. This was not the first attack on the PTC. It had been attacked in 2006 and 2008. Still, the walls of the PTC were not built and that made it easy for the terrorists to sneak in and wreak havoc. There were also no sufficient armed guards inside PTC.

So, who is responsible for protecting Quetta? This is a question in the context of a growing number of terrorist attacks in the city.

Police is one of the main forces which are entrusted with the task of protecting Quetta.  According to sources in the Central Police Office Quetta, the present strength of Police in Quetta is 5,185 personnel as opposed to the sanctioned strength of 6,052.

According to police rules, one policeman is required for 450 people. In Quetta, there is one Policeman for 590 people, which is not bad given the resources. After the August 8 incident, 1,000 personnel from Balochistan Constabulary (BC) and other districts were sent to Quetta. So, this shows that there is sufficient strength of police. However, this is not the case in terms of their training standards.

Preventing sophisticated terrorist attacks, such as the PTC require extraordinary intelligence capabilities. Hence, the police is not in a position to pre-empt such attacks and avert them.

Sources tell TNS that terrorists who attacked PTC were communicating with their handlers, using social media. Combating them requires sophisticated gadgets which the police in Quetta lack at the moment, claims the source.

In addition to police, Frontier Corp (FC), a federally controlled Paramilitary force, also has policing powers. FC was granted policing powers for the first time in October 2012. Since then, these powers are extended after every three months. The FC is there to aid the police and it can provide manpower but it can’t totally replace the police.

Another question is why Quetta is the target of terrorist organisations? Azaz Syed, author of Secrets of Pakistan’s War on al Qaeda believes Quetta is chosen as a target because it is less secure compared to other provincial capitals and Islamabad. "After operation Zarb-e-Azb, some militant sectarian organisations, previously operating from North Waziristan, have now shifted to Balochistan and made the province as their operational headquarter, which is already a safe haven for such organisations."

Coming back to the PTC attack, Inspector General (IG) of Balochistan claims that he had asked for the provision of funds to raise the boundary walls on September 6. The provincial government did not release the funds.

Shahzada Zulfiqar, senior journalist based in Quetta, says the Balochistan police could have raised the boundary wall from its own resources and there was no need to wait for funds from the provincial government. "Police knew that there were real threats to the PTC but they did not take any action."

He laments the government takes steps only when the damage has already been done. "Trauma Centre was made functional after many lawyers lost their lives due to lack of emergency services and now the boundary wall of the PTC will be raised after it has come under attack."

Anwaar ul Haq Kakar, Spokesman of the provincial government, rejects the notion that the government has failed to protect Quetta. "The size of the city does not matter when it comes to facing sophisticated and well-planned attacks," he says.

Kakar says the government of Balochistan is developing the police force as the first line of defence and terrorist attacks and efforts are underway to increase the capacity of the police to combat terrorism.

He says a committee formed under the leadership of a serving brigadier is probing the issue and the Chief Justice of Balochistan High Court has been asked to form a judicial Commission as well.

A threat alert issued by the Counter Terrorism Command on October 31, which was leaked, states that more deadly incidents are expected in Quetta and has asked for pre-emptive measures and conducting Intelligence-Based Operations to combat the threat.

The capacity building of the police force and coordination between all law enforcement agencies is the need of the hour to avert major attacks in near the future in Quetta.

A history of violence

For the last five years Quetta has witnessed deadly violence. The Hazara-Shia community of Balochistan has been the primary target of violence in Quetta.

In the Year 2012, attacks increased on the Hazara community.

On June 2, 2012, 14 pilgrims were killed in a suicide attack on a Pilgrims bus in Hazar Ganji area of Quetta. Bus was part of a convoy travelling from Iran to Quetta, carrying hundreds of pilgrims.

The year 2013 proved to be the most deadly year in terms of violence in Quetta. Again, the Hazara community was the primary target.

On January 10, 2013, a twin suicide attack on a snooker club on Alamdar Road killed 92 people.

On February 16, a water tanker exploded in the Hazara town and resulted in the death of 89 people.

On June 15, 2013 another unfortunate and the first-of-its-kind terrorist attack took place. A suicide blast in a bus of Sardar Bahadur Khan Women’s University resulted in the death of 24 people, most of them students.

A deadly act of terrorism in 2013 took place on August 8, 2013. SHO of City Police Station was gunned down in Nawa Killi area of Quetta. Then another suicide blast was carried out in police lines when the funeral prayers of slain SHO were offered. This resulted in the killing of 30 people, including DIG Fayyaz Sunbal.

Moreover, acts of violence continued in 2014 but with less frequency.

On March 14, 2014 a planted bomb exploded in a passenger Bus near Science College, killing 10 people. The year 2015 was relatively peaceful for Quetta.

Only one major terrorist attack took place on October 19, 2015 in a Quetta bus terminal which killed 11 people.

Acts of violence intensified in Quetta in 2016.

On January 14, 2016 a suicide attack took place on policemen in Satellite town who were providing security to an anti-polio campaign. This resulted in the death of 15 people, including 13 policemen. On February 7, a suicide blast on a convoy of security force near Multan chowk killed 9 people.

On August 8, 2016, the suicide attack in Civil Hospital Quetta resulted in the death of scores of lawyers who had gathered to receive the dead body of the district bar president who was assassinated earlier in the day.

On October 5, the armed assailants entered a passenger bus on Kirani road and gunned down four Hazara women.

The latest act of violence in Quetta was the attack on Police Training Centre on October 25. Three armed terrorist killed 62 police cadets.