The 'real' MQM strikes back 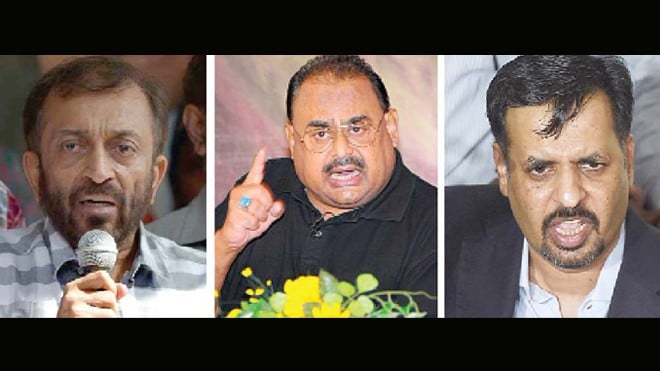 The MQM-London has announced a 12-member interim coordination committee (ICC) after the London Metropolitan Police Service dropped charges of money laundering against Altaf Hussain on October 13.

"The party could not even conceive the idea of a minus-one formula," says Dr Hassan Zafar of the newly formed ICC.

Interestingly, when members of the new Rabita Committee reached the Karachi Press Club (KPC) to hold a press conference on October 14, a heavy contingent of Police and Rangers was present outside. The Rangers tried to arrest the members of MQM-London Rabita Committee but the KPC administration did not allow them to enter into the premises.

Despite the heavy presence of Law Enforcement Agencies (LEAs) outside the Press Club, around 30-40 people reached there and started chanting slogans in favour of Altaf Hussian.

The emergence of a new Rabita Committee loyal to the leader in London, 53 days after MQM’s attacks on media in Karachi, has added to the confusion. It has also sent a shock wave among MQM-Pakistan. Those who are in hiding or sitting idle and were thinking of joining Farooq Sattar and company are now careful after this surgical strike of MQM-London.

Talking to TNS, senior leader and member Rabita Committee MQM-Pakistan, Dr Khalid Maqbool Siddiqui, admits that the emergence of a new Rabita Committee would lead to confusion among voters and supporters.

"Initially, we assumed the motive behind this move was to keep us under pressure but they (MQM-London) want to keep the people confused. They believe they still enjoy the support of the masses and they are free to live with this perception," says Siddiqui. "But in recent years our voters have not had a good experience. If they feel that MQM-Pakistan is different, we will consider it a plus-point for us and we are working for this change."

Pak Sarzameen Party (PSP), the rebel offshoot of the party led by Mustafa Kamal, seems to have a different view. Commenting on the state of confusion and uncertainty among Urdu-speaking-voters, Raza Haroon, Secretary General PSP says, "this confusion is good, it means they (Mohajirs) have choices and they can exercise their constitutional rights independently".

Mohammad Yousaf Advocate, an important player of MQM in the 1990s, says, "Mohajir sentiments are not being addressed. If this situation persists, the voters will not come out and prefer to stay at home."

But the post-August 22 events have managed to create a difference of opinion among the security apparatus about the future of Farooq Sattar-led MQM. Some players are adamant that Dr Farooq Sattar has proven himself as the emerging leader of Mohajir identity.

Meanwhile MQM-Pakistan led by Dr Farooq Sattar is demanding a level playing field. Dr Khalid Maqbool claims that "70 per cent workers and a large number of people want us (MQM-Pakistan) to play its role. But there is constant pressure and our worker is reluctant to work for us because of the fear of crackdown from law enforcement agencies. If there is security, more people will join us and the situation will become clear."

Yet, the London branch claims equal success. "Every day one or two MNAs and MPAs approach the members of our Rabita Committee. It’s a conversation in progress. We are seeking their letters of apology and resignations. The final decision to make their resignations public will be made by Altaf Bhai," says Professor Hasan Zafar Arif, member MQM-London Coordination Committee.

In a classic MQM spirit, Raza Haroon makes an interesting observation. "MQM exists at three places -- Pakistan, London and India but they all are same. There is no confusion about that. The captain of this team is Altaf Hussain, Governor Sindh is the wicket keeper, Farooq Sattar is standing in the first slip while Faisal Sabzwari is fielding at third-man position."

Before August 22, the criminal acts of MQM and Altaf Hussain were in focus. After that, the discussion is all about anti-state allegations and calling Altaf Hussain a traitor.

Those at the helm of affairs are vigilant. There is consensus on weakening Altaf Hussain-led MQM. Therefore, there is no space available for Londoners. But the post-August 22 events have managed to create a difference of opinion among the security apparatus about the future of Farooq Sattar-led MQM. Some players are adamant that Dr Farooq Sattar has proven himself as the emerging leader of Mohajir identity and this is why there was no major or mass level revolt against him.

It is not just senators, MNAs, MPAs of the party but also the recently elected UC chairmen, vice chairmen and councillors who are firmly standing behind Sattar. Security men are not willing to initiate any action against MQM-Pakistan headed by Farooq Sattar. But there is still one side that seeks to trample MQM completely.

The politics of urban Sindh has unfolded in different dimensions during the last couple of years -- when the MQM headquarter Nine Zero was raided on March 11, 2015, on Mustafa Kamal’s arrival in Karachi on March 3, 2016 and finally when MQM Supremo addressed the party workers at Karachi Press Club on August 22, 2016.

More recently, on October 17, Chairman of the PSP, Mustafa Kamal levelled serious allegations against Governor Sindh Dr Ishratul Ibad who has lashed back at him.

Sources say that some well-known faces of the MQM had approached Dr Ishratul Ibad to seek his advice about joining the PSP. He reportedly refrained them and this was confirmed by the secretary general of PSP.

"We definitely had expectations that a large number of people will join us, and those MNAs and MPAs who were interested were also in contact with Governor Sindh. He (Dr Ibad) stopped them from joining the PSP and spoke of fictitious things," Raza Haroon reveals.

Analysts believe such encounters between various factions will further aggravate the political landscape of urban Sindh. The bandwagon of PSP, MQM-Haqiqi and MQM-Pakistan all are now moving forward with the minus-Altaf formula but have little in common to become united.

Dr Siddiqui of MQM-Pakistan explains the hiccups in unification, "We have taken a decision [disconnection with London Secretariat]; now there is a dire need to take a decision while keeping the ground circumstances in mind and it should be taken here [in Pakistan]. We are not asking to take any action against him [Altaf Hussain] but others are demanding something totally different."

Referring to the criminal activities of MQM, he says "We are dissociating ourselves from that cult. But the executors of this ideology are present in Haqiqi and PSP."

Haroon says that "we have not formed the party [PSP] to win the next elections, we have established this party for our next generation and they are here to safeguard their future.

"We can work together but coalition is not possible because [the name] MQM belongs to Altaf Hussain. The entire MQM can come and join us barring a few. Farooq Sattar is our senior; he can come and lead us."

"Majority is not standing with Farooq Sattar. Except very few of his comrades, others are silent and if they speak, they don’t talk about this issue," says Professor Arif of MQM-London.

It is pertinent to mention that those who have recently joined the Altaf-led MQM from Pakistan have a rich background of politics. Two of them -- Professor Hasan Zafar Arif and Advocate Sathi Ishaq -- have been die-hard workers of PPP.

According to Mohammad Yousaf Advocate, "there is a tug of war to control the urban politics of Sindh, that too from a platform which was created by Mohajirs".

The 'real' MQM strikes back