A reporter’s notebook is not a weapon, even if he dares to ask questions or lays bare a story that was meant to remain hidden 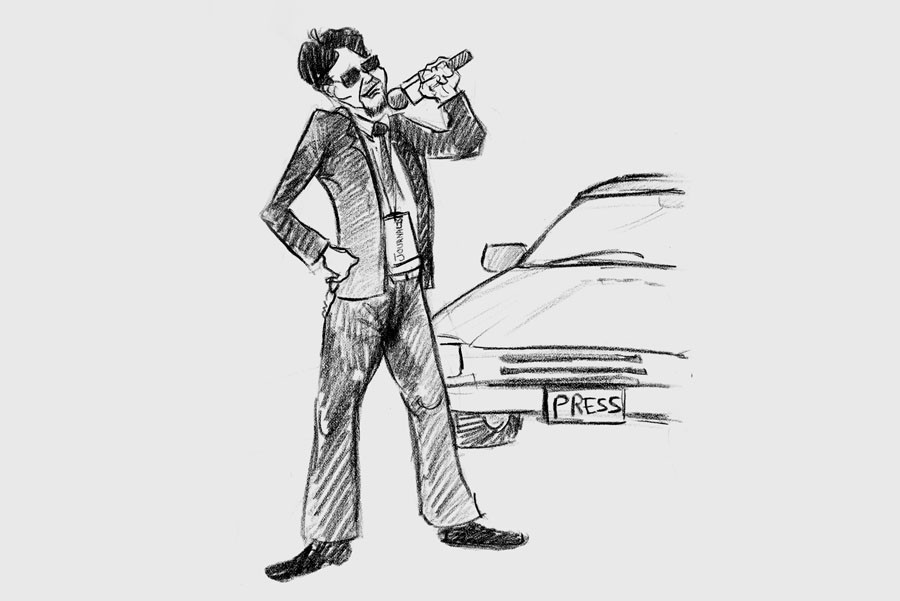 A few years ago, over oily parathas and thick doodh patti, a senior police officer in Peshawar told me how his men locked up suspected militants behind bars only to have local spooks ask them to be released. "They’re one of ours," they would say to his men.

The police officer shrugged, and then took another gulp of tea from a chipped, flowered cup. "So we release them. What can we do?"

I have heard similar stories from police officers in other parts of the country as a reporter. These were obviously off-the-record conversations held after formal interviews were done. Would any of these police officers come on the record with this? No. Their jobs would be at stake.

There was a line in the Cyril Almeida exclusive that caught my eye, reminded me of those conversations with the police: "Addressing Gen. Akhtar, the younger Sharif complained that whenever action has been taken against certain groups by civilian authorities, the security establishment has worked behind the scenes to set the arrested free".

The debate on the story has now shifted from the content of the meeting to official reactions, civ-mil fault-lines, journalistic ethics and what constitutes a breach of national security. Meanwhile, officialdom cannot decide whether it was a "half-truth", "fabricated", "fiction", or "untrue". In all likelihood, we will never know. What certainly rang true, what was familiar, what many reporters who have worked in the field know is that civil law enforcement agencies and officials often bend their knees to men from the military.

And reporters who try to report on ‘sensitive’ matters from ‘sensitive’ areas will find themselves at best shooed away with vague threats, at worst, picked up.

What followed was a bizarre conversation in which my very Pakistani cameraman was suspected of being very Nepali, and I had to tell the intelligence officer where my children studied in Islamabad.

Sometimes, the story isn’t all that sensitive either. I was in Haripur, filming a story on an archaeological discovery. We were with an employee of the KP archaeological department and wanted to film at a Buddhist stupa. It was official, and innocuous. But when we got out of the car -- armed with a camera and a notebook -- a man in a cream-coloured shalwar kameez sauntered over.

What followed was a bizarre conversation in which my very Pakistani cameraman was suspected of being very Nepali, and I had to tell the intelligence officer where my children studied in Islamabad. "Here are our ID card numbers, we’re Pakistani," I said, fuming at having my nationality and nationalism questioned. "How can you stop us from filming at a tourist site for the public?"

He said it was near a ‘sensitive’ site and we needed permission from Islamabad.

We gave up after a long argument; he was as immoveable as a Buddhist stupa. "They don’t even let us fix the road to the site," the archaeologist said later as we drove away. "How can we get any foreign tourists to visit?"

If the Cyril Almeida story and the aftermath is the macro picture -- turf wars in the top ranks -- it reflects what happens at the micro level. It isn’t just abstract notions of national security that are proscribed for civilians, but physical spaces too. There are swathes of this country that a Pakistani journalist -- forget foreign -- ventures to at his or her own risk.

Investigating tensions between the minority Kalaash people and their Muslim neighbours in the almost celestial Bumburet valley of Chitral, I had not reckoned on how little my passport, and civilian sanction mattered.

Intelligence agents swooped in to Bumburet as soon as I finished my first interview. I was asked to provide a No Objection Certificate (NOC). I argued that I didn’t need one. They said I did, because the area bordered Afghanistan and militants tended to wander hither and thither. I said the story was not about militants, whichever side of the border they be. And so on, and so forth.

In fact, when I offered to conduct interviews elsewhere -- since the problem was the ‘sensitive’ location -- I was told I needed permission from the deputy commissioner for that too. Yet again, the sense of hitting a brick wall repeatedly was overwhelming.

We were detained at the local police station, most cordially of course, with offers of juice and biscuits. But the written permission did not come through and we had to return to Chitral city incredibly frustrated.

It took us three days of pulling strings from Islamabad, to recording our trials at the DC’s office for television, to wearing out the re-dial on my phone. I was informed that even foreign tourists did not need an NOC for these areas. We eventually got our written clearance, but throughout the filming and interviews, we were shadowed by the spooks.

If getting a frightened minority community to talk about the power of the majority is hard, it is nearly impossible under the gaze of intelligence agents with notebooks. Many of our interviewees declined to speak.

I realise that many of my colleagues have had worse done to them, because they dared to ask questions, or laid bare a story that was meant to remain hidden. But this is not treason, or a crime; a reporter’s notebook is not a weapon.