‘Any number more than zero is too much’ 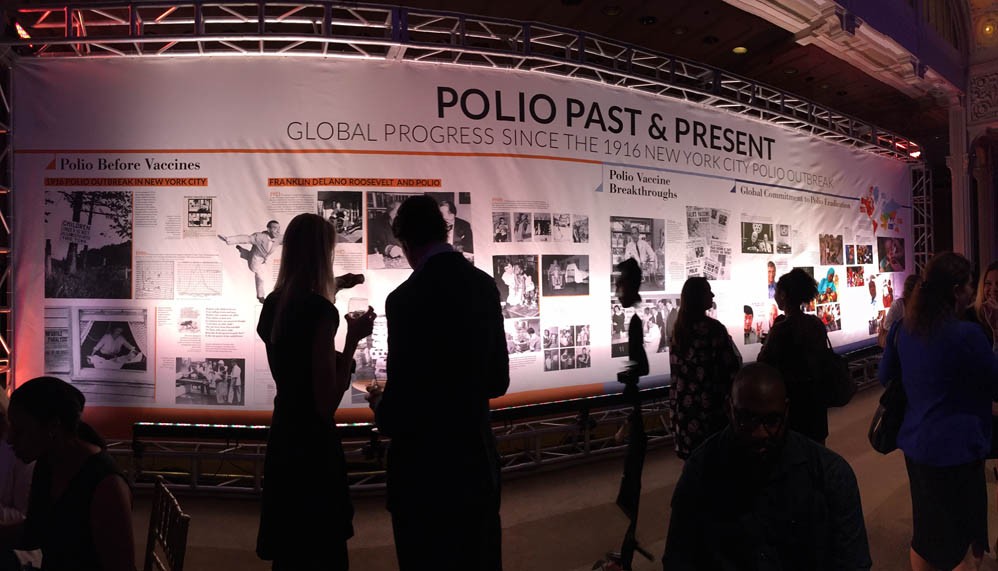 Standing on his good leg, a crutch compensating for the paralysed one in braces, eyes gleaming behind black-rimmed glasses, Ferris passionately addresses the audience of about a hundred physicians, scientists and international diplomats. They include representatives from the world’s three remaining polio endemic countries -- Pakistan, Afghanistan, and Nigeria.

For some of those present, it was revelatory that hundred years ago, polio season paralysed and killed children every summer in America. A third of the deaths occurred in New York City.

"Children were not allowed to check books out from this very library due to fear of polio being contagious," says Dr Richard Besser, Chief Health and Medical Officer, ABC News.

With the cause of polio unknown and no effective preventive measures, there was "fear and irrational actions," comments Dr Tom Frieden, Chair, Polio Oversight Board and Director, US CDC. Aggressive vaccination and "a web of humanity" -- technicians, health workers, and others working in tandem -- enabled the West to end the disease.

Over in India in 1980, Ferris’ impoverished mother, unable to care for her year-old crippled baby, left him at an orphanage in Coimbatore. A Canadian family adopted him soon afterwards.

Abandoned "on the street in Bombay" at three-years old, Minda Dentler similarly gained a new life after an American family adopted her. Polio had paralysed both her legs. Her adoptive family, all athletes, encouraged her to participate in sports. Dentler went on to become an award-winning wheelchair paratriathlon and the first female hand-cyclist to complete the Ironman World Championship in Kona, Hawaii.

Pakistan has drastically reduced polio -- 14 polio cases detected this year, down from 34 in 2015. The number of districts reporting polio has dropped by almost half, from 44 to 23.

"In 2015, my daughter Maya was born," she says, muscular arms resting on two crutches. "…I want to see a polio free world."

Like Ferris, she has "endured" (her word) multiple corrective surgeries. Thanks to medical facilities in their adoptive homes they can lead fulfilling lives despite the difficulties. They know that polio survivors in their country of birth are not as fortunate.

Ferris has met many on his travels to Pakistan, India, and Afghanistan as part of his awareness raising work. He also met his birth mother. Had she not left him at the orphanage, he would have been like the polio survivors he met in Coimbatore. With no recourse to corrective surgery or prosthetic limbs, they can’t do "anything other than crawl and beg".

"It’s not just about funds," says the shaggy-haired, broad-shouldered Ferris. "I’m calling on all global citizens to tweet, post, hold their governments accountable."

At the New York event, the mood is celebratory. The world has never been, as Director General WHO Dr. Margaret Chan says, "so close to eradicating a disease since smallpox in 1988". A panaflex-covered wall provides a pictorial chronology of the history of polio. A live jazz band belts out swinging ambient sound as attentive wait staff go around with trays of canapes.

"Fifteen million children have escaped polio due to being vaccinated," says Dr Chan. "But we are not over the finish line yet."

The world waits for three countries to cross that line. Their representatives sit together on the low stage, taking turns to speak -- Dr. Isaac Adewole, Nigeria’s Minister of Health; Hamdullah Mohib, Afghanistan Ambassdor to USA; and Raja Ali Ejaz, Consul General of Pakistan.

Dr. Adewole shares his devastation on July 4 this year when Nigeria discovered three new cases of polio while preparing to celebrate two years of being polio-free. Learning about the past and the "support from the international community", he says, "has re-energised me for the future".

He hopes that Nigeria will apply the lessons learnt from its successful eradication of Ebola. Foremost is the need for "political commitment". There is a need to "build bridges with tradition and religion and to use all available resources as Nigeria is doing -- "soldiers, nurses, regional network, neighbours" -- to fight polio.

"We are dreaming of a day we can teach our colleagues in Pakistan how to do it," he says.

Afghanistan has less than 10 cases of polio, but as Ambassador Mohib notes, "any number more than zero is too much". His country will, he says, "continue to cooperate with Pakistan to eradicate polio".

Raja Ali Ejaz reaffirms Pakistan’s "unequivocal commitment" towards this goal. He talks about the "national consensus in Pakistan to uproot this disease" and lists those complementing government efforts -- civil society, religious leaders, media, health community and "people from all walks of life".

As a result, Pakistan has drastically reduced polio -- 14 polio cases detected this year, down from 34 in 2015, a 59 per cent decline. The number of districts reporting polio has dropped by almost half, from 44 to 23.

"The last mile is often the most difficult," to quote Dr Chan. But if this rate of progress continues, the hope that in our lifetimes we’ll be able to say we live in a polio-free world, may well become reality.

‘Any number more than zero is too much’