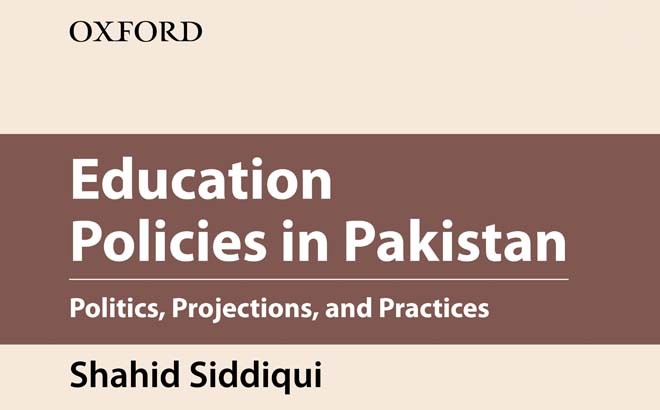 Iqra was the first word that was revealed to the prophet of Islam. However, an add-on it received during the Zia years transformed it into an eerie term: Iqra Surcharge. It meant a five per cent tax levied on all imports, the proceeds from which were to be spent on Literacy and Mass Education Commission’s various initiatives. Innovative it may sound, yet it was one of the many botched efforts to spread literacy in the country during the Ziaregime.

Another project that drew its inspiration from Islamic tradition was Sipah-e-Idrees project. This project was to comprise ex-soldiers and members of Janbaz Force to promote literacy through 16000 centres to be controlled by General Headquarters and District Soldier Boards. The money that came from Iqra Surcharge vanished, while the ambitious objectives of Sipah-e-Idrees project were also not accomplished.

It is while going through Shahid Siddiqui’s latest book Education Policies in Pakistan: Politics, Projections and Practices that a reader comes across telltale signs of Pakistan’s unenviable status in the field of education. A reader of his 320-page book is guaranteed more than a dozen, cyclical walkthroughs of the nine educational policies and guidelines that have so far been presented in Pakistan.

This is the first, book-length study on the subject and is already being hailed as a one-stop read for academics who wish to know about educational thinking in the upper echelons of power. The book has fourteen chapters in total and has a recurrent structure.

Chapters 1 to 13 take us from the first report of the Pakistan Educational Conference 1947 to the last Education Policy of 2009, each time by focusing on one aspect of the policies. One advantage of it is that by the time the reader reaches the end of the book, he/she will have the number of education policies at her fingertips.

In the final chapter, Dr Siddiqui writes: "A trend that emerged in the recent past is the patchwork of reforms funded by donor agencies in the areas of UPE, literacy, and female education. Such patchwork strategy may prove good for neatly written end-of-the-project reports bragging their success but they are of little use for sustainable outcomes."

The book has six appendices. These add-ons include: Jinnah’s speech delivered just a month after seven students were killed protesting against Bangla’s exclusion as a national language; Pakistan’s first interior minister Fazlur Rehman’s speech who also held the education portfolio; excerpt from the first opposition leader, Sris Chattopadhyay’s speech, hitherto a blocked narrative. The last chapter of the book is exclusively dedicated to the issue of implementation, its challenges and recommendations.

The lenses that the author has employed in discussing educational policies are most relevant to a critical discourse on education in the Pakistani context. From looking at the ever-changing backdrops of the educational policy making to the perennial concerns of literacy and universal primary education, there is hardly any significant issue pertaining to education that Dr Siddiqui has left unaddressed. Higher education, female education, language issues, technical and vocational education, special education, religious education, madrassas, curriculum, textbooks, teacher and teacher education are also dealt with separately by dedicating chapters to each of these vital issues.

The book is a serious attempt on the part of the author to highlight the inadequacy of the policies that have so far been presented. The author also seems to be wary of the foreign agencies that push reforms.

In the final chapter, Dr Siddiqui writes: "A trend that emerged in the recent past is the patchwork of reforms funded by donor agencies in the areas of UPE, literacy, and female education. Such patchwork strategy may prove good for neatly written end-of-the-project reports bragging their success but they are of little use for sustainable outcomes." Then there is another information that is worth looking at and can be reverse-engineered to understand the core of the problem. Consider, for instance, Dr Siddiqui’s citation of unreliable data regarding literacy rate in the country in 1992-93: It varies in different reports between 41.3, 34.0, 31.0, 35.0.

Despite commenting upon and analysing the remarkable disconnect between the policy making process and the situation on ground, Dr Siddiqui maintains his poise throughout the book. Being an academic himself and an academic administrator, the author is presently the vice-chancellor of Allama Iqbal Open University, and the author of two more books on the subject. Siddiqui has himself been privy to the process of policy-making.

Thus, the suggestions that come from him in the last chapter carry a lot of weightage. The recommendations given by Dr Siddiqui are sieved through the analysis that he has made in the first thirteen chapters of the book.

An interesting table presents the number of pages in the nine policy documents discussed in the book. The incongruity of the numbers, imply a whimsical approach towards the vital issue of education in the country. The shortest education policy has 26 pages, while the longest has 370 pages. How can one explain this inconsistency? It probably implies that the policy makers had nothing tangible in front of them and the throbbing multitudes of masses was nothing but something amorphous for them and all they did was to inscribe their impulses in these policies.