Even as a long list of critics remains skeptical about his ODI credentials, Azhar Ali has proved yet again that he stands alongside the best when it comes to Test cricket with an unbeaten triple ton in Pakistan’s 400th match 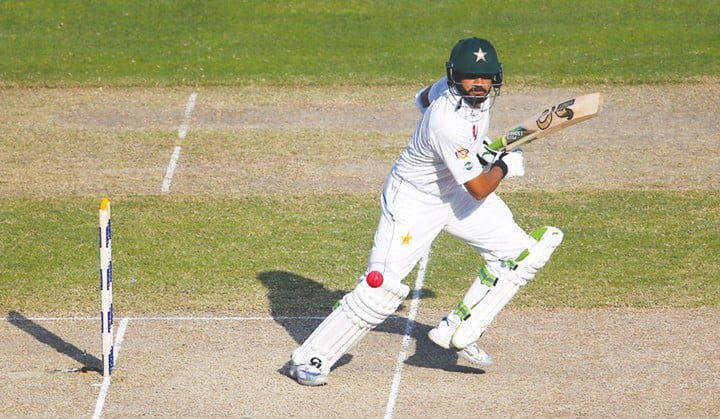 Before the series against the West Indies began, Azhar Ali was under immense pressure as Pakistan’s ODI captain. He was even asked to quit by the country’s cricket authorities and many agreed that it was a justified move. After all, Azhar had failed to impress much either as a top-order batsman or as captain in the 50-over series in England which ended in a 1-4 defeat for the tourists.

In stark contrast, Sarfraz Ahmed - Pakistan’s Twenty20 captain - seemed bursting with confidence both in his role as team leader and key batsman. There were calls to sack Azhar and replace him with Sarfraz ahead of the three-match ODI series against the West Indians in the UAE.

Any lesser man would have crumbled under such pressure. But Azhar has shown signs that he might, after all, be the right man to succeed the great Misbah-ul-Haq. At least in Tests. He lead Pakistan to a 3-0 whitewash in the ODI series against West Indies and in the process hit a 109-ball 101 in the final game which the hosts won by 136 runs.

However, the way a toothless West Indies team has performed in the UAE means that you cannot see much into Pakistan’s ODI clean sweep. That is why the debate whether Azhar is the right man to open for and lead Pakistan in the 50-over format will continue. But it might have provided the 31-year-old with a much-needed lifeline as the Pakistan Cricket Board (PCB) is unlikely to upset the ODI team’s applecart ahead of the tough series against Australia.

The century in Abu Dhabi must have served as perfect warm-up for Azhar, who was in his element when Pakistan took the field for their historic 400th Test in Dubai. Adding to its importance was the fact that it was the first pink-ball Test in Asia and only the second-ever in the history of the sport. There were fears that the batters might struggle against the pink ball, especially under the lights but all such apprehensions were blunted by the likes of Azhar, Sami Aslam, Asad Shafiq and debutant Babar Azam. The fact that their opposition lacked any firepower certainly helped. While the trio of Sami, Asad and Babar missed out on a perfect opportunity to score centuries, Azhar played like a man with a point to prove. He became the first centurion in a day-night Test and then went on to become only the fourth Pakistani after the iconic trio of Hanif Mohammad, Inzamam-ul-Haq and Younis Khan to score a triple ton. There have some voices trying to diffuse the enormity of his achievement with the argument that the West Indian attack was too gentle and the batting conditions were too perfect. Despite that a Test match triple century is never a low-hanging fruit. Such a monumental feat requires heaps of patience, concentration, skills and hunger. Azhar underlined the fact that even though there remains a question mark over his credentials in limited-overs cricket, he is a top-class Test batsman. The way he was batting on the second day of the first Test, there seemed a big likelihood that, if given the opportunity, he could have even surpassed Brian Lara’s record.

Azhar’s purple patch is good news for Pakistan as they will need him and other leading batters like captain Misbah-ul-Haq and Younis Khan to be at their best when the team tours the antipodes later this year. The Pakistanis will be playing back-to-back Test series against New Zealand Australia where conditions and bowling attacks will be much more challenging than the ones being faced by Pakistan in the UAE at the moment.

Talking about attacks, the ugly war of words between Javed Miandad and Shahid Afridi did leave a bad taste in the mouth especially after the former Pakistan captain hurled accusations of match-fixing at the star all-rounder. Such allegations are serious business and now Miandad should back his claims with something substantial as the burden of proof lies with the accuser. That said, the tiff between two of the biggest crowd-pullers in Pakistan cricket’s history should have been avoided especially at a time when the national team has proved its mettle in Tests and is showing signs of resurgence in the two shorter formats.

Meanwhile, Pakistan’s 400th Test has certainly made their cricket fans nostalgic with many coming up with their own all-time Pakistan XI. The first among my Facebook friends to come up with his choice was Hasan Jafri, the former journalist who somehow finds time to run his investment firm in Singapore when not watching or following cricket. Hasan’s XI was: Hanif Mohammad, Saeed Anwar, Zaheer Abbas, Javed Miandad, Misbah-ul-Haq, Imtiaz Ahmad (wicket-keeper), Imran Khan (captain), Wasim Akram, Fazal Mehmood, Waqar Younis and Abdul Qadir.

Now, I am yet to see any all-time Pakistan XI didn’t have the magnificent seven: Hanif, Saeed, Zaheer, Javed, Imran, Wasim and Waqar. So the actual task is to find the remaining four. I would love to have Majid Khan in my XI as it was because of him I first fell in love with cricket. But he narrowly misses out. Instead of Imtiaz, who certainly was one of the best stumpers of his era, I will opt for someone like Rashid Latif, a top-notch gloveman with under-rated batting credentials. It’s difficult to pick between Misbah and Younis but I’ll agree with Hasan on that count. Misbah is also my choice. It’s also difficult to leave out Shoaib Akhtar, who was almost unplayable when at his best. I’ll pick him ahead of the legendary Fazal Mehmood. The prospects of having the quartet of Imran, Wasim, Waqar and Shoaib in the line-up is just too tempting. For the role of spinner, I’ll go with Yasir Shah instead of Qadir. It might sound blasphemous to many (especially for fans of Qadir and Shane Warne)  but I’m sure Yasir will go on to prove himself as the best leggie to have played the game. So my XI: Hanif Mohammad, Saeed Anwar, Zaheer Abbas, Javed Miandad, Misbah-ul-Haq, Imran Khan (captain), Rashid Latif, Wasim Akram, Waqar Younis, Shoaib Akhtar, Yasir Shah.