Despite the unclear legal nature of the term ‘national’ language, a fierce debate soon arose after the partition, pitting Urdu versus Bengali in Pakistan 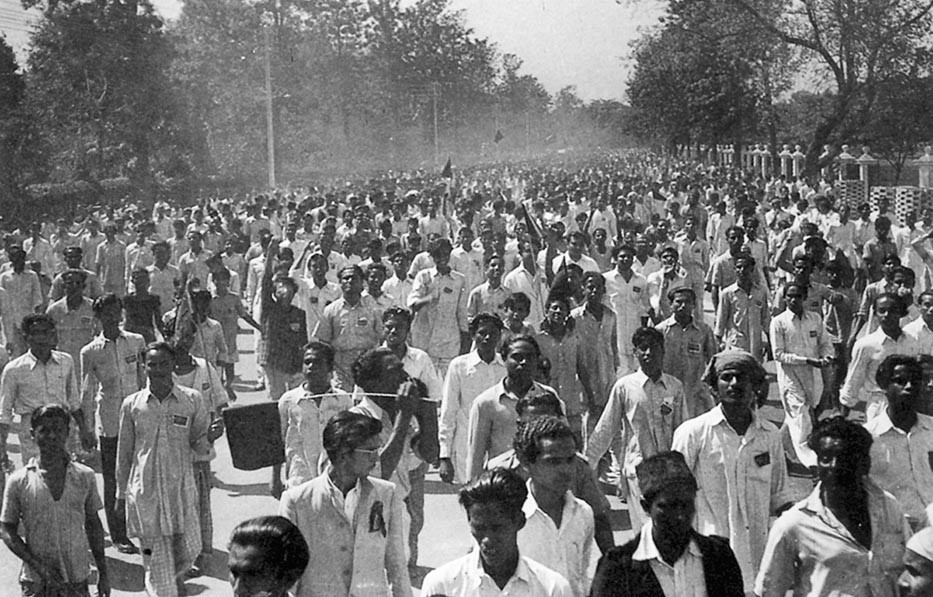 The language issue arose in the immediate aftermath of independence -- it had to be decided which language, or languages, would the new Muslim nation speak, officially and colloquially. While it seemed that the elevated position of English would have no threat in Pakistan for the foreseeable future [and as it happens to date], the tussle therefore began over a rather interesting term ‘national language.’

Hence, Pakistan became a country where the official language -- the language in which all government functions are undertaken and which is the medium of instruction in higher education -- was undisputedly English, but where there was a debate on the ‘national’ language where one wasn’t quite sure what the status really meant but felt passionately about it nonetheless.

Despite the unclear legal nature of the term ‘national’ language, a fierce debate soon arose pitting Urdu versus Bengali in Pakistan. A month after independence in mid-September 1947, a pamphlet was circulating in Dacca arguing that Bengali should be made the court language and medium of instruction in East Bengal. It even went as far as to advocate that Bengali be made co-equal with Urdu at the centre. A ‘Tamaddun Majlis’ [Cultural Association] was also set up around the same time by students at Dacca University which argued the aims of the pamphlet. This association was soon joined by the Rashra Basha Sangram Parishad i.e., the State Language Committee of Action founded in October 1947, when it became clear that official nomenclature, bank notes and the rest would be only in Urdu with no taint of Bengali.

Thereafter, there was a protest in Dacca and a meeting at the Dacca University deplored the omission of Bengali -- the language spoken by the majority of Pakistan’s people from official discourse. The fiercely national Bengalis had also now decided to ‘protect’ their language.

Amidst the ‘protection’ war between Urdu and Bengali, the premier of East Bengal, Khawaja Nazimuddin, had already shot himself in the foot. In the debate cited above he had unequivocally supported the cause of Urdu at the centre while championing the status of Bengali at the provincial level. However, this double speak -- as some put it -- did not do good for the quiet Khawaja.

As reported by the US Attache in Dacca, almost immediately student protests broke out in Dacca and two general strikes had been planned. The government was so taken aback by the reaction that hurriedly a press statement had to be released on March 1, 1948 which stated: "That issue can be decided at the appropriate time solely in accordance with the wishes of the people of this province alone as ascertained through the accredited representatives." However, such an assurance did not placate anyone and now even the date of return of Nazimuddin was being kept secret in his own provincial capital!

One would have thought that Jinnah dressed in Savile Row suits and being one of the best English barristers of his time might set aside the squabble between Urdu and Bengali as immature and focus on English as a language for the future -- especially since he was only proficient in that tongue, but his tour of East Bengal exhibited a different tone.

During the CAP debate on language, Quaid-e-Azam Mohammad Ali Jinnah as the president of the Assembly stayed impartial. One could see his uneasiness with the stance of the members of the Pakistan National Congress, but even though he had strong views on the subjects, Jinnah decided to stay quiet. He was supposed to tour East Pakistan in March 1948, and so thought that that would be the best time to broach the question and settle it, once and for all. One would have thought that Jinnah dressed in Savile Row suits and being one of the best English barristers of his time might set aside the squabble between Urdu and Bengali as immature and focus on English as a language for the future -- especially since he was only proficient in that tongue, but his tour of East Bengal exhibited a different tone.

In his decade of days in East Pakistan, Jinnah spoke on the topic of language repeatedly, and strongly. Speaking at his first public gathering in Dacca on March 21, 1948, Jinnah had a broad smile as he viewed the swarming maidan in front of him. The area was full of people as far as the eyes could see, perhaps a million souls, and they were all chanting, Pakistan, Zindabad [Long Live Pakistan], and Quaid-e-Azam Zindabad [Long Live the Great Leader]. Jinnah was beaming with joy at what he had achieved -- a sovereign homeland for the Muslims of South Asia. He was proud that even with the several hardships that partition and independence had brought, the people were full of zeal and enthusiasm for the new country -- this was the mettle of strong nations, Jinnah thought to himself.

As he conjured the new nation of Pakistan, Jinnah also wanted the country to have one state language, one lingua franca. He had heard the debate in the CAP and the public protests against the imposition of Urdu in East Bengal and was adamant to put an end to the debate, once and for all. After all, he was the founder of the country -- the Great Leader, and his word would and should be final.

Therefore, in an ironic turn of events, Jinnah adjusted his monocle and began reading his rather long and detailed speech to the people of East Bengal, albeit not in Urdu, which he was going to argue for, and nor in Bengali which his audience could understand, but in the King’s English -- the language he himself was most comfortable in. The crowd didn’t care which language the ‘Shahinshah’ -- Emperor -- of Pakistan spoke in -- they simply hung on to every word he spoke, and every pause in his speech brought loud cheers. However, when he spoke about the question of language, the cheers were slightly mellow -- some in the audience, those graduates of Dacca University and other institutes of higher learning had actually understood what he was saying. Jinnah had exclaimed:

"…Whether Bengali shall be the official language of this Province is a matter for the elected representatives of the people of this Province to decide. I have no doubt that this question shall be decided solely in accordance with the wishes of the inhabitants of this Province at the appropriate time…But let me make it very clear to you that the State Language of Pakistan is going to be Urdu and no other language. Any one who tries to mislead you is really the enemy of Pakistan. Without one State language, no nation can remain tied up solidly together and function…Therefore, so far as the State Language is concerned, Pakistan’s language shall be Urdu."

Students immediately responded to this speech, and it was reported by Tajuddin Ahmad, an eyewitness, that "Quaid-i-Azam’s speech hurt every person of this province, everybody is disgusted he was expected to be above party." Others reported that "people broke down a gate, destroyed a picture of the Quaid and protested against the Quaid’s pronouncements." The Great Leader was not above board any longer.

A few days later, Jinnah spoke at the convocation of Dacca University. Jinnah knew that students were mainly at the forefront of the agitation to give equal position to Bengali with Urdu and therefore decided to reemphasise his views on language again. Here Jinnah not only highlighted the practical need for one language, as he had done a few days earlier, he underscored the cultural and religious significance of Urdu for Pakistan. In what was also a mini lecture on culture and identity, Jinnah, again in his immaculate English and in a tone as much as of educating as admonishment said:

"For official use in this province, the people of the province can choose any language they wish…There can, however, be only one lingua franca, that is, the language for intercommunication between the various provinces of this State, and that language should be Urdu. Its State language must be Urdu, a language that has been nurtured by a hundred million Muslims of his sub-continent, a language understood throughout the length and breadth of Pakistan, and above all, a language which, more than any other provincial languages, embodies the best that is in Islamic culture and Muslim tradition and is nearest to the languages used in other Islamic countries."

There was an immediate reaction from the students assembled there with several chanting, ‘Na, Na, Na!’ to make sure that their Great Leader had heard them. But not only did Jinnah dismiss the demand for the co-equal status of Bengali, he also labelled it as not ‘Islamic’ enough, and therefore unsuitable as one of the state languages of a Muslim country. As an English speaker, Jinnah could, however, be forgiven for not knowing that people in East Bengal or for that matter in large parts of west Pakistan too, still did not read, write or understand Urdu.

The cat was out of the bag. Jinnah or West Pakistan did not have a problem with Bengali per se -- the Bengalis could continue speaking their language as they pleased in distant East Bengal. The problem was that Pakistan was an Islamic/Muslim state [the distinction was never made between these two terms in Pakistan’s early years and they were used interchangeably], and only an Islamic/Muslim language could be its state language and lingua franca, and that language was Urdu alone.

“Journalism is my profession; fiction is my passion”