View from the valley

As Pakistan showed keen interest to speak on behalf of Kashmiris and their sufferings, Kashmiris have begun to reclaim their traditional love and yearning for Pakistan 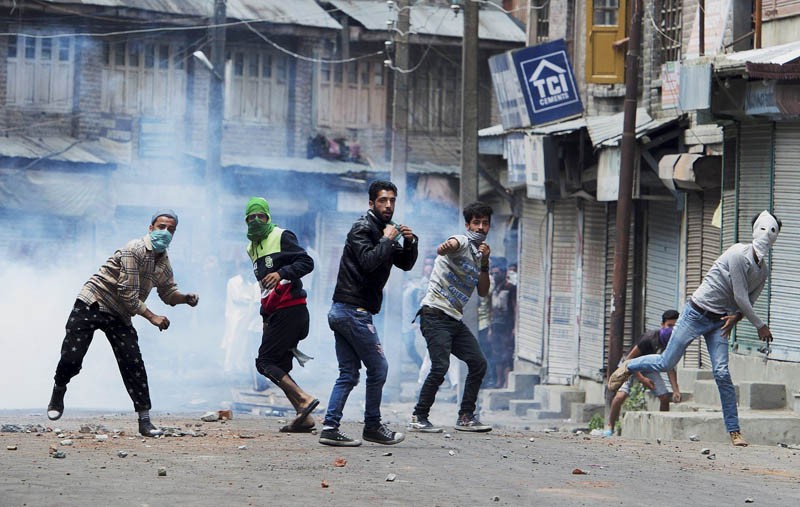 Eversince the creation of Pakistan and India, Kashmiris have been bearing the brunt of bad politics that has vitiated the South Asian milieu. The so-called composite dialogue started in 2003 between the two countries, which ultimately produced a ‘peace process,’ was characterised as a turning point in the checkered history of the two neighbours as the two former heads of the state -- Atal Bihari Vajpayee and Pervez Musharraf -- sought to formalise the acceptance of de facto political realities in Kashmir, much to the detriment of Kashmiri aspirations and existential anxieties.

In this entire process, the Kashmiris had no agency and got co-opted by their patrons on either side. There is no doubt that certain cosmetic gestures were initiated, such as the introduction of a bus service, barter trade between the two sides of the divided Kashmir that deals in a large quantity of contraband items, and increased movement of people as a way of promoting dialogue. In the beginning, these did lend some credence to the peace posturing between the two nations and between India and Kashmiris.

However, Kashmiris soon became disillusioned as the process dragged on: it started in 2003 and creeped till 2011 without making any meaningful change in the mindset of the Indian establishment or the ground situation. Instead, Kashmiris were treated to unceasing lullabies and a glossary of utopia -- from colour coded messages, such as the ruling People’s Democratic Party’s (PDP) usage of green flags or alluring signages to deceptive phrases, such Insaniyat, Jamhooriyat and Kashmiriyat.

Interestingly, while the Indian state was coaxing the masses through illusory mind management techniques into buying the new narrative, the Pakistani state foisted a similar narrative on its side of the Kashmiri leadership with little need to consult what she calls the core constituency.

Read also: No headway in sight

As a result, any hope of attaining a respectable solution from a Kashmiri perspective was aborted and the sufferings and yearnings of Kashmiris were to be forgotten on the margins of what was hailed as a grand rapprochement between the two south Asian neighbours.

The current mass uprising in Kashmir and its impact in the shape of triggering a war of words and threats of war between India and Pakistan has been received with a certain distraction from their otherwise blood-drenched routine.

For Kashmiris, the main stakeholders, the two nations wanted to claim, to borrow from the American political scientist Francis Fukuyama, ‘the end of history’. But for us, it was a long collaboration of deception and sufferings without any acknowledgement or support from either side or the world at large.

Like all other efforts in the past, the peace process also faltered as India and Pakistan failed to negotiate the challenges, more so because of India’s failure to honour its commitments, both with Kashmiris and Pakistan.

Besides, as the pro-freedom armed resistance in Kashmir fizzled out because of India’s ruthless counter insurgency measures and Pakistan’s commitment to a new policy of ‘conscious uncoupling’ from Kashmir, India had little motivation to address the age-old Kashmiri alienation.

On the contrary, India, emboldened by Pakistan’s withdrawal, initiated new draconian tools and measures to further entrench oppression, occupation and the structures of violence against the population that remained surrounded by more than 7,00,000 military troops.

In this backdrop, the current mass uprising in Kashmir and its impact in the shape of triggering a war of words and threats of war between India and Pakistan has been received with a certain distraction from their otherwise blood-drenched routine. Beyond that, the India-Pakistan engagement remains inadequate, for in the Kashmiri mind, India is never sincere and Pakistan is not competent to affect any change.

"Every engagement between India and Pakistan generates some hope albeit a very remote one that Kashmir issue might get resolved. But these engagements have a history of ending up in disappointments. Therefore, while there is some hope generated, there is a heavy memory of continued failures of these talks to generate any benefit," says Khurshid Wani, a senior correspondent of daily Pioneer, a New Delhi-based English newspaper.

However, this time around, as Pakistan showed keen interest to speak on behalf of Kashmiris and their sufferings, Kashmiris have begun to reclaim their traditional love and yearning for Pakistan. As a result, the diplomatic engagement at the UN or disengagement at the SAARC level has raised new levels of interest among Kashmiris. "This will not solve anything for us, but it certainly affords us some global attention," says Abid Bilal Bhat, a grocer in a Srinagar locality.

View from the valley