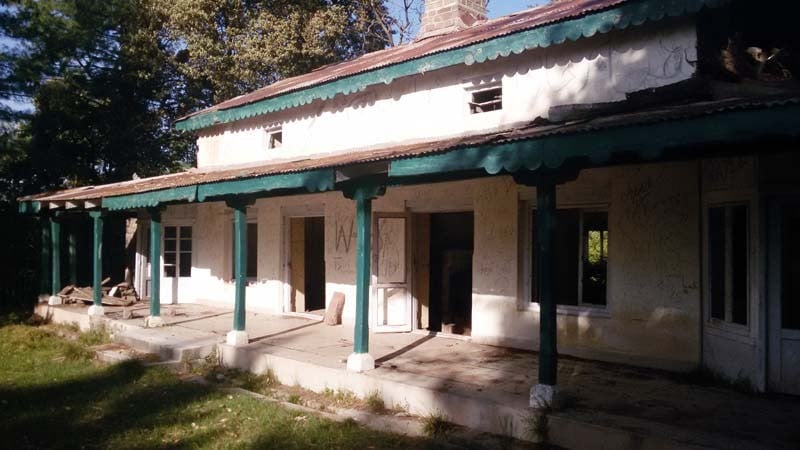 Our final stop last week was a small town called Ban, about 30 minutes from Karor, from where another 30-minute drive will take you to the vicinity of Patriata.

After some 15 minutes of the winding road and amazing views, you will reach the Patriata top, the other end of the famed cable car. Patriata top has a small bazaar, which operates as long as the cable car operates. Once the cable car closes around 8pm, it becomes a ghost town as all the shopkeepers either go down to Patriata town or to their homes in nearby villages. There is an exclusive fairytale Dak bungalow at the top of the hill. The whole hill is fenced and belongs to the Forest Department.

Patriata forest rest house was constructed in 1913 at the cost of Rs3,600. It was renovated a few years back and now has four bedrooms. This rest house is one of the most decent and well-maintained places to spend a night, where once the cable car stops, the only sounds you hear are from the winds hissing through the deodar forest and wolves howling in far off valleys. Mind you, it’s not a very pleasant experience in the dark of the night, especially if you are with children.

The rest house is known to have hosted the Sharifs a few times. The caretaker will show you a particular spot where Nawaz Sharif sat alone to enjoy the views.

Our next stop is Charehan forest rest house near Gulehra gali. So drive down the winding road through the Patriata town to the Murree Expressway. In about 10 minutes, you will reach Jhika gali, where to your right is a hill covered with blue pines of the Charehan forest. Just before the hill, a trek leads to an ancient water point, traditionally known as baoli, from where another 30-minute trek will take you to the Charehan rest house. You will need a guide for this trek.

Alternatively, take a u-turn towards Islamabad and continue for about a couple of kilometres till the Charehan hill on your left starts receding. Just where the hill recedes to give way to the valley views, there is a jeep trek going up to the rest house. I have not driven on this trek but my guess is that it would take some 15 minutes to get to the rest house on foot from the Expressway.

The book confirmed the rather juicy story of Imran Khan staying at the rest house between July 8 and 12, 1992, after the 1992 cricket world cup with his foreign friends. "No water arrangement, no electricity, poor arrangement," he commented in the book. He paid Rs320 and signed the book.

The Charehan forest rest house was built in 1913 at a cost of Rs3,190. It has three to four bedrooms, along with a sunroom and a dining area. The rest house crumbled during the 2005 earthquake. More than a decade later, the building still awaits reconstruction.

Read also: Of sahibs and forest rest houses -- I

Another 10-minute trek will lead you to one of the last surviving colonial forest towers. This is a huge early 20th century steel structure on top of a hill meant to keep an eye on forest fires as well as any illegal tree-felling activities. Few people dare to go to the top of this tower -- I was not one of those.

But back at the Charehan forest office, I had the opportunity to lay my hands on the visitor’s book. The book confirmed the rather juicy story of Imran Khan staying at the rest house between July 8 and 12, 1992, after the 1992 cricket world cup with his foreign friends. "No water arrangement, no electricity, poor arrangement," he commented in the book. He paid Rs320 and signed the book.

Perhaps, this was the time when Imran decided to fix the system by joining politics.

"Visitors are requested to see before they go that their servants leave crockery, house and surroundings clean," wrote another visitor. Pratap Singh of Imperial Forest Service and Mr and Mrs K C Robinson were apparently frequent visitors. A very interesting entry is by Lord Emsworth from Blanding Castle, England, who stayed for almost a month in summer of 1928. The only mystery is that Lord Emsworth is a character in fiction by P G Wodehouse. Whoever was Lord Emsworth at Charehan in 1928, he wrote, "Some of the pleasure of staying at this beautiful lodge is mitigated by absence of necessities like water, bedding, etc".

General Tasawar Hussain of the celebrated Guides Cavalry was the last visitor to the rest house in summer of 2005. But the most recent entry is by Naseerul Haq of the Forest Department, who inspected the rest house on October 9, 2005 - a day after the disastrous earthquake.

There is also a scenic Bhurban forest rest house at Aliot on the Jhika gali-Bhurban road. The beautiful rest house with a huge lush green lawn has since been designated as the Governor House, and out of bounds for all and sundry like yours truly.

Another forest rest house is on the Jhika gali road towards Lawrence College. Again set in dense pines, the rest house is reasonably well maintained and worth spending a night or two in.

On the way back to Islamabad, on the old Murree road through Jhika gali, Kuldana, Sunny Bank and Ghora gali, you will see a sign on your left indicating the Ghora gali forest rest house up on the hill. The rest house was constructed in 1890 for Rs1,875, and has four to five bedrooms with exquisite wooden work, bay windows and a wide terrace. There is a dwindling water spring close to the rest house, a well-kept nursery and the good old caretaker who takes care of the property like it’s his own, again a fast vanishing breed.

The visitor’s book shows that General Ayub Khan, then Commander in Chief, visited the rest house on May 20, 1951, along with Brigadier Burki and party. Razia Ahmed and Rahima Ahmed had their first pony rides at this place while Governor Punjab and his family took up an entire page of the visitor’s book on June 1, 1958.

You can continue on the same road in dense pine jungle to reach the elegant and historic 1881 Punjab forest school with its academic and residential blocks. The same road further down will take you to the Murree Islamabad road on your way to Islamabad.

My friend and forester Rizwan Mehboob has advised me to cover Surba, Rajgarh, Ghoon and Panjar forest rest houses to complete the Kahuta circuit. These unexplored forest rest houses will remain a reason for me to go back to Murree-Kahuta forest division sometime soon.

These colonial rest houses all over Pakistan are the government’s assets, meant to promote tourism. While these rest houses are reasonably maintained, there is room for tremendous improvement in terms of furniture, fixtures and services. The government must consider outsourcing them to hoteliers or organisations that will promote sustainable ecotourism.