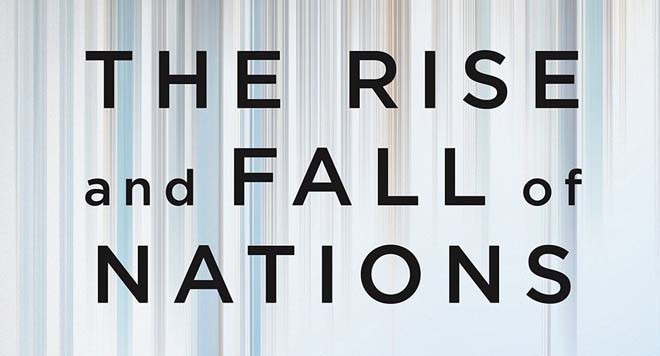 Ruchir Sharma, an Indian American who works for Morgan Stanley and has been counted amongst the world’s most influential investors, has written his second book that goes with the title The Rise and Fall of Nations. His first was called Breakout Nations. He also writes opinions and editorials in newspapers like The New York Times and Washington Post.

Sharma loves both writing and investing equally and finds it quite difficult to prioritise one against the other. He lives in New York but then, like any other globe-trotting thinker and investor, he travels around the world from Sao Paulo to Chittagong and from Qubec to Cape Town, and the current book is said to have been "shaped by his twenty five years travelling the world".

In his current book, he has looked at different economies of North America, South America, Europe, Africa, East Asia and South East Asia and Australia and New Zealand and has used ten matrices for measuring the strength of those economies at their current level and also the future outlook for the next five years. The matrices used for assessing any economy are political makeup, level of manufacturing and services, leveraging of the company i.e. debt levels and how the debt is being used, demographics especially growth in the working age population, inflation levels, currency pricing etc.

In the last chapter, he has categorised different economies as "Good", "Average" and "Ugly" in relation both to their current state and the future outlook for the next five years.

Now before I move to the case of Pakistan where our true interest lies, I just want to let the readers know as to what does this most influential investor and thinker think about different global economies. He rates the United States as ‘Good’, Europe as ‘Average’ with some economies of the Eastern Europe which was the backwater like Poland, Romania and Ukraine categorised as ‘Good’. Canada and Australia’s outlook is ‘Average’ and New Zealand doesn’t even come under discussion. For China, the outlook is pretty ‘Ugly’. Can you imagine that while Chinese economy seems to be going to the dogs, Vietnam and Philippines look very promising. Africa is bracketed as ‘Average’ and Russia, Saudi Arabia, Brazil, Chile and Turkey seems ‘Ugly’.

Closer to home, he has clubbed four nations of South Asia -- Pakistan, Bangladesh, India and Sri Lanka. In general the future outlook for South Asia holds ‘Good’ and for Pakistan it looks ‘Very Good’. I started jumping on the couch after reading the outlook for Pakistan and for the rest of the time I was reading the book I was only interested as to what the future outlook holds for Pakistan in the eyes of most influential investor and thinker. But then the author has added a caution and it’s damn important that we read and comprehend this fine print in detail.

In his current book, he has looked at different economies of North America, South America, Europe, Africa, East Asia and South East Asia and Australia and New Zealand and has used ten matrices for measuring the strength of those economies at their current level and also the future outlook for the next five years.

Pakistan’s economy is taking off and the future outlook till 2020 has been termed ‘Very Good’. The rationale used in building this argument is that our working age population is growing and that’s a very good sign for the economy. Inflation is under control which is increasing in the vicinity of 3 per cent but on the other hand GDP is growing at 4.5 per cent. Contrary to the populist demagogy, our debt level is pretty low in relation to comparative economies whereby debt to GDP is at 65 per cent. We have a decent manufacturing base with export economy and we are also investing in factories by opening industrial parks as elucidated in the China-Pakistan Economic Corridor (CPEC).

Our trade deficit is on the decline as our import bill is on the wane, thanks to lower oil prices in the international market. We are also not exporting commodities whose prices are plummeting in the international market. We would be getting a shot in the arm once the CPEC starts rolling out as China has committed to invest US$ 46 billion in infrastructure and power related projects in Pakistan over the next 20 years.

Sharma says that even if 50 per cent of this commitment materializes, it would be enough to provide us with the necessary infrastructure that will take us from a low-income to a middle-income country during the next five years.

Though hard to digest, the most influential writer and investor says that we don’t have stale leadership like Vladimir Putin of Russia and Recep Tayyip Erdogan of Turkey who have clung to power for more than a decade and are in their fourth terms. But then Nawaz Sharif is in his third term too.

A very important point the author highlights is that for a coup-prone country like ours, the military finally seems to have decided to concentrate on ensuring the internal as well as external security while staying clear of politics.

Now all of this positive fervour is pretty precarious too and must be taken with a grain of salt. Because a) this outlook is only for a period of five years as it is difficult to forecast in the future beyond five years, and b) in our case exogenous factors can change the game in a split of a second. Any assassination or intervention or change in the political makeup, which is not evolutionary and is rather revolutionary, can take the whole of this down like a house of cards. Our history is replete with these examples.