"You haven’t seen anything like Zindagi Kitni Haseen Hai before!"

Anjum Shahzad reveals all as he steps into commercial cinema with ZKHH, after directing the intellectually heavy Mah-e-Mir 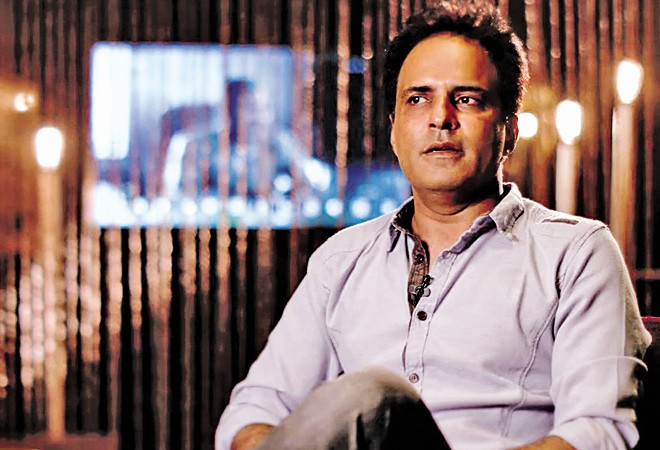 Director Anjum Shahzad follows that principle in real life. The actor-turned-director is all set to release his second feature film - Zindagi Kitni Haseen Hai - and believes that the romantic movie will appeal to both the young and the old. He may have a point because the soundtrack of his film is first rate, the selection of lead pair has been done keeping the audience in mind and the promotion has been in full swing. Will the film be able to stand its ground in front of stiff competition? Will it start the era of romantic films that has gone down the drain in Pakistan? Instep on Sunday decides to meet Anjum Shahzad to talk about his movie, his upcoming projects and his most famous character - Bobby. Excerpts:

Instep: How scared are you of the competition - especially Actor in Law and Janaan - that is releasing on the same day as your film?

Anjum Shahzad: I am not scared at all; in fact, I am happy that so many Pakistani films are releasing this Eid ul Adha. However, it would have been better if all three producers would have sat together, discussed a strategy regarding release dates and all films could have been released one by one, rather than at the same time. We are still in a revival mode and we don’t have that many cinemas and until and unless we support each other, we can’t move forward.

Instep: What is the story of ZKHH … hasn’t that kind of a film been done before in Hollywood (Kramer vs Kramer), Pakistan (Aaina) and India (Akele Hum Akele Tum)?

AS: ZKHH belongs to the same genre of filmmaking as do the films you have mentioned but trust me it’s unlike any film you have seen. It’s about a teenage couple in love for whom things go haywire when they get married. The film shows how two passionate individuals (played brilliantly by Feroze Khan and Sajal Ali) fall in love, get blessed with a son and then go their separate ways when things don’t happen as they had expected. It’s a kind of a rollercoaster ride, which the audience will enjoy because they haven’t seen such a movie in a long time.

Instep: Don’t you think Sajal Aly is too young to play the mother of a six year old?

AS: I will answer this question through my film (smiles) because on screen she doesn’t play Sajal Aly, but the character. Both Sajal and Feroze have worked really hard in the film and I must mention that the kid Jibrail has also done a fabulous job; his acting will keep you engrossed in the story.

Instep: How did you get hold of Sukhwinder Singh for the film?

AS: I am a huge fan of Sukhwinder Singh but Dr. Abdul Khaliq who is also the writer/producer of the film and Adnan Dhool (of Soch) must be credited for this decision. Adnan, who has composed four songs of the film, sang the ‘Kitni Baar’ song but we felt that a voice like Sukhwinder’s would make the song grand. The producer and music director spoke to Sukhwinder who agreed to sing what can be termed as his first number for a Pakistani film.

Instep: The music of your film has become very popular after its release; why do you think people appreciated the songs?

AS: I feel that without the director’s input, a film’s music can’t become popular since it’s the director who visualizes the way the song will be filmed. The music director should be on the same page as the director because you can’t have a good song without knowing how the visuals would be in the movie.  I sat with my music directors - Sohail Haider, Adnan Dhool and Rabi Ahmed (Soch) and Farhan Sheikh - when they were composing the songs and I guess that helped us in the long run. We went for the singers (like Mustafa Zahid, Momina Mustehsan) who suited the song rather than popular faces and I am glad that the audience agreed with me.

Instep: So you selected Momina Mustehsan purely on merit?

AS: Oh yes (laughs). Adnan Dhool suggested that we use Momina’s voice for the title track and I agreed to it since they had collaborated for Ek Villain a few years back. Momina has a nice voice that suited the situation but little did we know that she would become so popular after her ‘Afreen Afreen’ rendition in Coke Studio.

Instep: Most of the films released this year have been flops; how do you think we can improve the situation?

AS: There are two things that we must do so that we can start making good films on regular basis. First, we need script doctors in Pakistan who can look at the first draft and recommend changes; secondly we need to understand that a reporter and a critic can’t be one and the same. A reporter reports things as they happen whereas a critic must think objectively and analyze the film by using all his knowledge. You can’t say that a film is hit or flop because often a flop film is not bad or a hit film is not good. They must realize that there is a lot of effort in making a film and by rejecting one, isn’t just the right way.

Instep: We don’t have film writers in Pakistan; how difficult is that for a director who is asked to call the shots for a script that has been penned by a TV writer?

AS: There are many writers in the country who have neither written for TV or films and that’s what makes them unique. The screenplay of the film must be strong otherwise it will not do well and it can only be made better if the writer and director understand each other. Thankfully in Zindagi Kitni Haseen Hai, the writer is also one of the producers of the flick and that helped me a lot in executing the script my way.

Instep: You were born in Islamabad, studied in Lahore (and Islamabad) and are working in Karachi. Do you think that the Karachi-Lahore rift between producers actually exists?

AS: Karachi is the center of film production in Pakistan these days, just like Lahore was in the past. Both the cities have immense talent although Karachi is producing more films than Lahore but that’s because Karachi is a metropolis and talented individuals from all over the country come here for work. However, I feel that a good producer who knows how to make a film will come up with a good film and it doesn’t depend on the city he hails from; if the producer isn’t good then even the best actors, director and writer wouldn’t be able to save it.

Instep: How do you successfully shuffle between TV and film - first came Mah-e-Mir, then Rang Laaga, now ZKHH?

AS: I don’t find any problem with the switch but I don’t think that I would be able to do TV frequently in the near future due to my film commitments; I have several projects on my plate. But if some director can do justice to both films and TV, I think they should do both.

Instep: Don’t you miss acting especially after creating an iconic character like Bobby in Family Front?

AS: I love acting and had done theatre and TV for the love of acting; while I was doing Bobby, I realized that with time, acting will fade and I will have to move forward. That’s when I thought I would be better utilized behind the camera rather than in front of it and became a director.  Now every day is a new day for me.

Instep: But people don’t acknowledge the person behind the camera?

AS: That was also one of the reasons why I decided to go behind the camera. I am a very low profile person and I enjoy my life in the way I want to live it. At first I used to love the attention Bobby got but later it became irritating especially when I was out with my family and people disturbed me. I am still open to good roles in theatre and if anyone has a role for me, I would love to do it.

Instep: You could have acted in your film …

AS: I have done a minor role in the movie but that wasn’t planned … the actor who was supposed to play that character didn’t come on the sets on time and I took over as I had a film to shoot. (Smiles)

"You haven’t seen anything like Zindagi Kitni Haseen Hai before!"