As Zindagi Kitni Haseen Hay, Sajal Aly’s debut film, releases all across Pakistan, the actress sits down with Instep and talks about her life 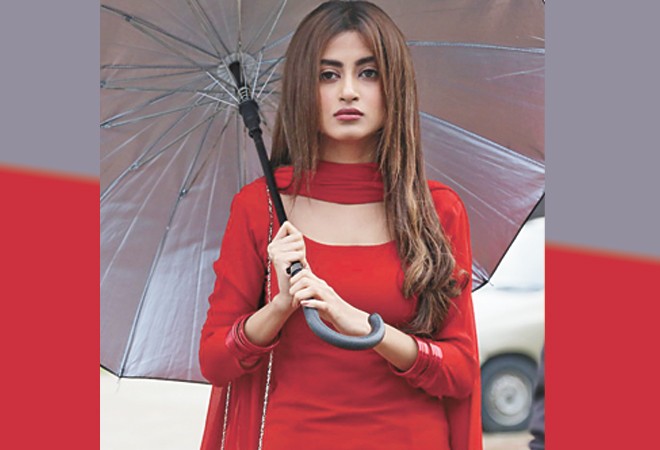 As Zindagi Kitni Haseen Hay, Sajal Aly’s debut film, releases all across Pakistan, the actress sits down with Instep and talks about her life, her work both sides of the border and how someone so young can balance so much.

Sajal Aly is riding the wave these days.

The 21 year old actress has multiple hit TV plays to her credit and she is all set to make her big screen debut with Anjum Shahzad’s romantic drama Zindagi Kitni Haseen Hay, releasing this weekend. While most film stars begin their career in Pakistan before trekking across the border, Sajal has actually already shot her first film in Bollywood. She has been cast as Sridevi’s daughter in the upcoming Mom, in which she undoubtedly plays a pivotal role. This week, however, is all about ZKHH, which by no means was the first film offered to her.

"I really liked the story and the character as I thought it would give me enough margin to perform instead of being just an eye candy," she stated as we sat for a candid conversation on a Saturday afternoon. "My character in the film (Mahira) is a progressive one; the girl I am playing is very emotional about her relationship but she’s strong at the same time. She’s not blind in love and is bold enough to take a stand for herself. She belongs to a well-off family but wants her husband to stand on his own feet too."

Sajal Aly does understand a thing or two about standing on your own feet. She stepped out of the house at the age of 16 to support her family after her parents’ separation. Born in Lahore, she started off with various commercial projects before she gave her first audition (in 2011) and landed a prominent role in drama serial Mehmoodabad Ki Malkain that marked her acting debut. Sajal came to prominence after her remarkable performance as Afsheen and started receiving multiple offers. From an ignorant young girl in Nanhi to a possessive daughter in Asim Raza’s telefilm Behadd, to an emotional yet strong woman in one of her recent plays, Gul-e-Rana, Sajal managed to played a diverse set of roles in her career that spans five years. And it established her as a serious actress with serious talent.

Acting does come naturally to her, she confesses. Acting was a childhood dream that she never really thought would be fulfilled.

"I was a drama queen since school days," she recalled. "When I was a child, I wanted to become a politician, probably because that too involves some sort of acting," she laughed.

But even though acting is her passion, Sajal is not obsessed with it, she said. Since her circumstances didn’t allow her to complete her education, she plans to study further. "I might take a break from work and go abroad for studies. I don’t fear that people will forget me if they lose sight of me because I know it’s my time today and it may not be the same tomorrow."

Becoming an actor is also a lot harder for someone who doesn’t come from the same background. Even if you make way to the industry, one has to go through several stages before people start appreciating your work.

"When you are new, people will not easily accept you," Sajal recalled some of her ‘bad’ experiences. "If you’re good at your work, it’s more difficult for them to digest that a newcomer can do so well. There were a few actors in front of whom I never felt comfortable. I remember I did a play in which there was an actress who didn’t like me at all; she never behaved well with me. I used to stay quiet and sit in the corner all the time; I never worked with her after that. Now when I meet these people, they are all too sweet with me."

Coming from a humble background, Sajal is indeed a very simple girl who had no idea of what’s going on in the world around her, even after working in the industry for some time. "Two years ago I didn’t have any clue of what celebs wear on TV shows and if one has to purchase the outfit themselves," she shared. "I never socialized much; I used to go to work and come straight back home. With time I started taking decisions for myself and started self-learning the ropes."

What brought Sajal to limelight more than anything else before the announcement of ZKHH was her role in upcoming Bollywood film alongside veteran Indian actress Sridevi. Sajal signed on for Mom that revolves around the story of a mother (Sridevi) and her daughter (Sajal) and is expected to release earlier next year.

"I was on the set when I received a call from director Haseeb Hasan who asked me if I was interested in doing an Indian film," Sajal shared details of how she landed the role in the film. "I said I’ll see the script and will do it if I like the story. At first I didn’t believe it was Boney Kapoor, I thought it must be some Tony Kapoor or so (laughs). When I talked to them they asked me to come to India but since I was busy with the shooting of ZKHH I couldn’t go. Later on I met them (Boney Kapoor, Sridevi and others) in Dubai when their family was on a visit there. I read the script, I really liked the story and he signed me for the film without taking any audition. After that when I asked Sridevi how they came to know me, I found out that they were fond of Pakistani dramas and watched me in Nanhi and Chup Raho and that made them approach me."

It surely was a huge achievement, especially for someone so young, to bag a prominent role in a Bollywood film and get the opportunity to work with seasoned actors like Sridevi, Nawazuddin Siddiqui and our very own Adnan Siddiqui who will be seen as her father in the film. "I had a great experience working there especially with Sridevi; she’s a great human being apart from being a wonderful actor," the ZKHH actress shared. "She welcomed me with an open heart and encouraged me at every step. Others too took very good care of me including Adnan bhai who was very supportive in each and everything."

Talking about her role in the film, Sajal said that it definitely had impact and was pivotal as she was playing Sridevi’s daughter and the film is about her relationship with her mother.

"I wouldn’t have accepted the offer otherwise," she asserted. "The way our industry is growing, we don’t need to go anywhere else just for the sake of it unless the role has enough substance." Sajal was also offered a role in Anurag Basu’s Jagga Jasoos that stars Ranbir Kapoor and Katrina Kaif in lead roles but she didn’t find it meaty enough.

Coming back to her upcoming film ZKHH, Sajal is overwhelmed by the kind of response they received during their promotional activities. One of the major attractions in the film is the chemistry between the couple, Feroze Khan and Sajal Aly, who won many hearts in Gul-e-Rana (their second serial together). When asked if she thought the two could replicate the same on the big screen, Sajal took a pause and said, "Now this one is a difficult question. I can’t say anything about it right now. However when I see people’s excitement when they see us together during the promotions, I feel we’d be able to create magic on screen. Audience’s feedback after watching the film will decide if we should work together in the future or not (laughs)."

One could see the sparkle in Sajal’s large eyes as she talked about her experiences and the fact that she’s content with what she is doing. She wasn’t in a hurry, she shared, and wasn’t desperate to run behind films, commercials, awards or success in general. "At this point in my career, I try to stay happy and thankful for the love and appreciation I receive on my work," the very young albeit mature actor concluded. "It doesn’t matter if I don’t get to do a commercial or receive an award; I am content with what I am doing."

In conversation with Sajal Aly…

Instep: Was your family okay with your decision of becoming an actor?

Sajal Aly (SA): My family didn’t have any issues but until I proved myself, they had fears. There wasn’t much pressure but it took them some time to accept all this because even today people don’t have a good opinion about the industry we’re a part of.

Instep: What do you look for when you’re offered a role?

SA: I am more inclined towards intense, emotional characters. I feel we should show the audience what they want to see. I tried doing something different too but I noticed that they like to see Sajal crying on screen. This is my time and if people want to see me crying I don’t mind doing that.

Instep: How has the transition from TV to films been?

Instep: Do you plan to continue working for television in the future?

SA: Yes, definitely! I can never say no to that; after all it’s our dramas due to which people are calling us in India and offering us roles in Bollywood films.

Instep: Are there any other projects you are currently working on?

SA: Not right now. I might do a play very soon but I haven’t signed on for any since I have to be in India after ZKHH’s release to shoot the remaining part of Mom.