A corridor of secrecy

Is Balochistan sceptical about the CPEC for the right reasons? 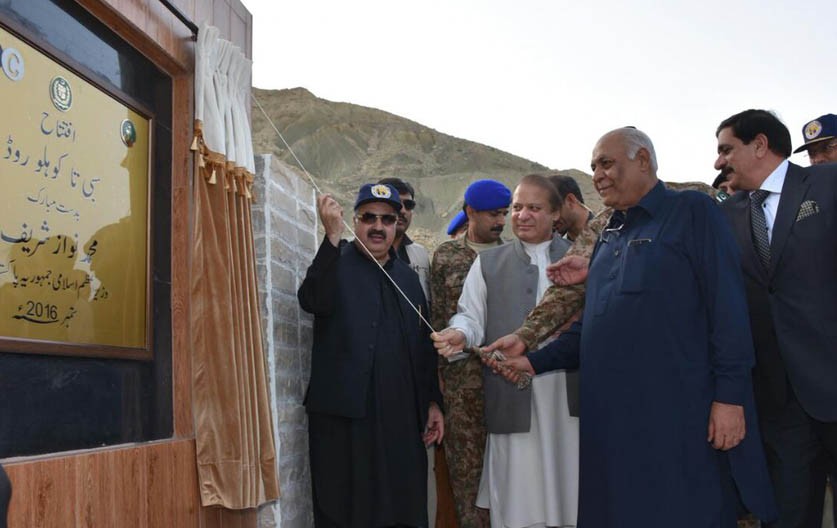 China-Pakistan Economic Corridor (CPEC), the so-called game-changer for the region, has been in the news for almost three years. Still, it’s not free from controversy, and politicians from Balochistan and Khyber Pakhtunkhwa (KP) maintain that Punjab is the prime beneficiary of the $46 billion project that is likely to materialise by 2030.

On August 30, Prime Minister Mian Nawaz Sharif paid a one-day visit to Balochistan for ‘inaugurating’ the CPEC project. He laid the foundation of Sibi-Kohlu highway, Gwadar free zone, business complex and university campus. The PM’s visit was praised by the ruling PML-N in Balochistan but the opposition members termed it an eye-wash.

"People of Balochistan desire progress and development and they are fully in favour of the China Pakistan Economic Corridor (CPEC) project," claims Hasil Bizenjo, Senator and Federal Minister for Ports and Shipping. It’s obvious that he cannot oppose the CPEC, as he is indebted to the PM for awarding him the ministry in the first place.

On the other hand, Sardar Akhtar Mengal, former Chief Minister of Balochistan says that if the federal government did not accept the rights of Baloch related to the CPEC then its outcome would be the same as Kalabagh Dam.

Though Mengal is not opposed to the overall development approach of CPEC, he fears, the CPEC may become exploitative for people of Balochistan if constitutional guarantees are not ensured.

His detractors however claim that he is challenging the CPEC because he is in opposition, and that his position would not be any different from Hasil Bizenjo’s if he was in power.

In Khyber Pakhtunkhwa and southern Balochistan, the major objection to the CPEC is the western route. Pashtun politicians of the area claim that the federal government has diverted the western route to the east to benefit its support base in Punjab. On the other hand, Baloch politicians resist the CPEC because it may convert the local population into a minority.

Analyst Shahzada Zulfiqar corroborates Sardar Akhtar Mengal’s view. He believes the CPEC will not benefit the common Baloch; "that’s why Baloch leadership is opposing it".

Pashtun politicians of the area claim that the federal government has diverted the western route to the east to benefit its support base in Punjab. On the other hand, Baloch politicians resist the CPEC because it may convert the local population into a minority.

He says that the CPEC may disrupt the demographics in Balochistan. "According to government sources, 3-4 million people would migrate to Gwadar from other parts of the country. That would tantamount to converting the local population into a minority in their own land."

Zulfiqar adds that no one in Balochistan would object to the CPEC if legislation is carried out to protect demographic changes.

Jan Achakzai, who represents the PML-N, disagrees with the notion that the CPEC is exploitative in nature for smaller provinces. According to him, there can be different scenarios for the CPEC in Balochistan, "If the CPEC becomes a transit corridor then out of the estimated $200 billion transit fee, Balochistan would get nine per cent share through the NFC. If the CPEC evolves into a development corridor then the western route, which passes through the poorest districts of Balochistan, would usher in an era of socio-economic prosperity. And if it is turned into an economic corridor then 26 proposed economic zones would be established along the western route in Balochistan which may turn the province into an economic giant."

Mehfooz Ali Khan, former Secretary Finance in Balochistan, agrees that the CPEC is indeed a game-changer. "Balochistan government unfortunately by remaining reactive instead of proactive, did not get its due share in the early harvest projects of $28 billion, and did not avail facility in jobs or training."

He adds that if Balochistan had got 9.09 per cent share based on the NFC formula, things would have been different.

Federal Minister for Planning and Development and Reforms, Ahsan Iqbal, said in the parliament that the CPEC agreement is confidential and cannot be made public.

The federal government came under severe criticism after it disclosed the number of projects in each province, and when the senate standing committee asked for a number of security personnel to be deploy to protect the Chinese officials in each province. According to a source, there are a total of 330 CPEC projects, and out of them 176 are based in Punjab and only eight in Balochistan. According to another source, out of $28.6 billion early-harvest projects, Balochistan stands with less than $660 million. However, these figures cannot be verified because the federal government is not sharing the agreement details.

Likewise, there have been multiple all-party conferences (APCs), seminars and policy dialogues, where the federal government made promises to address the concerns of Balochistan and Khyber Pakhtunkhwa. But the promises were not incorporated in the federal budget.

Similarly, the federal government has not been very courteous to those who criticised it for mismanaging the CPEC. Ahsan Iqbal went to the extent of terming them "enemies of Pakistan".

The federal government needs to change its attitude to make the CPEC successful. It needs to address the concerns of smaller provinces like Balochistan and remove any misunderstandings to get nationwide support for a project like the CPEC.

A corridor of secrecy

The road to recovery