Love is in the Air

The Zindagi Kitni Haseen Hay OST, composed by an ensemble of producers including Soch, Udan Khatola and Sohail Haider, is a melodic prelude to the film 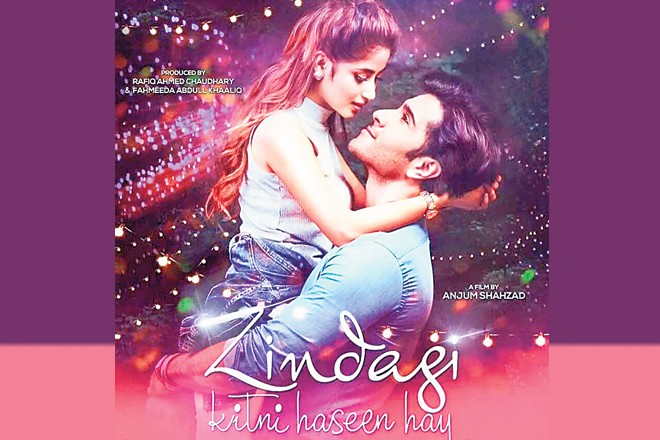 Anjum Shahzad recently won the award for Best TV Director at the Lux Style Awards and it seems he is carrying the Rang Laaga streak into his upcoming film Zindagi Kitni Haseen Hay. The feature film - Anjum’s second after Mah-e-Mir that released earlier this year - is slated for an Eid ul Azha release and has a soundtrack to die for, with stars from both sides of the border rendering their vocals for the album.

In total, there are seven songs on the soundtrack of ZKHH, four of which have been written and composed by Adnan Dhool and Rabi Ahmed of Soch band, who had done a song ‘Awari’ for Ek Villain (with Momina Mustehsan) two years ago.  The rest of the songs have been composed by Farhan Shah and Shahid Rehman of Udan Khatola and Sohail Haider and surprisingly, too many cooks haven’t spoil this melodious broth.

The album kicks off with the wonderful title track featuring the vocal talents of Adnan Dhool and Momina Mustehsan (yes, of Coke Studio fame); their duet takes you down lover’s lane from where you don’t want to return for some time. The song has repeat value and is a treat for fans of Momina Mustehsan as well as the Soch band. Then there is the ‘Ali Ali’ (manqabat) by Farhan Shah of Udan Khatola which not only has an excellent beat but also charges up the listeners with its pacy composition and invigorating lyrics. The song might feature in the background, depending on the situation and placement in the film, but it is nevertheless very soothing to the senses.

Then comes ‘Tootiya Tara’ where Adnan Dhool essays the anguish of a young and angry man in love, as portrayed by Feroze Khan; the two versions of ‘Udaasiyan’ by former Roxen vocalist Mustafa Zahid – both slow and fast – are a treat considering the Bollywood-returned singer is rendering his voice for a Pakistani film for the first time. The song has been composed by Sohail Haider who is the third composer in the movie and does a commendable job because you get lost in both the versions.

The best song, or my favourite at least, in the film however is Bollywood vocalist Sukhwinder Singh’s Kitni ‘Baar’ that has also been composed by Soch band. It’s a trademark Sukhwinder Singh song where he uses his range masterfully and blows the audience away.

The producers and director must be commended for roping in the ‘Chaiyyan Chaiyyan’ and ‘Jai Ho’ star for a Pakistani film and his presence really gives a boost to the soundtrack. Adnan Dhool and Rabi Ahmed’s last collaboration ‘Chulbul’ is is a bona fide dance number and one can safely predict that it will be played at shaadis and mehndis this year, possibly giving our usual playlist of Bollywood hits tough competition. On the whole, the album is worth your time and money and can be rated as one of the better soundtracks for a Pakistani film this year.

Love is in the Air