Usman Riaz and the crew of MAS talk to Instep about hand-drawn animation and their first major venture, The Glassworker 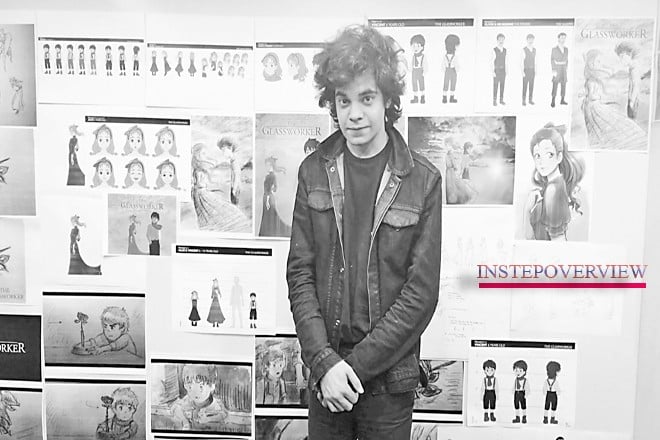 It is an ordinary afternoon in Karachi as I head out to Mano Animation Studios to meet its founder, the prodigious Usman Riaz. Being terrible at finding spaces, I call Usman to ask for directions (despite his text message with the right address) and he confesses that he’s not good with giving directions either; he politely asks if it would be okay to pass the phone to a colleague who could guide me. Within the next couple of minutes, I reach the head-office of Mano Animation Studios.

Upon entrance, I’m greeted by Usman who walks me through the office space and quickly introduces me to several members of the team. Among them is producer Khizar Riaz and animation director Aamir Riffat who, along with Usman, show me this brilliant space they’ve created for nurturing creativity and beautiful creation.

"How are you funding this?" is one question that pops into my head and Usman responds with a smile, "the Kickstarter campaign" through which Mano Animation raised 116,000 dollars (earlier this year).

The space includes a conference room, where we eventually settle down to talk, as well as a number of rooms where a few members of the team are busy working. The interior is neither stuffy nor pretentious.

The doors are open and the artists, the animators, the storytellers, move freely. In one room there is a bulletin board covered with sticky neon notes on which Riaz scribbles out his thoughts. In another room is Saib Irfan, a 16-year-old intern whose drawings look like paintings. In another, the notice-board is covered in dozens of sketches which articulate a meticulous vision.

Inside the conference room, I meet another integral team member, art director Mariam Riaz Paracha, before we sit down to discuss The Glassworker, the first major venture of Mano Animation Studios.

For those who don’t know about The Glassworker (Sheeshahgar), it has the unique honour of being Pakistan’s first ‘fully hand drawn’ animated film. Inspired by the works of the famed Studio Ghibli, the Urdu-language film – a coming-of-age story – is about a boy called Vincent "who learns the art of glassblowing at his father’s shop and his friendship with a young violin virtuoso named Alliz" and their relationship and its evolution over time. The film is also special because it aims to explore the effects of war on children but in a manner that is both subtle and subliminal.

"I wanted it (the film) to be influenced by the way we all grow up in Pakistan," explains Usman as we discuss the film and its themes. "I feel everyone in this room, including myself, had a relatively normal childhood but when we look back on it, it is strange to grow up amidst all these strikes and processions and people killing each other."

Exploring the effects of war on children does not mean the film will be filled with grotesque, haunting images. "Its going to be very subtle," says Usman, "We’re not going to pound it on people’s heads."

The Glassworker, according to Usman, will be in Urdu and will "show a slice from our life and what we’ve experienced" but from the point of view of the characters.

The film is also unlike any other animated project done in Pakistan, in cinema, television or otherwise. Having seen a glimpse of the footage, I can say it is beautiful with an uncompromising aesthetic and when completed, this film will be a landmark achievement.  And the beauty that we see in every frame is the result of hours of meticulous drawing and not computer-generated imagery (CGI).

"We went through dozens of portfolios," recalls Riffat, "and most focused on computer-generated imagery or were software-oriented but had little raw drawing talent."

As I ask him about some of Pakistan’s most well-known animation projects such as 3 Bahadur and Burka Avenger, Riffat explains that the animation seen in those films was done purely through the computer.

"They are made by using computer-aided software and technology," he says. "The models are made on the computer and then they are digitally manipulated to create movement. With us, just to create a simple movement, we have to first visualize it, translate it into 15 or 20 drawings and so on."

While Usman Riaz is writing/directing the film and producing its score, the rest of the team, made up of like-minded individuals, also have their own expert areas.

Mariam Riaz Paracha, who is art director (and Usman’s spouse), is designing the architecture within the film which, according to Usman, means "designing the whole space".

Mariam explains that it means "coming up with themes and ideas". "I work a lot with background artists, environment designer and environment architects,  so pretty much looking over everything."

For Usman, Khizer and the others in this room, the joy is in working together as a team. "I feel grateful to have found like-minded people like Aamir and through him others," says Usman; it’s a sentiment that is also shared by producer Khizer Riaz, who is also Usman’s cousin.

With a team of 20 including two interns, Mano Animation Studios is more intimate in its setup and approach and draws inspiration from Studio Ghibli and not just Disney.

"We all grew up watching cartoons. Maybe me and Mariam and Khizer and Aamir watched a bit more obsessively than other people," says Usman. "I keep talking about Studio Ghibli but for me Studio Ghibli (in my mind) is the greatest animation studio in the world because of their content. They resonate with people for a reason. You can tell when a film is genuine and their work is genuine."

Its also important to remember that with a film like The Glassworker, years are spent before the final product is ready to make its appearance and this teams knows it too.

"You devote four or five years of your life to such a film. It’s like graduating from a different university each time," says Usman and adds, "Because there is no industry in Pakistan, we are free to do whatever we want. So we have the responsibility of making a beautiful film and then hopefully set a standard for other people to aspire to."

With The Glassworker, Mano Animation Studios team also hope to educate people in Pakistan about animation itself and pave way for future generations who find themselves drawn to the art of drawing and anime.

"I feel a bit sad that we’re sitting here and talking about it like this, it should’ve been there already," Usman trails off…

That said, the lack of a hand-drawn animation industry is not something that will keep this dream team from planting the first seed. Having made several appearances at various TED events over the last few years, Usman has allowed his experiences to open his mind and let them guide him.

"TED opened the door to this whole project," says Usman as he reveals the impact TED has had on him. "The experiences shaped me into thinking like this. When you go to TED, you see all these people striving for what they believe in. I was lucky enough to go at 21 which is a young age compared to everybody else. I saw the potential of what we could do. It opened my mind up to the fact that it might be possible to do it in Pakistan."

Usman’s chance meeting with Steven Spielberg, earlier in the year, which caught media’s attention right here at home, is not something he wants to use to piggyback off to make a bigger name for himself.

"He took out time out of his day to come see what we were doing," recalls Usman. "I spoke to him for about 25-30 minutes and he was talking like he’s a peer of Mano and gave us advice. It meant a lot, it was very nice to talk to him. It was surreal because it’s Steven Spielberg but it was also very gratifying."

And though Usman has spent several years recording music and performing, its not something that has been a life long dream.

"Music was never something I wanted to pursue my whole life," confesses Usman. "I was doing it; it was flavor of the month. The real dream always was to draw and to have an environment like this where other artists can come in and we can work on something together.

Whenever somebody asks me about why I stopped, I haven’t stopped, its just that I won’t perform anymore. I never really enjoyed performing."

His view on music may have changed over the years but what’s obvious is that Riaz was and still isn’t in it for fame or screaming, adoring fans.

"Music is a tool to accentuate a larger story like if there’s a painting, you can add colors to it but you still have to draw the whole composition and the sketch and everything else.  I like writing music; some people live for screaming, adoring fans and that is a very limited point of view. But I think something like this, where a bunch of people come together and start to make something beautiful, that’s so much more exciting."

Though Riaz is not planning on taking to the stage for a musical evening anytime soon, music will play a significant role in The Glassworker. "One of our characters is a musician. It just accentuates and adds color to the story."

At 25, Riaz has done more quality work than most can accomplish in a lifetime, if that. This includes his music albums, stellar appearances on Coke Studio, an appearance on Uth Records, a Lux Style Award nomination, OneBeat conference(s), contribution to the soundtrack of Pakistani film – Seedlings, playing at SXSW and attending approximately 13 TED events (since making his debut at TED in 2012 when he shared the stage with Preston Reed) including the most recent one in Kuala Lumpur. But it’s founding Mano Animation Studios that has truly set Usman Riaz’s dream into a reality. "All we want to do is make beautiful work," says Usman.

And given the rest of the team and their dedication to the cause of animation and to Mano Animation, the future of animation, drawing and storytelling in Pakistan is all set to get redefined.

A storyteller of our time

At 25, Riaz has done more quality work than most can accomplish in a lifetime, if that. This includes his music albums, stellar appearances on Coke Studio, an appearance on Uth Records, a Lux Style Award nomination, OneBeat conference(s), contribution to the soundtrack of Pakistani film – Seedlings, playing at SXSW and attending approximately 13 TED events (since making his debut at TED in 2012 when he shared the stage with Preston Reed) including the most recent one in Kuala Lumpur. But it’s founding Mano Animation Studios that has truly set Usman Riaz’s dream into a reality. "All we want to do is make beautiful work," says Usman.  And given the rest of the team and their dedication to the cause of animation and to Mano Animation, the future of animation, drawing and storytelling in Pakistan is all set to get redefined.