A potential but unexplored opportunity

Why have Pakistan and Iran not been able to cash in on the potential trade opportunities after the lifting of sanctions? 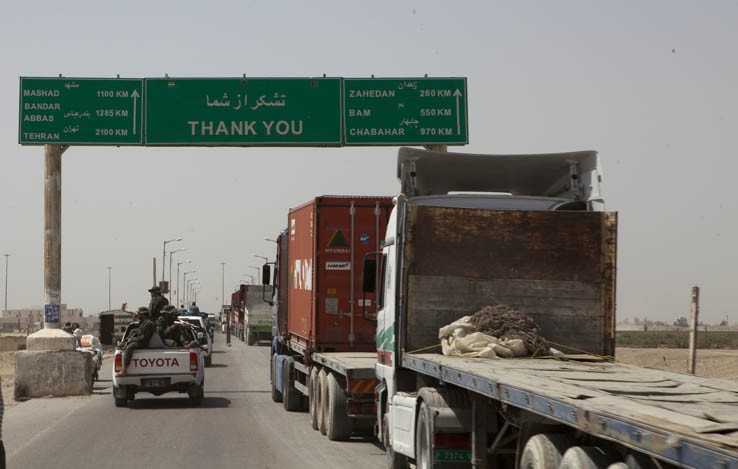 The lifting of sanctions from Iran by the US in January this year was supposed to open new trade avenues for countries across the world -- and Pakistan was better placed in this scheme of thinking.

But, trade between Pakistan and Iran continued to dwindle, even more drastically in the regional scenario that emerged after curbs on Iran were lifted.

During discussions with the business community leaders and traders, a number of factors were underlined for the falling trade between the two neighbours. The litany of hurdles later on tapered off to a very few factors rocking the commerce and trade relations between Iran and Pakistan. They think the issues identified could be overcome with sagacity of the leadership on both sides.

Foreign influence was identified as one reason that keeps both the countries from doing normal business. The common observation remained that trade would always be ‘toing and froing’ as there exists no proper banking and trade relations between the two countries.

In terms of size, the fiscal 2012 remained the peak year when bilateral trade of Pakistan and Iran exceeded $3 billion and the State Bank of Pakistan (SBP) figures, as quoted by a member of the Khyber Pakhtunkhwa Board of Investment and Trade (KPBOIT), Muhammad Ishaq, indicate imports of $124 million and exports of $131 million that fiscal.

This was the last time the trade took a stride from $1 billion in 2011 to $3billion in just a year. The business circles observe that common geographical borders, religious affinities and the political parties in power in Pakistan then were among the factors that gave impetus to enhanced level of trade that year.

But the same plummeted to the lowest level of $36 million of exports to Iran and less than $1 million of imports in 2015. It was even less than the volume of $500 million trade the two countries conducted in 2005.

Also, the countries concluded Preferential Trade Agreement (PTA) in 2006 to boost trade but has not been implemented yet.

"Besides the import of power and petrochemical inputs from Iran, Iran also needed to import over $1 billion halal meat from Pakistan. The export of matches, textile, fruits, vegetables and grains to Iran can go to the tune of over $5 billion," says Muhammad Ishaq.

In terms of size, the fiscal 2012 remained the peak year when bilateral trade of Pakistan and Iran exceeded $3 billion and the State Bank of Pakistan (SBP) figures indicate imports of $124 million and exports of $131 million that fiscal.

President Federation of Pakistan Chamber of Commerce and Industry (FPCCI), Abdur Rauf Alam, holds the absence of formal banking relations between the two countries responsible for their low, unpredictable and fluctuating mutual trade volume. Alam says only a few days ago he took a delegation to Tehran and met Iranian counterparts and officials to take stock of issues impeding trade between the two countries.

"I literally implored them [Iranians] to establish formal banking system with Pakistan as without it no trade ties could flourish," he informs, continuing that on his return he went straight to SBP Governor Ashraf Mahmood Wathra to know what the central bank was doing to establish banking relations with Iran.

He quotes SBP governor as telling him they had completed all the formalities to establish banking relations with Iran, but they were waiting for a response from the other side.

On August 15, Iranian Ambassador Mehdi Honardost was in Peshawar to meet the business community where he was informed about the barriers in trade with Iran. Muhammad Riaz Khattak, Vice President FPCCI, told the Iranian envoy that "it is high time that trade barriers are removed with both sides implementing the PTA in letter and spirit".

The ambassador said that before strengthening bilateral trade, Pakistan should facilitate Iran in banking transactions to help Iranian traders. "Right now we are in the era of turning around our economy and Pakistan businesses should grab this opportunity. Time is short. Pakistani businessmen should be active now."

He also referred to trade between Afghanistan and Iran (when sanctions were in place) that stood at $2.5 billion. Comparatively trade with Pakistan, he said, was not more than half a billion dollar.

"I am shocked to note that cooperation between the two countries is not taking place regardless of what other countries (a reference to US, Saudi Arabia and other Arab countries) were doing during the last three decades," Mehdi Honardost exclaimed.

He says both the countries were seemingly not prepared for "post-sanctions-lifting" scenario. "It exposed the insight of our economic planners who could not plan to get advantage of the situation," he says, adding that industry in Pakistan could get 50 per cent of its basic raw material and inputs from Iran at cheaper rates. "Iran’s trade with Afghanistan is bound to reach the staggering figure of $3 billion, while its mutual trade with United Arab Emirates (UAE) stands at $8 billion. But with Pakistan, it is less than $500 million despite the fact that both sides have the potential of over $20 billion mutual trade."

Shinwari adds that 5,000 petrochemical units in the country import raw materials from far-off oil producing countries that raises the cost of production to an uncompetitive level, while these units can get these materials from Iran on considerably low rates. "Over two dozen Iranian banks operate across the world. Bank Saderat Iran has branches in the US and other regions, including Europe, but no Irani bank is operating in Pakistan. Similarly, none of the Pakistani banks operates in Iran."

According to him, for exports and imports, traders need a formal banking system to open Letter of Credit (LC).

It is inevitable for the central banks of the two countries to facilitate banks to open branches in both countries, if they want to boost mutual trade. Formalisation of economic ties through banking relations is essential for improved trade.

A potential but unexplored opportunity