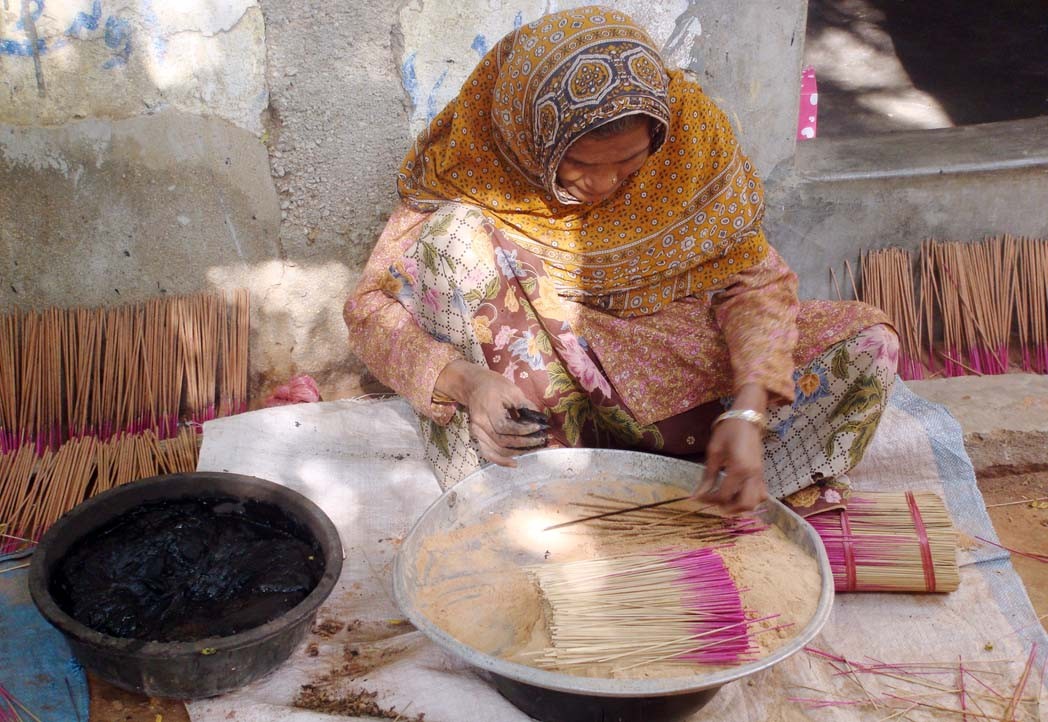 Homeworkers produce goods for global supply chains from within or around their own homes. They do works ranging from stitching garments and weaving textiles, stitching shoe-uppers and footballs, producing craft products, processing and preparing food items, rolling incense sticks, cigarettes and cigars, assembling or packaging electronics, automobile parts, and pharmaceutical products. Although they remain largely invisible, homeworkers are engaged in many branches of industry -- old and new -- and represent a significant share of employment in global supply chains, especially in Asia.

Homeworkers produce goods and services for both global and domestic supply chains. Under the most common sub-contracting arrangement, the homeworkers provide the workplace, pay for utilities, and buy/rent and maintain their own equipment. The contractors provide the work orders and raw materials, specify the product/s to be made, and sell the finished goods, or supply them to firms further up the chain. In most cases, the homeworker goes to the contractor to receive raw materials/deliver finished goods. In a few cases, the homeworker is herself a sub-contractor who splits the order and raw materials that she receives among other women in her neighbourhood. Also, some sub-contracted homeworkers work together in groups: either in one woman’s home or in a common space within their neighbourhood. Whatever the arrangement, many homeworkers have limited knowledge of the markets and prices for raw materials and finished goods because they do not deal in these markets.

Most homeworkers are paid by the piece and the piece-rates remain very low -- far less on average than what factory workers in the same supply chains are paid. Moreover, unlike factory workers, homeworkers have to cover many of the non-wage costs of production (workplace, equipment, utilities, transport) and absorb many of the risks of production (delayed or cancelled orders, unreliable supply of raw materials, delayed payments, rejected goods). A recent study in three Asian cities found that transport represents one third of the operating costs of home-based workers. Also, homeworkers do not receive the worker benefits that some factory workers receive.

The inspection mechanism of ascertaining and determining wages and then transparently monitoring the wages being paid to the workers, especially women, remains an unattended task.

Discrimination on Equal Remuneration remains an untouched subject as far as the labour compliance is concerned. In order to eliminate discrimination and avert violation of rights enunciated in the Universal Declaration of Human Rights, the ILO has framed two Conventions, which are part of the Conventions categorised as Fundamental or Core Conventions.

The government has to declare and pursue a national policy designed to promote equality of opportunity and treatment with a view to eliminating any discrimination in respect of: a. access to vocational training; b. access to employment and to particular occupations; and c. terms and conditions of employment.

According to the Global Gender Gap Index, 2015, Pakistan stands at the bottom -- 144 out of 145 countries in the world. The annual index, prepared annually by the World Economic Forum, measures the gap through looking at economic participation and opportunity, educational attainment, health and survival, and political empowerment. According to the LFS, 2014-2015, the female labour force participation rate is 22 per cent compared to that for men at 67.8 per cent; women are paid 23 per cent less than men for similar work; women’s average monthly income is Rs9,760 compared to men’s monthly earnings of Rs15,884, and only 0.3 per cent women are employed as managers, 6.4 per cent as professionals and 0.9 per cent as technical workers.

Despite very good documented laws as per ILO conventions, there is still a need to redefine the "discrimination" and apply it to all levels including the informal sector. At a time when the world is turning to the living wage concepts, we are still struggling with the issue of minimum wages. When it comes to women, the situation is even more bleak. Also we see less public discourse on the low wages for women in Pakistan. What is needed is a gender-based labour inspection mechanism applicable to all workers in all sectors.

The absence of any Anti-Discrimination Employment and Occupation framework aggravates the situation in all provinces. The inspection mechanism of ascertaining and determining wages and then transparently monitoring the wages being paid to the workers, especially women, remains an unattended task. Despite having minimum wage boards and institutional setups, the gap in the wages of men and women seen and reported remains unattended.

There is a need to have a provincial-based mechanism to keep check and record of the wages being paid to women in all sectors. A Provincial Anti-Discrimination (Employment and Occupation) Act 2015 has been drafted with the support of ILO which will predominantly look into equal remuneration for men and women. But it has yet to be debated.